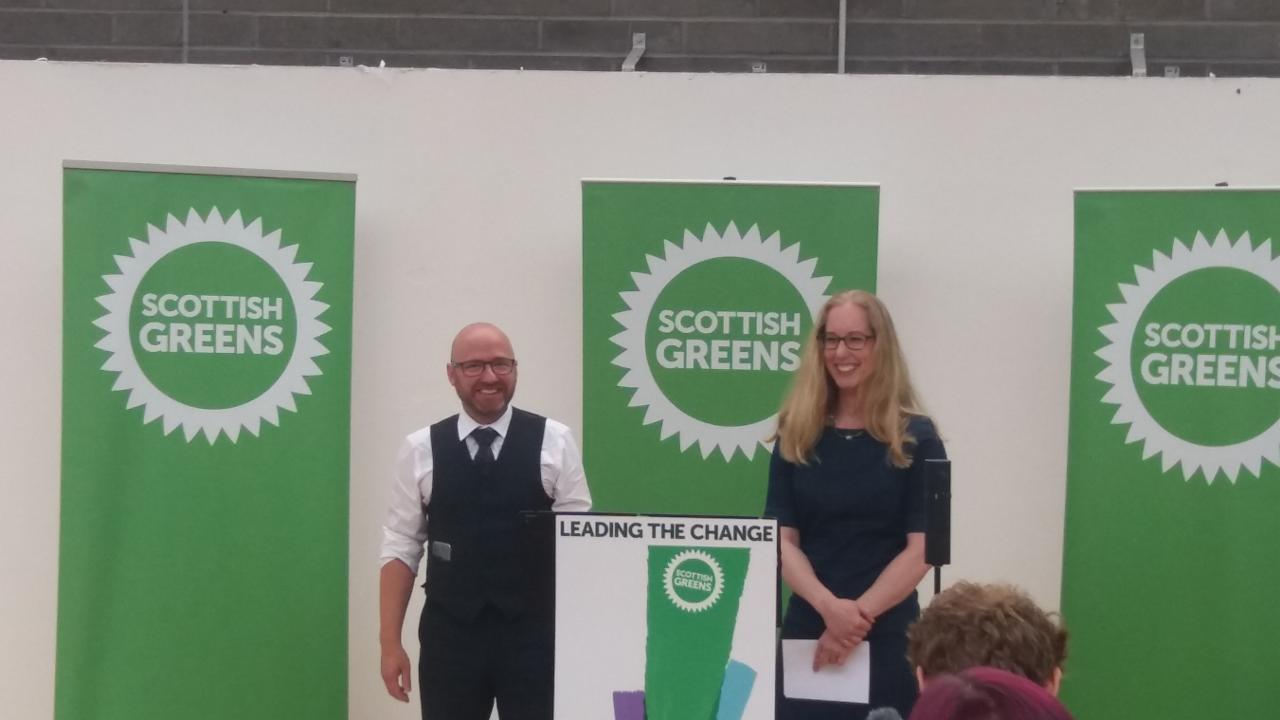 New co-leaders launch campaign to get more women and non-binary people elected, while the eco-socialist Green Futures Group sweeps the board

PATRICK HARVIE and Lorna Slater were today [1 August] announced as the winners of the Scottish Green Party’s first co-leadership election, with Slater immediately laying out plans to use her new role to increase the diversity of the party’s candidates in future elections.

The election follows the adoption of a new constitution by the party at their spring conference earlier this year, leading to the replacement of the former co-convener roles held by the Greens’ parliamentary co-leader and MSP Patrick Harvie and Maggie Chapman. As co-leaders, Harvie and Slater will serve a two-year term, leading the party into the next Scottish Parliamentary elections whilst acting as their chief spokespersons.

The results were announced at the Out of the Blue Drill Hall in Leith, where Slater had previously stood as the Scottish Green candidate in this year’s Leith Walk byelection. Prior to that, Slater – an engineer working in the renewable energy sector – had stood as the party’s Westminster candidate for the Edinburgh North and Leith constituency, and also stood as a Green candidate in this year’s European parliamentary elections. Earlier this year, she returned from Antarctica, where she studied the effects of climate change with a group of leading women working in science and technology.

The Green Futures Group, a recently formed ecosocialist current within the Scottish Greens which did not field a candidate in the co-leadership election, also announced today that all seven of their candidates for other positions within the party have been successfully elected.

Harvie, the only one of the Scottish Greens’ six MSPs to stand in the contest, will remain the party’s co-leader at Holyrood alongside fellow MSP Alison Johnstone.

Harvie said: “I’m absolutely delighted to be elected along with Lorna as one of the Scottish Greens Co-Leaders. Green voices have never been more important as we face up to the climate emergency. The science is clear – we have just over a decade to transform our economy for the better and avert an existential crisis, but the other parties are happy to carry on with business as usual.

“Greens have been leading the change by fighting for and winning a fairer income tax system, meaning most Scots pay less that their UK counterparts, and those who can afford it pay a bit more, we’ve delivered hundreds of millions for local services across the country and initiated a process to scrap the hated Tory council tax.

“As Co-Leader I’ll continue to lead the fight to transform our economy to put our climate and our communities first.”

“Green voices have never been more important as we face up to the climate emergency.” Scottish Green co-leader Patrick Harvie

Slater affirmed her commitment to helping the party win more parliamentary seats than ever before in 2021, and announced the launch of a Green campaign to get more women and non-binary people elected to office.

Slater said: “I’m excited to be elected Co-Leader and look forward to working with Patrick as we head toward our most important election in 2021.

“I look forward to contributing my expertise in marine renewable energy and manufacturing in Scotland to our proposal for a Scottish Green New Deal, ensuring that we take advantage of all the social and economic opportunities that come along with tackling the climate emergency.

“Scotland has significant renewable resources such as wind and tidal energy, we have the manufacturing and offshore infrastructure to become a powerhouse of clean energy generation. We can ensure everyone lives in a warm home which they can afford to heat and invest in reopening rail links and stations as part of a transport vision fit for the 21st century. We already have the skills and resources to transform our economy, tackle the climate emergency and create thousands of quality jobs along the way, and I’ll work to deliver that transformation in the coming years.”

Speaking to CommonSpace, Slater explained that the push to get more women and non-binary people elected was “a very informal campaign.”

She said: “We’re copying Women 50:50 – the theory being that women need to be asked, they don’t like to put themselves forward. We’ve got some graphics to show people, and we’ve got a cute little video – my husband’s an animator – trying to encourage women to stand. We’re going to have eight regional lists, and we want at least half of the people on those lists to be women, so that means we need more than 40 women and non-binary people.

“Last time around in Holyrood, we struggled to fill our lists, and we ended up stuffing some of the lists with men at the bottom. That’s not happening on my watch – we’re going to get all the women out. So we’re just trying to encourage people to have the courage to come forward.”

“It’s so important for under-represented groups to be represented in parliament – it’s not democracy if it’s not representative.” Scottish Green co-leader Lorna Slater

Asked if she felt recent concerns that the Scottish Government had let down Scotland’s non-binary community during the controversy over the Gender Recognition Act added urgency to the new campaign, Slater said: “Absolutely. More diversity is always better. It’s so important for under-represented groups to be represented in parliament – it’s not democracy if it’s not representative.

“We started already by setting up this campaign for the women’s network. Because so many of our candidates need to be women, five of our lists will be headed by women, and we’ll have more women in winnable regions in Glasgow and possibly another in Edinburgh. We need to win these seats, which means we need a functioning women’s network. So that’s going to be my focus – to get that network going so we can get those candidates.”

Guy Ingerson, one of the candidates for the co-leadership who had strongly supported the Green Futures Group, also told CommonSpace: “I’m thrilled with the results. Lorna and Patrick are a good combination of experience and energy, so I look forward to seeing what their leadership will bring. I think the campaign overall was really, really positive. I’m really chuffed I managed to get some of my ideas put forward.

“Obviously, I’m disappointed that I’m not co-leader, but I think this goes to show the level of talent we have in the party. The campaign was well-run, we had some great candidates, and I’m really happy with the result.”

Addressing the success of the Green Future Group candidates in their election to other positions within the party, Ingerson said: “The Green Futures Group is definitely the future of the party – at least for the next couple of years – so eco-socialism is alive and well within the party, and I’m really glad to see them elected. And I’m not going anywhere either, as an eco-socialist I’m still involved – in particular, trying to get the Green message out in the oil capital of Europe Aberdeen, and in the North-East. So I think it’s got a future and I’m excited to see what happens.”