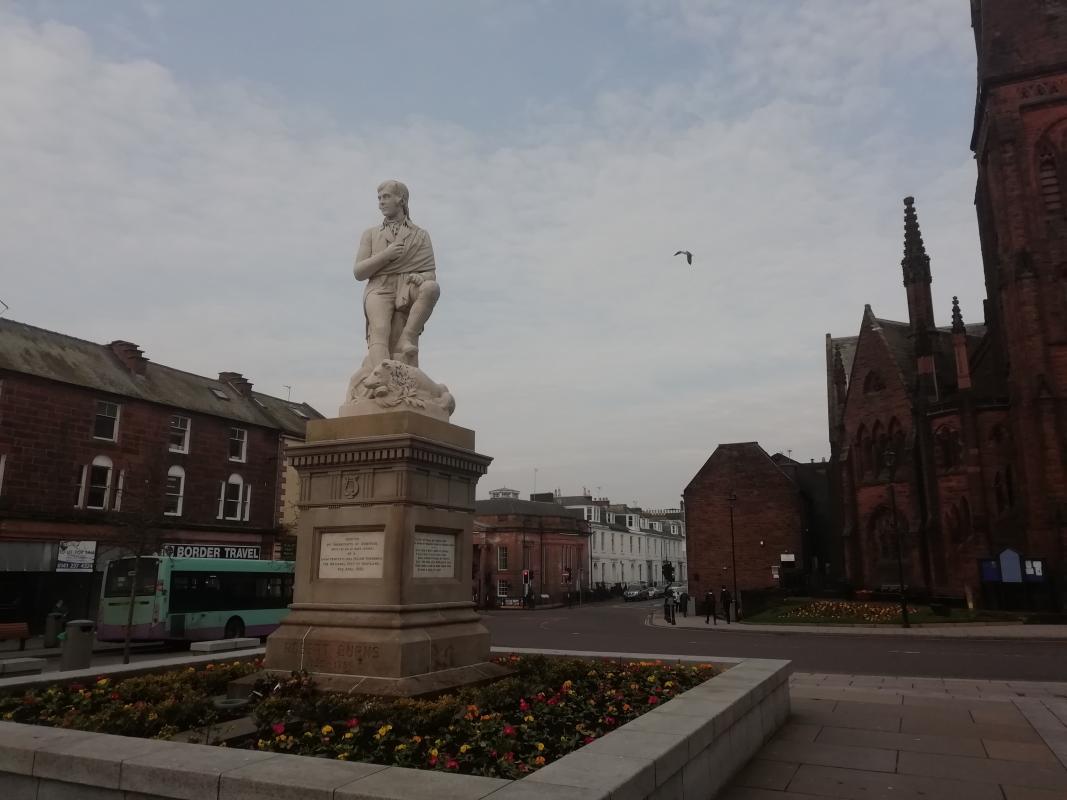 Dumfries town centre was once a major source of housing: now just one man lives on the high street. But community activists have a plan to change that.

IN 2016, ITV ran a piece on Dumfries, situated on the south-west of Scotland close to the border, titled “Dumfries ‘close to becoming a ghost town’”.

The ‘ghost town’ refrain is a familiar one to describe high street decline, but it’s not a title that many locals speaking to CommonSpace on Monday [25 February] thought to be particularly accurate.

The town of Robert Burns did not appear ghostly to us either. Sure, there are empty lots, but recent figures put the number of empty high street retail spaces to be at about one in ten across the whole of the UK. To the naked eye, Dumfries appears to be somewhere around the statistical average.

And there are clearly some exciting community projects going on which would not be found in the majority of Scottish towns. The Stove Network is a dynamic creative centre in the heart of the high street with a busy schedule of artistic plans and events, as well as various off-shoot projects specifically focused on using the arts to re-energise Dumfries town centre.

We visited one of those projects, The Oven, which was acquired through community asset transfer from the local council in 2018; the last council property to be sold on Dumfries’ high street.

What was previously a bakery is now being put to use as a creative hub for various projects. When we visited, a queer pop-up library was set-up, the sort of thing that would be quite normal to see in a big city like Berlin, but definitely something new in a quiet, rural town in Scotland.

But perhaps the most interesting thing about Dumfries town centre, and about The Oven specifically, is not what is going on at the ground level.

As Kevin Reid, creative producer at The Oven, tells us: “The town centre doesn’t look like a ghost town until you look up; that’s where the real problem is. A lot of the properties have trees growing out of the roofs, seagull droppings everywhere; a total mess.”

Reid showed us the upper level of The Oven, which he said had like most of the rest of the town centre not been lived in since the 1980s. Sure enough, old 80s carpets sat alongside damp walls. Reid says it was one of the better first floor lots on the high street, with most totally uninhabitable having been left derelict for decades.

According to Reid, there was a time when around 10,000 people in Dumfries lived in the town centre. It is now one of the most deprived parts of the town, and the number of people who live on the high street, specifically, has fallen to one.

The big plan for Reid and others involved, is not the shop fronts: it’s community housing. The upper floors of The Oven are set to be renovated for six to eight family size flats, and they are looking at buying another building at the back. The eventual aim is to build another block of flats to be connected by a communal space. They are discussing ideas for a common approach to factoring which would see the tenants taking responsibility for upkeep.

“We want to take a different approach to housing,” Reid said. “A shared living idea, which is about each other, not the individual.”

The Oven is part of a bigger scheme, the Midsteeple Quarter Project, which is seeking to buy and utilise a block of buildings for small independent shops and creative spaces as well as – crucially – housing.

“That’s the big thing here,” Evie Copeland, board member of the Midsteeple Quarter Project, who works in the housing sector, tells us.

Copeland is clearly passionate about re-populating the upper level of the town centre to make it alive with families, re-energising the high street economy in the process.

“Come to Dumfries town centre at five o’clock; there’s no one around. There’s no night time economy. Something has to change,” she says.

One of the main recommendations of the 2013 national town centre review, led by architect Malcolm Fraser, was to bring empty town centre properties back into use as affordable housing. But Copeland told us that for the council it can be more difficult and take longer than simply building new housing. With high purchase costs (and with absentee landlords means there is no one to approach to purchase the homes at all), as well as the skilled labour that’s required for renovation, it makes it a costly job.

That is potentially where community organisations with the time, patience and energy to pursue projects can come in. But as the Midsteeple Quarter Project has recently found out, community groups can’t compete in the open market with hedge funds and property speculators. The project lost out on one of the Midsteeple Quarter properties went it up at auction, with a bidder eventually buying the property for £150,000, a full £90,000 higher than the price it was valued at..

“It’s a different world,” Reid said. “Buying up random properties – to them it means nothing. Even if it gets into such disrepair that they end up making a loss, they’re buying so many properties in their portfolio that it all just gets packaged up together and sold on again.”

Scottish Government community ownership policy moved forward with the 2015 Community Empowerment Act, which gave communities the right to first refusal on properties up for sale in urban areas for the first time. However, they do not go so far as to level the playing field with international property speculators.

Kirstin McEwan, who works at The Stove Network on PR and marketing, is originally from Dumfries and moved back a couple of years ago having lived in Edinburgh and Glasgow. She says re-populating the town centre, as well as making it a creative and artistic hive of energy, would definitely attract more young people.

“There is an issue with an ageing population here. With the new campus nearby, there’s an opportunity to revitalise the town centre again. That’s what we’re trying to do.”

Speaking to mainly older people on Dumfries high street, most struggled to imagine the heart of the town centre being anything other than a commercial-focused space, but for McEwan, Copeland and Reid a different future for Dumfries town centre is in sight, starting with something rooted in the high street’s past: homes.