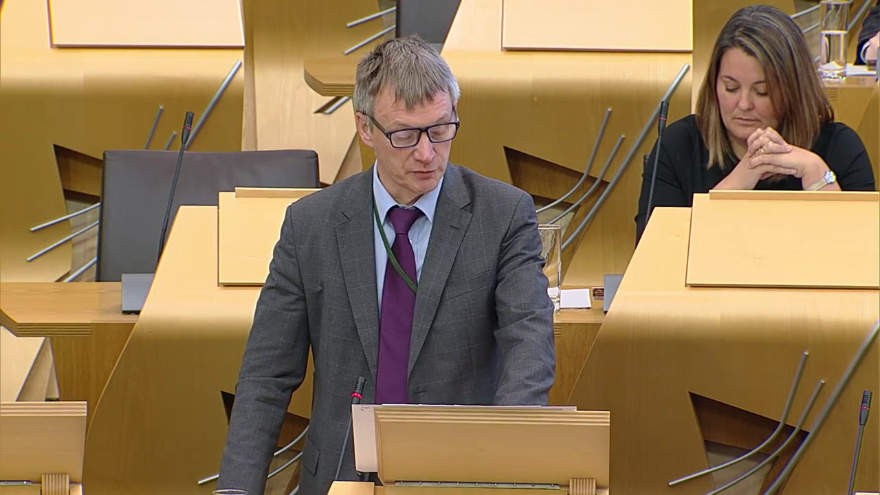 IVAN MCKEE is considering running in the upcoming SNP depute leadership election, the MSP has confirmed.

Speaking to CommonSpace, the MSP for Glasgow Provan said: “I have been asked by a number of people to think about that [running for depute leader], but it’s too early for me to have come to any conclusion.” Asked to confirm that he hadn’t ruled it out, McKee said: “Correct.”

Since Angus Robertson’s unexpected resignation last weekend, a number of SNP figures have been publicly speculated upon as potential candidates, but thus far only MSP James Dornan has said definitively that he is seeking nominations, while MEP Alyn Smith has said that he will not be standing.

Other names touted include MPs Tommy Sheppard, Joanna Cherry, Ian Blackford and Pete Wishart. Earlier today, the National reported that Wishart has confirmed he is considering it.

Earlier this week, McKee wrote in the National about the nature of the depute leader’s position without offering any comment on whether he would seek it, instead emphasising the need for clarity amongst the candidates on this. McKee wrote: “Whatever happens a coronation serves no one well.”

READ MORE: Tommy Sheppard: SNP deputy leader must have “the ear of the grassroots”

Expanding on this, McKee told CommonSpace: “I think it’s important that we understand what the purpose of the job is. That’s the first thing we need to do, before we start to decide or think about who should be standing and who’s the best person to do it.

“The way the timetable works out, we’ve got a period of weeks before the process is even going to formally start, which gives some space for that debate to take place around about what the nature of the job should be. And I think, over the next few weeks, as that clarifies, then I will look at it and see if it is something that I am interested in.

“I think [in] the last debate, the last time we had a contest, there were four different candidates, and each one of them had a different view as to what the purpose of the job was. As a debate needs to be had, if people focused on that for the next few weeks – focused on the ‘what’, rather than the ‘who’ – it’s going to make things more helpful when we come to deciding on the ‘who’.”

Asked what they key tasks would be for the new depute leader in the year ahead, whoever it ends up being, McKee replied: “Again, there may be a debate and they may come to a different conclusion, but my perspective on it would be that internal organisation is key, internal communication is key.

“So, making sure that the party organisation is in place to fight forthcoming campaigns, and to make sure the links between the party organisation and the wider Yes movement are robust, to make sure there is communication is all directions: it’s very much about listening to what the membership and the wider Yes movement have to say, and making sure that information and communication is shared, so everybody’s moving in the same direction.

“The wider Yes movement is clearly focused only on indyref. But I think the relationship is good.” SNP MSP Ivan McKee

Regarding the state of the relationship between the SNP and the wider independence movement, McKee said: “I think it’s fairly healthy. There’s clearly a lot of overlap. Now, people that are working within the SNP have clearly got other things they need to consider – for example, we’re the party of government. So, that plays a part. The wider Yes movement is clearly focused only on indyref.

“But I think the relationship is good. As I say, there’s a lot of overlap between local Yes groups and local SNP branches, but there’s always more work that can be done to get that ready for a campaign.”

Asked whether it was important that the new depute leader come from First Minister Nicola Sturgeon’s ideological wing of the party, or whether they might have distinctly different views, McKee responded: “I don’t think necessarily that ideology, if you like, is a major factor. At the end of the day, policy direction will come from party conference, decided democratically.

“Government policy will be based on a combination of party perspective and the reality of government.

“I think that the most important thing about the relationship [between the leader and depute leader] is that there’s a good, strong, tight working relationship. Clearly, the first minister has got many other things to consider – running the country, for example, amongst others. But frankly, I think that of all the names I’ve heard, I don’t think there’d be any issue with any of that, regardless of who it was.”

After noting those SNP figures who have already been publicly discussed as potential successors to Angus Robertson, CommonSpace asked McKee if he had heard of any other possible candidates within the party. McKee said: “There may well be – you hear rumours, but I’ve not heard anything substantial on anyone else. So, I wouldn’t like to comment on that.”

Given that the depute leader could emerge from the SNP’s Westminster group, its MSPs in Holyrood, or even theoretically from further afield (councillor Chris McElaney, leader of the SNP group on Inverclyde Council, ran in the last depute leadership election against Angus Robertson, but McKee stated he did not know whether McElaney would run again), CommonSpace asked whether McKee had any strong feelings about what area of the party the depute leadership should come from.

McKee replied: “No, but I think that brings us back to the first question, which is what is the purpose of the role. It could be, if you define the role in a certain way, then it means it should be somebody from the Westminster group to keep that communication coherent. Although to be fair, I think the current leader of the Westminster group and the First Minister have got excellent communication anyway.

“Other people have argued – for example, James Dornan – that it should be somebody based in Scotland, because that’s where most of the work has to happen. So, there’s a number of different perspectives on that, and I think the debate over the next few weeks about the purpose of the role will maybe help to clarify that, and that may give more clarity on who we might be talking about.”

“Other people have argued – for example, James Dornan – that it should be somebody based in Scotland, because that’s where most of the work has to happen. So, there’s a number of different perspectives on that.” SNP MSP Ivan McKee

In recent months, McKee has been notable as one of the SNP’s more prominent proponents of solidarity with Catalonia during its independence struggle and the subsequent crises that have arisen from the Spanish Government’s response.

Given how passionately the issue excited the SNP grassroots at the party’s October conference, McKee was asked whether Catalonia was still a major issue for the SNP, and whether its ongoing situation would once again become a high-profile point of discussion for the party.

McKee said: “I think, as internationalists, we look at the situation in many countries around the world, often with concern. There’s a dozen countries we’d be looking at, at the moment, saying we’re concerned about things, and Catalonia is one of them.

“Clearly, the amount of activity that happens within the party on that will depend on what happens in terms of the situation. Since the December election, I don’t think it’s a fact that people in Scotland or in the SNP are any less interested in it. I think that’s just driven by the news agenda, frankly – things happen.”

Asked if he would back calls this week by Amnesty International that the Spanish authorities release several Catalan political prisoners, McKee stated: “Absolutely. That’s significant, and we’d support that – ‘we’ meaning people that are campaigning or are very supportive of the Catalans.”