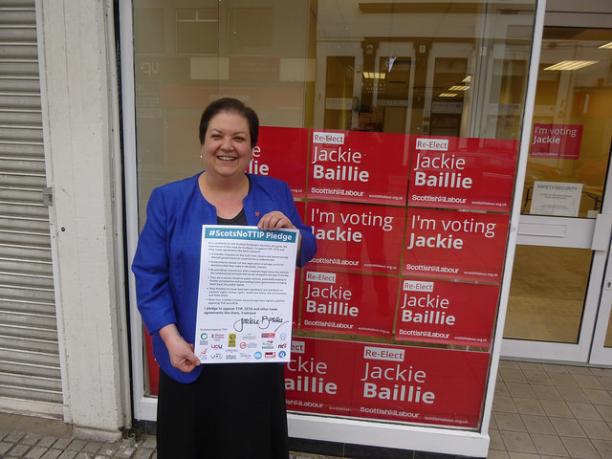 Jackie Baillie had planned to run on a job share ticket with fellow MSP Pauline McNeill.

Baillie had initially agreed to run on a joint ticket with MSP Pauline McNeill and job share the post, but the move was rejected due to the agreed procedure not allowing for such a proposal.

The party’s ruling committee had agreed the terms for the contest on Saturday [11 January], with no proposal for a job share raised at that point.

Baillie was elected to the Scottish Parliament in 1999 and has remained the party’s only constituency MSP to hold a constituency seat continuously.

In a statement announcing her campaign, Baillie said: “I can’t sit on the sidelines any longer and watch my Party decline. That’s why today I am announcing my candidacy as Deputy Leader of the Scottish Labour Party.

“I am disappointed that my plans to unite with my friend and colleague, Pauline McNeill, have been rejected, but I look forward to working with her to rebuild our beloved party regardless of whether we share a candidacy or not.

“The future of our party is hanging in the balance. We experienced two crushing defeats in 2019 and the Scottish electorate did not feel able to put their trust in Scottish Labour. As a result, the party lost all but one MP. The result has meant that communities across Scotland have been subjected to another five years of Tory austerity, on top of the more than a decade of SNP cuts that they have already had to endure.

“Voters lost trust in our leadership and were confused by our manifesto. The inconsistent message that came from senior figures within the Labour Party on the two biggest issues facing Scottish voters – Scottish independence and Brexit – meant that the electorate did not know what the Party stood for and instead went elsewhere.

“If Scottish Labour does not accept responsibility for the result and take drastic steps to change, then the Party will become a residual force in Scottish politics. My aim is to unite the Party and bring members together from across the political spectrum, in order to rebuild the Party for the future.”

Despite the call for unity, Baillie has previously been accused of causing division in the party by Labour insiders.

CommonSpace revealed in August how a “kamikaze unionist” group of MSPs, allegedly led by Jackie Baillie, had released a statement on a second independence referendum against the wishes of Scottish leader Richard Leonard.

The statement came during the General Election after shadow chancellor John McDonnell appeared to suggest Labour would support Scotland’s right to self-determination.

Speaking at the time, a senior Scottish Labour source told CommonSpace that the move was the action of “wolves in sheep’s clothing” intended to undermine Leonard’s left-wing leadership.

Update: This article was updated to clarify why Jackie Baillie and Pauline McNeill’s “job share” proposal was not allowed.