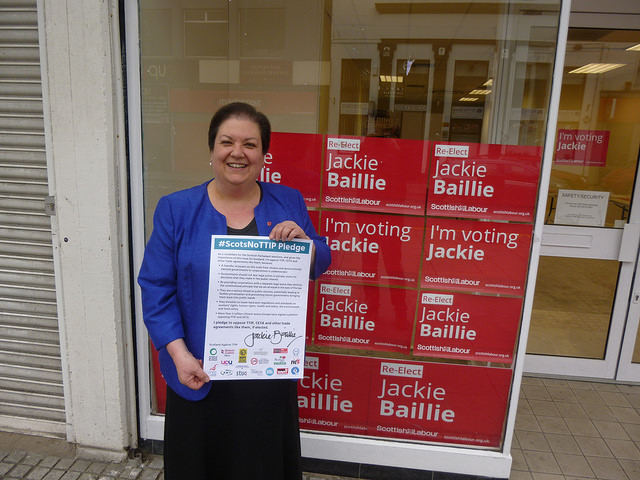 Jackie Baillie has joined Monica Lennon, Neil Findlay and Alex Rowley in declaring they will not stand as Kezia Dugdale’s successor

JACKIE BAILLIE, the veteran Labour MSP, has told CommonSpace this morning that she will not be standing for the Labour leadership in the aftermath of Kezia Dugdale’s resignation on Tuesday.

This follows similar announcements regarding three other high-profile Scottish Labour politicians, interim leader and former deputy to Dugdale Alex Rowley, Scottish Labour’s inequalities spokesperson Monica Lennon and former Scottish campaign chief to Jeremy Corbyn Neil Findlay, all of whom will not be pursuing the job of Scottish Labour leader.

Baillie said: “I will not be standing for the Labour leadership.”

Yesterday, Rowley told press: “I have no ambition to be the first minister of Scotland. It is never something that I have seen myself doing, so I have no intention of running for leader because whoever is in that job, their focus should be becoming the next first minister.

“I am happy to continue with the work that I am doing, working in the party, building the Labour movement from the grassroots up, that is where my focus has been.

“I am much more comfortable doing that than I would be trying to be the first minister.”

READ MORE: In the spotlight: These are the names tipped to be the next Scottish Labour leader

Findlay stated in a press release sent out on Wednesday morning: “I will not be putting put my name forward in this election,” while several press sources reported yesterday that Monica Lennon will also not be running.

According to the Herald, Anas Sarwar, a former deputy leader, is reportedly considering standing for the leadership, while speculation grows that Richard Leonard, a trade union stalwart, may emerge as the favoured candidate of the Scottish Labour left.