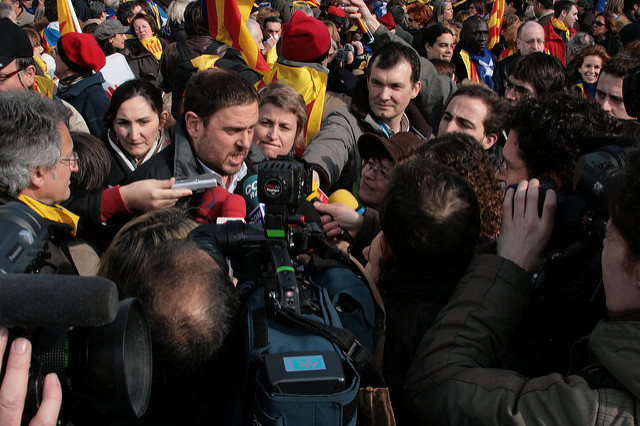 ORIOL JUNQUERAS, the imprisoned vice-president of Catalonia, should be regarded as the legitimate successor to Carles Puigdemont, the major pro-independence Catalan party Esquerra Republicana (ERC) has argued.

This followed a vote in the Catalan parliament on a symbolic resolution, wherein pro-independence parties successfully recognised Puigdemont as the legitimate president on 1 March, despite him being unable to return to Catalonia due to legal threats from Spanish authorities.

In the same address, Puigdemont also announced that he will be bringing lawsuit against Spain before the UN Human Rights Committee.

Puigdemont, who represents the chief pro-independence party Junts per Catalunya, went on to propose Jordi Sànchez, the pro-independence grassroots leader and party colleague who has been imprisoned for four and a half months on charges of sedition, as a possible successor.

It was initially reported by English language Catalan news outlet Catalan News that it was presumed Sànchez had gained the blessing of the other two major pro-independence parties, the CUP and the ERC, both of which are to the left of Puigdemont.

However, the ERC has subsequently argued that Junqueras, as vice-president, is next in line for the position if Puigdemont’s provisional renouncing of his office takes effect.

Sergi Sabrià, a spokesperson for ERC, emphasised in an interview with Catalan public radio on Friday that negotiations to form a new Catalan executive were not complete, saying: “It’s true that the agreement is not closed.”

Sabrià added that Puigdemont stepping aside “is an important step to starting to have an effective government”.

Despite the ongoing negotiations, the fact that both Junqueras and Sànchez are in prison makes it difficult for either of them to be sworn in, as the Spanish Government has remained opposed to any imprisoned individual taking up the position.

Spanish Government cabinet spokesperson Íñigo Méndez de Vigo said that “if there is no legally formed government, Article 155 will continue,” indicating that direct rule from Madrid may not be interrupted, regardless of who assumes the presidency.