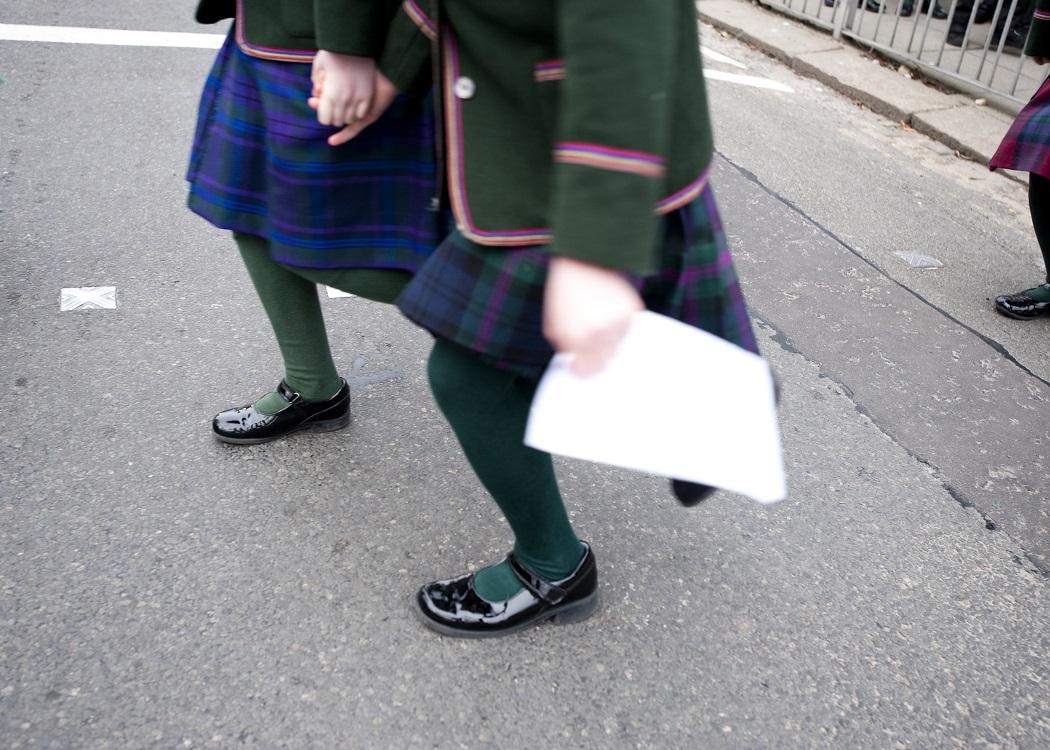 THE start of the school year always brings a mixture of apprehension and excitement for all concerned; this year, however, has also seen the emergence of Back to School Banks, an initiative set up by Deborah Shepherd and Sandra Douglas to provide school uniforms and vital materials to students from low-income families.

As part of their campaign the founders have also written to Education Secretary Angela Constance calling for a national uniform policy of simple black and white clothes, thus allowing parents to access the most cost effective form of uniform possible rather than being forced to line the pockets of expensive high-street stores and specialist suppliers.

As reported in The National last week , the freedom available to schools to set their own uniform policy has led to some demanding students be kitted out in PS120 blazers, branded polo shirts and utterly ludicrous PS10-a-pair gym socks (whoever made that particular decision should, in all seriousness, take a long hard look at themselves and consider whether they are in the right job).

There is a far bigger issue to be addressed here, centred around the inability of the government, opposition parties and Scotland’s broader educational establishment to address things which simply do not work.

If schools are to continue to insist that their students wear a uniform then Shepherd and Douglas are entirely correct to argue that it must be accessible to all, especially in light of recent BBC research showing that the average clothing grant for a secondary school pupil is just PS58 (PS12 less than the government’s already inadequate recommendation of PS70).

While it is going too far to suggest a single uniform be used across all of Scotland’s schools, there is certainly a good case for the implementation of a nationwide ban on the use of ‘branded’ uniforms and the over-zealous control of pupil attire.

At the very least, uniform requirements should not be permitted to go beyond a demand for standard items available from generic retailers.

If the Scottish Government is serious about addressing educational inequality then it cannot simply ignore the fact that, in an increasing number of schools, the cost of complying with the dress code is both prohibitive (to the point where it could be considered a form of back-door selection) and utterly indefensible.

There is, however, a far bigger issue to be addressed here, centred around the inability of the government, opposition parties and Scotland’s broader educational establishment to address things which simply do not work. Uniform, it turns out, is a particularly good example of this.

Many grand claims are made about the benefits of school uniform, and the government position is that schools should have a uniform policy (even though pupils and parents cannot legally be compelled to comply with it). The problem with a number of these claims is that they are not supported by evidence.

Proponents of school uniform argue, for example, that it helps to reduce bullying because it puts all students on the same level and, in the words of one school handbook, “protects children from the harmful effects of social distinction and competitive dressing”.

According to Dr Anthony Volk of Brock University, “no evidence in bullying literature that supports a reduction in violence due to uniform”.

This position offers a seductive appeal to the nebulous concept of ‘common sense’ (if students are all dressed the same then they cannot bully each other for their clothes) but is, ultimately, based on assumptions, assertions and anecdotes; there is, according to Dr Anthony Volk of Brock University, “no evidence in bullying literature that supports a reduction in violence due to uniform”.

Realistically this is not surprising – with or without uniform teenagers will be able to differentiate themselves and their friends from others, with a student’s clothes being just one potential factor which could lead to them being bullied.

Attempting to eliminate this particular factor from day-to-day school life may seem reasonable but to suggest that simply removing an apparent catalyst for bullying is an appropriate way to address a broader cultural problem is as simplistic as it is insulting.

Furthermore, this sort of argument echoes at least in part the intellectually and morally bankrupt reasoning of those who believe that women should not dress provocatively if they wish to avoid sexual assault – rather than dealing with a serious underlying issue it simply lowers a shameful smokescreen by demanding conformity to an arbitrary norm, all the while deliberately failing to address the real root of the problem.

The reality is that uniform policies as anti-bullying measures simply shift unacceptable behaviour onto factors which are less visual, less obvious and, ultimately, less likely to result in intervention from school staff.

In addition to this they reinforce the appalling idea that the best way for people who are somehow ‘different’ from the norm to avoid bullying is simply to conform and blend in, and that is absolutely not a lesson that we should be teaching in our schools.

The other misguided defence of school uniform concerns the belief that it will boost overall pupil performance but, again contrary to apparent public perception, there is no good evidence that the imposition of a school uniform boosts academic attainment or pupil attitudes to their work.

In actual fact, research has shown “an overwhelming pattern of non-effectiveness of school uniforms” with the only clear and consistent impact being a “small, weak, yet statistically significant negative effect of uniform policies on academic achievement”.

To put it simply, if uniforms do anything at all they make things very slightly worse. The assumed link between school uniform and better results is founded not in proper analysis of reality but in the historic class divisions of British society where the correlation between the blazers and badges of private schools and their superior academic performance is mistaken for a causal relationship.

The other defence of school uniform concerns the belief that it will boost overall pupil performance but, again contrary to apparent public perception, there is no good evidence a uniform boosts academic attainment.

Extraordinary claims should require extraordinary evidence but in this case, where we are supposed to believe that particular forms or colours of cotton have the ability to boost academic achievement or reduce unacceptable behaviour among teenagers, even ordinary evidence is notable only by its absence.

As sociologist and researcher David Brunsma points out, school uniforms are popular because they are precisely the sort of “superficial glossing over of complex social, demographic, cultural, material and political issues” that can gain the backing of policy-makers, commentators and many, many parents.

His conclusion after eight years of research is simple: “The results, although surprising to many, simply cannot be ignored. Uniforms do not make our schools better.”

School uniform policies are deemed necessary not because they work, but because they are a visible, immediate and comparatively simple measure. They are, therefore, an ideal focus for those who wish to gain plaudits for improving education (whether nationally or simply within their own institutions) despite being unwilling or unable to make any of the genuinely difficult decisions necessary for such an aim to be achieved.

And that, more than anything else, is the real crux of the matter: Scottish schools are not struggling to meet our expectations because of the insistence on uniform, but because of the damage done by the bloody-minded refusal to acknowledge that many of the assumptions which underpin our whole approach to education are simply wrong.

Take Nicola Sturgeon’s ‘pledge’ , plastered across the cover of The National this morning, that every child in Scotland “will be able to fulfill their potential”. As a means of achieving this Sturgeon has already backed the Attainment Scotland Fund, an initiative seeking to replicate the approach of the London Challenge (from which she stated that the government would ‘draw heavily’) in boosting exam results among those from disadvantaged backgrounds.

This all sounds very promising and no doubt looks good on the front page of the newspapers but, once again, it is flatly contradicted by evidence showing that increased immigration, not government intervention, led to the remarkable turnaround in performance of London’s schools.

Until we are willing to look at our education system with a genuinely critical eye, to ask difficult questions, to challenge vested interests, to put our assumptions and conveniences to one side and, finally, to put the needs of our children first, there is no prospect of the first minister’s latest pledge – to end educational inequality in Scotland – becoming a reality any time soon.