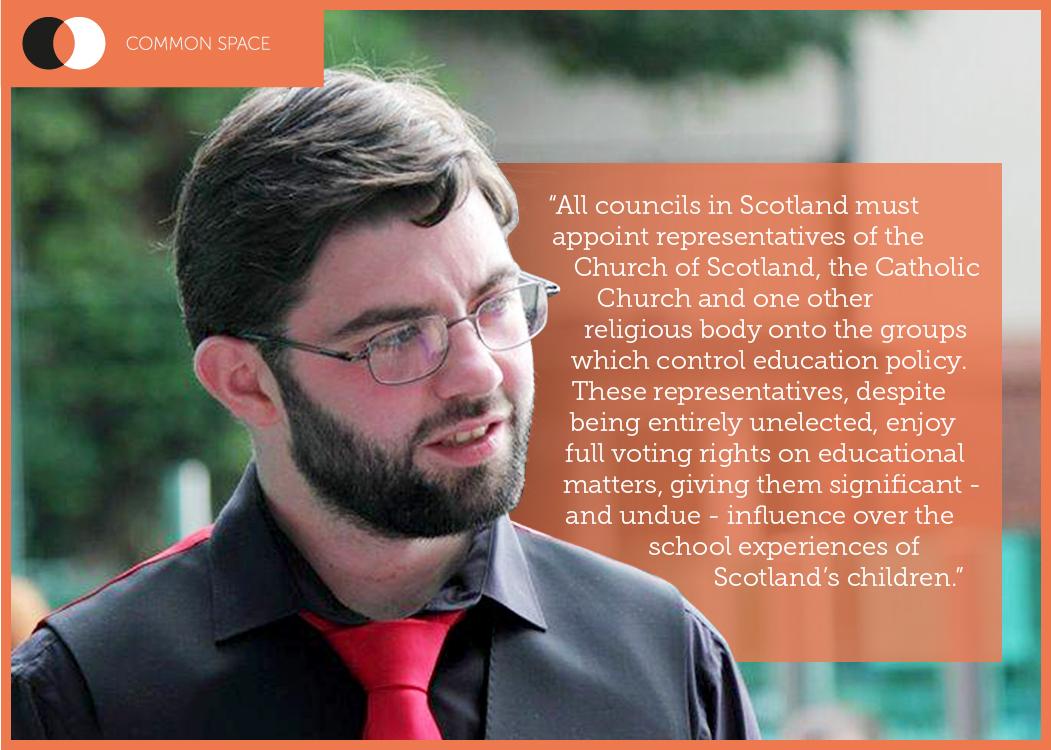 THIS WEEK the Humanist Society of Scotland (HSS) launched theEnlighten Up campaign for educational reform in Scotland.

The initiative calls for young people to learn objectively about all faiths and beliefs, for the construction of an education system which is truly inclusive of everyone, and for the removal of unelected religious representatives from council education committees.

In the immediate term the campaign is focused on the latter issue, with HSS asking supporters to sign a petition calling for a long-overdue change in the law .

Key areas of Scottish society have become increasingly secular over time, a fact which reflects the declining religiosity of the people of this country.

As a recent University of Glasgow report – commissioned by HSS – pointed out, key areas of Scottish society have become increasingly secular over time, a fact which reflects the declining religiosity of the people of this country.

In some of the most recent polling carried out, 68 per cent of Scots agreed with the statement: “Organised religion is not for me.” Attendance at religious services is also in steep decline, with census data showing a continuing drop in people identifying with a religious faith and survey data putting the number of 14-17 year olds with ‘no religion’ at more than 70 per cent.

Accordingly, religious influence in various aspects of public life has been gradually rolled back, with the introduction of equal marriage rights a high-profile, but far from isolated, example.

Troublingly, however, this shift has not been reflected in the education system, where a range of religious privileges remain stubbornly in place, the beneficiaries of an ‘aye been’ mentality and a reluctance to risk upsetting groups with vested interests in the status quo. Religious reps on education committees are one of the clearest examples of this.

Under the Local Government Act (Scotland) 1973 all councils in Scotland must appoint representatives of the Church of Scotland, the Catholic Church and one other religious body onto the groups which control education policy (or to the full council if no education committee exists).

Accordingly, religious influence in various aspects of public life has been gradually rolled back, with the introduction of equal marriage rights a high-profile, but far from isolated, example.

These representatives, despite being entirely unelected, enjoy full voting rights on educational matters, giving them significant – and undue – influence over the school experiences of Scotland’s children.

The usual suspects will no doubt decry any attempt to address this issue as an example of the ‘aggressive humanism and secular atheism’ seeking to destroy society and drag us all towards some sort of Dantean damnation; the hard truth is that the legal imposition of unelected religious representatives flies in the face of basic democratic accountability.

As things stand, the local electorate simply cannot remove three individuals from a supposedly democratic organisation which is supposed to represent them. To make matters worse, the current law can even be employed to circumvent the electoral decisions of local people.

Back in 2003, Hugh Halcro-Johnston – who had served as a councillor in Orkney for 22 years – was defeated, losing his seat to Iain MacDonald; despite this, Halcro-Johnston returned to the council as a religious representative on the education board, thwarting the will of a local electorate who had clearly rejected him. Such events are more than problematic, they are positively anti-democratic.

Troublingly, however, this shift has not been reflected in the education system, where a range of religious privileges remain stubbornly in place.

This means that in nearly 60 per cent of Scottish councils a group of unelected and unaccountable individuals with no democratic mandate are able to wield enormous power.

This isn’t just an abstract or theoretical problem. In 2012 a row broke out at Highland Council after the votes of unelected religious representatives helped to defeat the ruling administration over plans for the location of a new Gaelic-medium school (the proposals were defeated by a single vote).

Of course, local authority education boards should be able to seek the views and advice of a range of people from their communities, and there is no suggestion that religious organisations or individuals be banned from contributing in this way.

Nor is there any problem with members of religious communities standing for election to their local council and becoming fully – and legitimately – involved in local democracy.

What is not acceptable is a situation which leaves local people powerless, with religious organisations guaranteed entirely unjustifiable seats at very powerful tables across the country.

What is not acceptable, however, is a situation which leaves local people powerless, with religious organisations guaranteed entirely unjustifiable seats at very powerful tables across the country.

The inevitable howls from those whose privileged position is finally coming under scrutiny should not distract us from the fact that the status quo actively undermines democracy and accountability.

The legal requirement for unelected religious representatives on council education boards is utterly anomalous, reflecting the expectations of a world which no longer exists – it’s time for change.