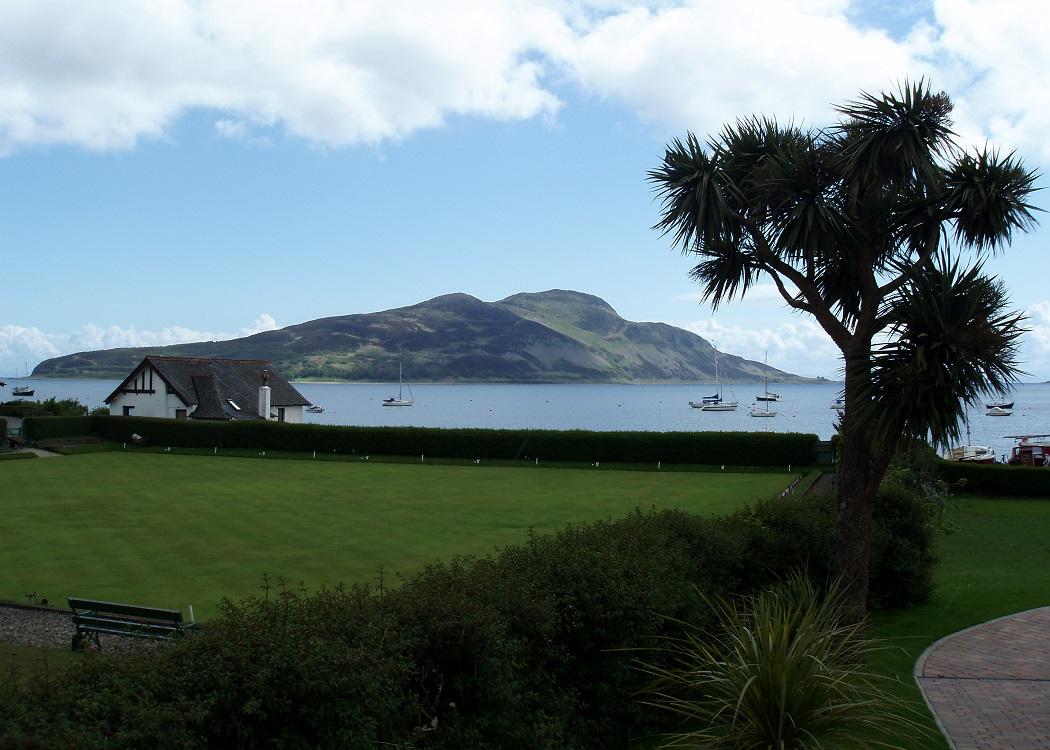 For many Scots, especially those who remember the days when family holidays involved a trip to Saltcoats rather than Salou, the island retains a special place in their heart; even for a good deal of those who have never been there, the sight of that distinctive granite skyline rising out of the Firth of Clyde has enhanced many a journey around Ayrshire’s sadly-declining coastal towns.

From the 19th century until its heyday in the 1960s and 1970s, thousands of Scots, mostly from the nation’s industrial heartland, made the journey to Brodick – the island’s ‘capital’ – to spend their holiday on the beach beneath the towering peak of Goatfell.

Despite the work of the Save Brodick Beach campaign little progress has been made in halting the decline.

For decades, Brodick Beach – complete with beach huts, boats for hire and countless happy families – was one of the crown jewels of Arran’s tourist appeal; today it has all but disappeared, it’s loss the consequence of rapid erosion precipitated by the practice of extracting sand for export.

Despite the work of the Save Brodick Beach campaign little progress has been made in halting the decline and now the remains of the beach, a coastal footpath and the village’s extremely popular golf course are at risk.

A similar, though arguably even more serious, problem exists for the residents of Lamlash – the largest village on the island and its administrative centre – who now face the prospect of watching their village green fall into the sea.

Like Brodick’s beach, Lamlash green is a central and vital feature of the life there, offering space for visitors to make their way along the shoreline; connecting the popular Corden holiday park to the village’s largest pub via a number of hotels, restaurants and shops; and, especially during sunrises of spring and early autumn, offering one of the finest views available in the whole country as a carnival of colour unfolds around Holy Isle out in the bay.

But the green is much more than a tourist draw for the village: in a purely practical sense it acts as a crucial defence against flooding of the buildings (both residential and commercial) closest to the water and holds back the sea from the single road which runs through the village and around the coast of the island as a whole (closure of any one section of which can result in 30-mile, hour-long detours for islanders). The local sewage pipe is also buried two metres beneath the green.

As the out-pouring of anger from both residents and regular visitors shows, however, the importance of Lamlash green cannot be measured in terms of raw practicalities – it is also an important aspect of the quality of life for the village’s residents.

Throughout the year it hosts public events such as Christmas celebrations, Bonfire Night and the local gala while also providing a focal point for wider village life – it is where people walk their dogs, meet their friends, spend time with their children and generally enjoy living in this beautiful part of the world.

Arran’s economy may now depend on tourism, but the value of these public spaces goes far beyond the seasonal financial boost generated by the island’s many, many visitors.

A similar problem exists for the residents of Lamlash, who now face the prospect of watching their village green fall into the sea.

For the 5,000 people who live there all year round – a third of whom reside in Brodick and Lamlash – the loss of village beaches and greens would be devastating. It would also do further damage to attempts to draw new residents to an island with a declining and aging population.

While critical gazes often fall on local authorities under such circumstances it is important to note that the council does not actually own the land in question; as such, its ability to intervene (and willingness to spend significant amounts of public money) is limited.

Both Brodick Bay and Lamlash green can be saved but, as things stand, residents of these villages are at the mercy Arran Estates (the company controlled by landowners the Ffordes), North Ayrshire Council and a number of public bodies such as Marine Scotland and SEPA.

At present, the council leases more than 50,000 square metres of land from Arran Estates at an annual cost of PS33,812. The bulk of this – PS32,595 – buys access to the semi-industrial area to the south of Brodick pier where the waste transfer station, landfill site and roads depot are located; just PS191 (0.6 per cent of the total cost) is spent annually to lease ‘public’ areas in Brodick and Lamlash (with the foreshore in Whiting Bay costing an additional PS26 per year) from Arran Estates.

The Local Authority has received significant criticism for its handling of these issues, much of it justified (waiting for the erosion of Lamlash green to threaten the road in 10-30 years is, for example, appallingly short-sighted).

That said, its reluctance to spend six-figure sums of limited public money rescuing land which is privately owned is understandable, especially when the costs involved would, according to a recent report, dwarf even a 500-year lease fee for these same spaces.

A number of options have already been considered by locals but, for now at least, it seems that the best solution would be for the ownership of both Brodick Beach and Lamlash green to pass from the Fforde family to North Ayrshire Council.

From the point of view of the landowners, offering to hand over these areas to the council in exchange for a promise to restore, protect and maintain them for public use would allow the Fforde’s to emerge as the heroes of the piece at a cost of less than PS200 per year.

Of course, local authority control of public space is no guarantee of progress for a community – a fact highlighted by the scandal around Argyll & Bute Council’s handling of the Castle Toward affair earlier this year – but with public ownership would come, if nothing else, democratic accountability and the financial clout to protect these vital local resources (and with them the villages and their people).

Both Brodick Bay and Lamlash green can be saved but, as things stand, residents of these villages are at the mercy Arran Estates (the company controlled by landowners the Ffordes), North Ayrshire Council and a number of public bodies.

As the Our Land campaign has highlighted, communities across Scotland face challenges rooted in our appalling patterns of land ownership and management, whether that be the threat to community spaces in isolated island villages, the proliferation of derelict land in urban centres, the chronic dearth of affordable housing across Scotland, long-term mismanagement of the marine environment, prevention of local renewable energy projects or the scandal of titles to three quarters of a million acres of Scottish land being held in tax havens.

Despite initial praise for the Scottish Government’s forthcoming Land Reform Bill there are concerns that much of what was originally proposed has been either watered down or removed entirely, leaving little prospect of genuinely radical reform of the way in which Scotland’s land – the nation’s greatest resource aside from its people – is owned and managed.

Meanwhile, the people of Brodick and Lamlash look on as the future of their villages is threatened. In cases such as this the private control of what any reasonable person would regard as public land is not just demonstrably unsustainable, it is also morally indefensible and, crucially, is clearly not in the interests of the people who should matter most: the local community.

For the landowners the areas in question have little, if any, real financial or commercial value (and will have even less once they disappear under the waves); for the communities built around them, however, this land – their land – is priceless.