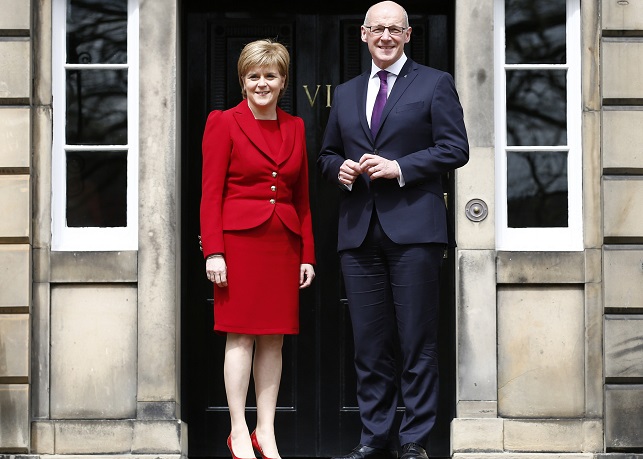 AS expected, Scotland has a new education secretary.

Having reshuffled her cabinet, Nicola Sturgeon has put Angela Constance out of her misery, replacing her with former finance secretary, and current deputy first minister, John Swinney. As various people have kindly pointed out on Twitter, I didn't exactly see this move coming but, in hindsight, it makes perfect sense.

As various commentators have already noted, this move is designed to prove to everyone that education is indeed the top priority over the next five years. Swinney is, quite simply, the biggest hitter available to the first minister, and handing him the education portfolio is clearly a sign of intent. So far, however, there has been little attempt to discern precisely what that intention may be.

For various reasons, the pressure on the SNP over education is only going to intensify in the coming months and years.

Let’s be honest: it had become painfully clear that Angela Constance was out of her depth. A series of shaky media appearances highlighted her weaknesses, and the mauling she received at the EIS hustings meant that it was really a question of when, not if, she would be moved on.

For various reasons, the pressure on the SNP over education is only going to intensify in the coming months and years – regardless of anything else he might bring to the role of education secretary, it is unthinkable that Mr Swinney would be seen as an easy target for interviewers, journalists and political opponents. His appointment is, at least in part, intended to shore up the SNP’s PR defences.

But there is more to it than that. For all the bluster, education remains an area of major weakness for the SNP government: Curriculum for Excellence is in serious trouble, the regionalisation of Further Education has failed, and the teaching profession has become increasingly hostile in response to a party for whom the opinions and expertise of educators seem to be an annoyance rather than an asset.

Shifting John Swinney to Education is an acknowledgement of the conflict awaiting the SNP in coming months.

John Swinney's appointment is, at least in part, intended to shore up the SNP’s PR defences.

Despite months of increasingly desperate arguments from the SNP, its plans to impose national standardised testing on children as young as five remain mired in controversy. Yesterday, the Herald newspaper reported on the concerns of the National Parent Forum of Scotland – which had previously been supportive of Sturgeon’s plans – around the likely impact on pupils. Swinney’s first act in his new role was to (unsuccessfully) attempt to reassure people that his party’s plans aren’t quite as bad as people were suggesting – hardly an auspicious start.

As the implementation date for this policy gets closer, and opposition continues to grow, Swinney will find himself fighting on a number of fronts to defend a policy that even many SNP members agree should be abandoned.

The new education secretary is also staring down the barrel of massive, unprecedented industrial action from all three Scottish teaching unions. As of next week the EIS – which represents the vast majority of teachers in Scotland – will ballot its members for action which amounts to a wholesale boycott of SQA-related work. The SSTA and NASUWT are pursuing similar action.

This comes after a second government working group failed to present adequate proposals for tackling issues around excessive workload and bureaucracy, making the union’s decision a clear vote of 'no confidence' in this government’s ability, and willingness, to resolve the issues faced by educators. When confronting this problem, Swinney would do well to remember that teachers’ working conditions are students’ learning conditions, and act accordingly.

Another major issue facing the government is the inevitable opposition to another aspect of its education policy – the removal of some, or all, educational responsibility from local authorities.

Another major issue facing the government is the inevitable opposition to another aspect of its education policy – the removal of some, or all, educational responsibility from local authorities.

Though the wording of the manifesto was deliberately, contemptuously vague, it is clear that Sturgeon is keen on the creation of some form of regional education boards. She will no doubt try to sell this change as a move to "decentralise management and support", when the reality is that the SNP is seeking to establish a 'command and control' structure in Scottish education, a move which will actually lead to greater centralisation of power.

It also seems likely that the government will pursue some form of experimentation with Tory-style Academies (although it will of course insist on using a different name), with a decision on the conversion of St Joseph’s primary school in Milngavie into a free school still to come.

These moves will be rightly opposed not just by teaching unions, but also by local authorities themselves, and installing Swinney, of all people, as education secretary looks very much as though Nicola Sturgeon is gearing up for a fight with Scotland’s councils.

Remember that just a few months ago his funding offer was described by Cosla as "an affront to local democracy", with the Scottish Local Government Partnership (which represents Aberdeen, Glasgow, Renfrewshire and South Lanarkshire councils) adding that they were being "held to ransom" and that the relationship between local and national government was now "broken". It is difficult to see how that relationship can be repaired if Swinney leads the latest charge against local councils.

It also seems likely that the government will pursue some form of experimentation with Tory-style Academies (although it will of course insist on using a different name).

Nicola Sturgeon has staked her political reputation on reforming Scotland’s education system, which is why Swinney has been handed the job – he is there because she trusts him to 'get the job done'. Unfortunately for the new education secretary, if he is really to rescue Scottish education then he will have to do what his predecessor clearly could not: tell the boss that she is wrong.