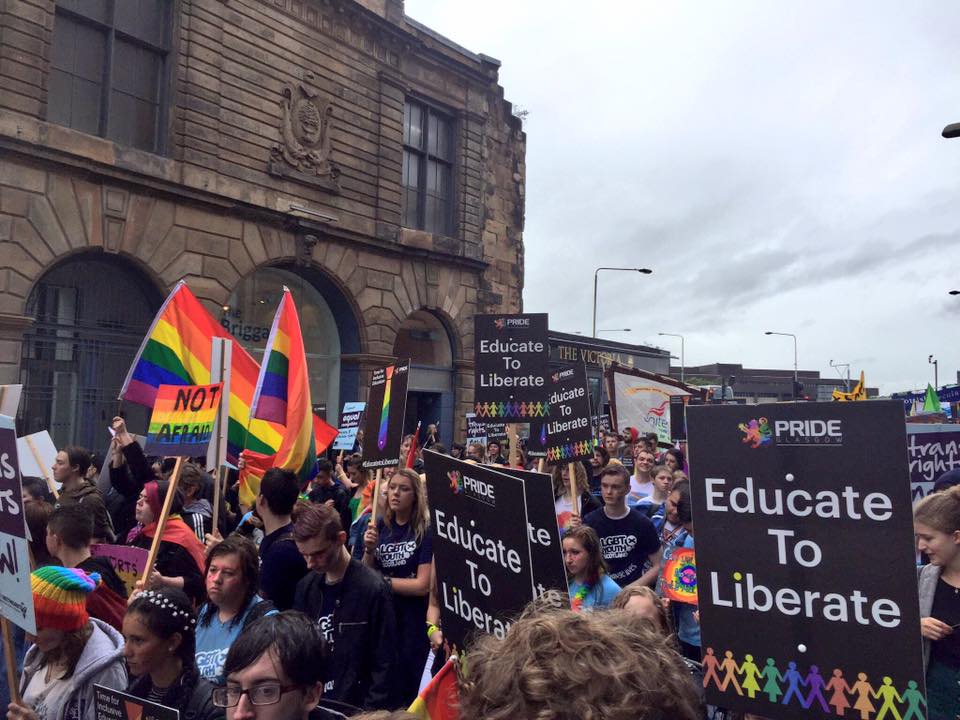 CommonSpace columnist James McEnaney argues that Scotland must deliver LGBT-inclusive education in all schools, not just some

EARLIER this month the Tie campaign published a new report – Attitudes Towards LGBT in Scottish Education – highlighting the ‘lived experience’ of young people and their teachers in an effort to further illustrate the need for a new approach to education in Scotland. To describe the findings as devastating would be an understatement (and a crass one at that).

Sixty-four per cent of LGBT respondents to the Tie survey reported being bullied because of their sexuality or gender identity and 72 per cent claimed that such behaviour was not challenged by school staff (a point corroborated by 73 per cent of heterosexual respondents).

Thirteen per cent of LGBT respondents had self-harmed once as a result of bullying while a further 45 per cent did so regularly.

Twenty-seven per cent of LGBT respondents reported at least one suicide attempt as a result of their treatment, with another 15 per cent having made multiple attempts.

And while the quantitative data is horrific, the personal experiences provided by LGBT young people are no better.

"I nearly came out at 15," said one, "but I had to decide between coming out and surviving another two years of school to do S5/S6 and go on to university."

Another discusses the official response to their suicide attempt: "When my mum spoke to my year head and guidance teacher about my suicide attempt we were told that maybe I should move to another school…"

The data from teacher respondents also makes for some deeply uncomfortable reading: 80 per cent felt that they had not been properly trained to deal with LGBT issues and bullying and, in a serious challenge to Education Secretary John Swinney, just six per cent felt that the government had done enough to tackle bullying based on sexuality and gender identity.

We're not doing anything like enough for LGBT young people, and the human cost of the status quo is simply intolerable.

Crucially, almost half of teachers had never heard of an official 'tool-kit' for "Dealing with Homophobia and Homophobic Bullying", with just seven per cent of teachers actually using it.

It all adds up to this unavoidable truth: we're not doing anything like enough for LGBT young people, and the human cost of the status quo is simply intolerable.

That's why it has been so heartening to see politicians seemingly lining up to back the Tie campaign. In a little over a year, co-founders Jordan Daly and Liam Stevenson have gathered support from across the political spectrum and the Holyrood chamber, with members of all parties throwing their weight behind calls for LGBT inclusive education in Scotland.

The question now is simple: are Scotland's politicians ready to turn their warm words into serious action?

Remember, the Tie campaign is not just seeking to highlight injustice; this isn't about generating a few headlines and then patting itself on the back for all the attention it brought to its cause. Tie includes specific recommendations to help make life better for LGBT young people, and it is the delivery of these changes by which our politicians should be judged.

Some of the demands, such as the mandatory recording of incidents of LGBT bullying, could and should be waved through with minimal – if any – real debate. The provision of free CPD for teachers is a no-brainer, as is the request for changes to be made to Initial Teacher Education programmes in Scotland.

That's why it has been so heartening to see politicians seemingly lining up to back the Tie campaign.

Others areas will be more complicated.

Tie is, for example, calling for LGBT issues to be included in Scottish curricular guidance. This is perfectly reasonable: we expect young people to learn about the civil rights campaign and the suffragettes but there are few, if any, Scottish schools teaching pupils about the Stonewall riots. That has to change, even if the means by which this is achieved causes a few headaches for Education Scotland and the SQA.

But the most controversial area in the Tie report is the call for “a legislative requirement for all schools to deliver upon any LGBT inclusive education programme which is established”. The key phrase there is “all schools”, with Tie rightly arguing that there must be no patchwork of provision in this area.

To be clear, this means that the same requirements should apply to faith schools as non-denominational institutions.

The question now is simple: are Scotland's politicians ready to turn their warm words into serious action?

This is where principles, commitment and resolve will be truly tested.

Put simply, politicians from all parties are clearly reluctant to start a process which they fear can only end in a very public conflict between religion and politics, with the Catholic Church on one side and the vast majority of parliament, backed by public opinion, on the other.

No sensible politician would relish such a fight but, as ever, it is the SNP that has the most to lose.

It’s worth remembering that not so long ago that the SNP, whose government would ultimately be charged with making Tie’s proposals a reality across Scotland, was seen as an anti-catholic party. A great deal of energy has been expended in an attempt to cleanse that particular stain and it is a testament to its success that catholics are now no less likely to vote SNP than any other group.

High-profile catholic columnist Kevin McKenna has even gone so far as to describe the SNP as a more natural home for Scotland’s catholics than the Labour Party (which he accuses of taking the catholic community for granted).

To be clear, this means that the same requirements should apply to faith schools as non-denominational institutions. This is where principles, commitment and resolve will be truly tested.

It doesn’t take too much of an intellectual stretch to understand why the SNP hierarchy may feel unable to fully accept the Tie recommendations for fear of poisoning its relationship with Scotland's catholic community. In purely political terms, its caution is understandable.

But this isn’t about politics and it’s not about religion: it’s about the rights of all children to feel safe and included while pursuing their education; it’s about recognising, as a society, that allowing vested interests to get in the way of change makes us complicit in the suffering of LGBT young people across our country.

There are those who believe that catholic education is fundamentally incompatible with LGBT inclusion (I am not one of them, despite my opposition to faith-based education) while others are convinced that catholic schools would, rightly or wrongly, demand some sort of opt-out from any new legislation to allow them to address the issue in their own way.

Indeed, a carefully-worded statement from the Scottish Catholic Education Service highlights an expectation that the government would hold conversations with all “stakeholders” to ensure that “that every school is able to satisfactorily meet the requirements” of any statutory changes in the coming months and years.

Of course, the government should discuss any changes with those involved in delivering educations, and the Scottish Catholic Education Service would fall into this category, but the ultimate position on this issue must be made absolutely clear: there can be no opt-outs, no exceptions, no children left behind.

The rights of young people to feel safe and included at school override the qualms of any religious organisation or the sensitivities of some parents. Any two-tier approach to LGBT equality, where some children are held hostage by the educational preferences of their parents, must be rejected.

All those politicians who claim to “fully support” Tie must be pressed on this specific issue. In the words of Alex Salmond, it is time to hold their feet to the fire.