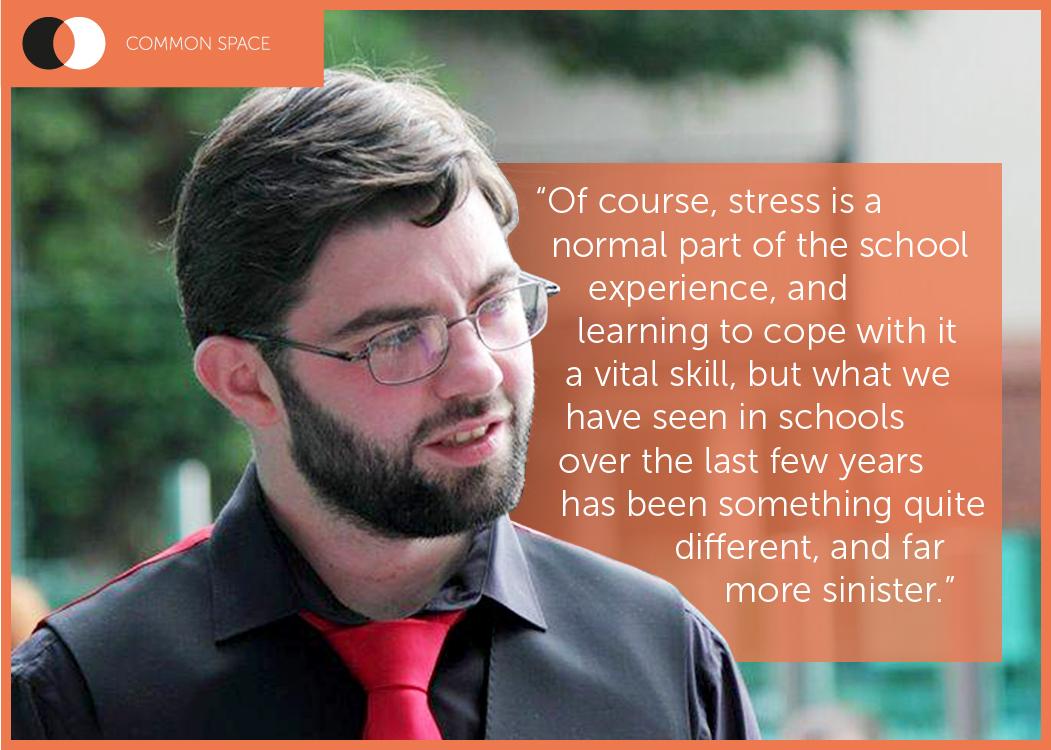 BETWEEN 2009 and 2014, the number of children admitted to hospital for self-harm doubled in some parts of Scotland. Yes you did read that correctly: doubled.

This is a genuinely frightening statistic, and sadly it doesn’t end there: Penumbra, a nationwide mental health charity, reported a 166 per cent increase in referrals over the same period, while the number of counselling sessions provided by Childline increased by a fifth in 2014 alone.

There’s no getting away from it – our children are under more stress than ever before, and are at very real risk because of it.

There’s no getting away from it – our children are under more stress than ever before, and are at very real risk because of it.

One of Scotland’s teaching unions, the Scottish Secondary Teachers Association, has now raised its head above the parapet and linked this increase , at least in part, to the quite incredible pressure being heaped on young people as a result of the New Qualifications. These concerns must not be dismissed.

Speak to any secondary teacher in Scotland and they will likely have stories of young people in tears, completely burned out as they desperately struggle to cope with the overwhelming volume of utterly pointless assessments now imposed upon them from on high. The evidence may be anecdotal, but it is also widespread.

Of course, stress is a normal part of the school experience, and learning to cope with it a vital skill, but what we have seen in schools over the last few years has been something quite different, and far more sinister.

As the SSTA points out, an average S4 student could be expected to sit up to 24 individual unit assessments, all of which must be passed in order to proceed to the final exam, between January and April. Resits – made more likely by changes to the assessment approach – could see that number rise significantly.

In some cases students are spending weeks at a time doing little more than being tested as their teachers do their best to meet the requirements of the New Qualifications. It is utterly relentless, and undoubtedly having a significant impact beyond the four walls of the classroom.

It has become perfectly clear that failings in both the design and the implementation of these New Qualifications have had serious detrimental effects not just on teaching staff (who are on the brink of industrial action) but also on pupils. Though the government has established yet another review group to deal with this problem there is no real expectation that it will be permitted to deliver any meaningful changes.

Stress is a normal part of the school experience, and learning to cope with it a vital skill, but what we have seen in schools over the last few years has been something quite different, and far more sinister.

Similar concerns have been raised about the potential impact of the government’s profoundly ill-judged plans for national standardised testing . Earlier this month Children in Scotland attacked the proposals on ‘ethical’ grounds, arguing – quite correctly – that this sort of testing is likely to have a detrimental effect on pupils’ wellbeing.

At one end of the scale we will see five-year-old children forced through unnecessary, stressful and entirely counter-productive testing; at the other, yet more teenagers will find themselves struggling to cope with the pressure of standardised tests which, regardless of rhetoric to the contrary, will become increasingly high-stakes over time. It is a recipe for disaster, and young people will be the ones paying the price.

The government may have been forced to back down on plans to publish the raw data from the new standardised tests, but they remain insistent – despite a flood of opposition – that these tests will be introduced. That being the case, a range of negative consequences for young people – admittedly unintended but certainly not unforeseen – are inevitable.

In both of these cases, government action has a direct bearing on the wellbeing of our children, but sometimes inaction is just as damaging: take, for example, the horrific experiences endured by so many LGBTI+ young people throughout their school years.

Figures released by the Time for Inclusive Education (TIE) campaign are simply terrifying : more than half of LGBTI+ children are regularly self-harming, and more than a quarter have attempted suicide as a result of homophobic bullying.

Many of the pressures faced by adolescents are complex and cultural, but too often they are a direct result of policy decisions made up the highest levels of our society.

These sorts of statistics should keep every single parliamentarian in this country awake at night, yet the Scottish Parliament – fearful of vested interests and political ramifications – recently closed a petition from Tie calling for workable, affordable and effective changes to areas such as teacher education.

And the young people affected? The ones taking razor blades to their own flesh? Their suffering will just have to continue.

Many of the pressures faced by adolescents are complex and cultural, but too often they are a direct result of policy decisions made up the highest levels of our society. In each of the areas detailed above, these decisions have a direct impact upon the mental and physical wellbeing of young people all over this country, yet the needs of politicians, their parties, and adults more generally, continue to be prioritised.

Ultimately, our society is guilty of a lack of genuine concern for the rights of our children, instead treating them as pawns in ideological and political proxy wars. Scotland’s young people deserve so much better, and we can – we must – do better.

The alternative is simply unthinkable.