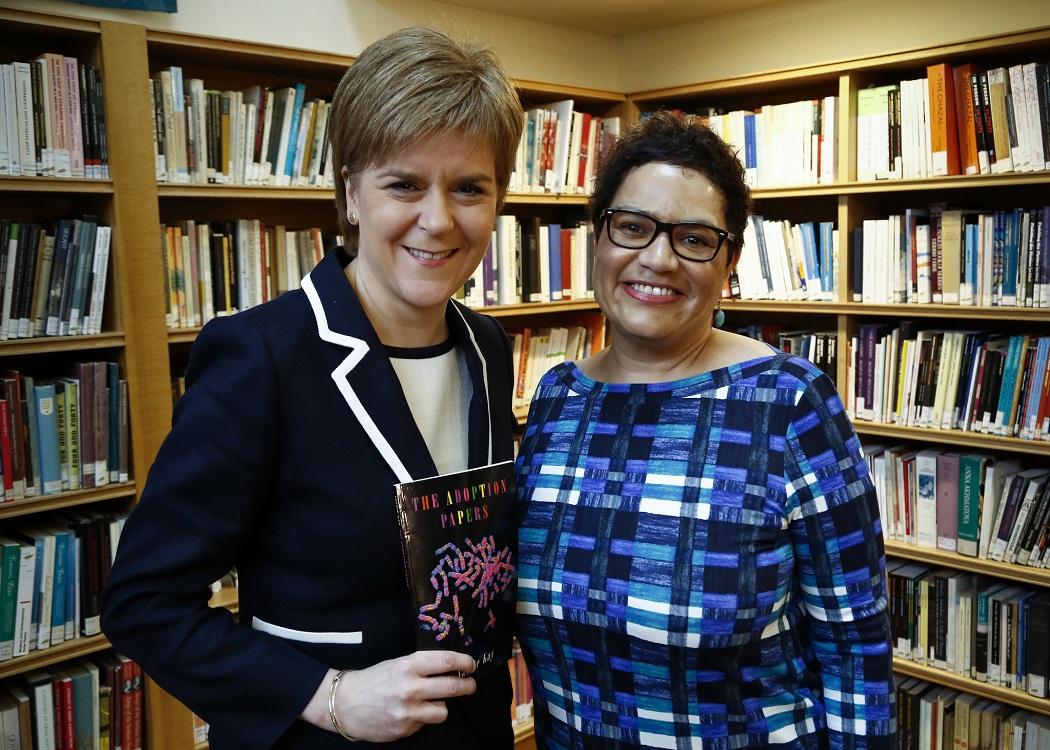 EARLIER this year Liz Lochhead’s time as Makar – the national poet for Scotland – came to an end. Having succeeded the great Edwin Morgan, Lochhead spent five years as, in the words of Kevin Williamson, “a formidable and enthusiastic champion of poetry”.

As Lochhead stepped down speculation about her replacement inevitably began to grow, with candidates such as Don Paterson, Tom Leonard and Kathleen Jamie discussed. Ultimately, however, it was up to Nicola Sturgeon – with assistance from her predecessors as first minister – to decide who would fill Lochhead’s considerable (metaphorical) shoes.

Last week, amid the bookshelves of the National Poetry Library, she announced her choice: Scotland’s new Makar is Jackie Kay.

I love Kay’s poetry and, although I find the secrecy and potential for politicisation in the selection process to be pretty indefensible, think she is a brilliant choice.

I love Kay’s poetry and, although I find the secrecy and potential for politicisation in the selection process to be pretty indefensible, think she is a brilliant choice.

One of the most important aspects of the Makar’s role is to engage the public and there is absolutely no question that Kay fits the bill in this regard – she is a quite extraordinary speaker whose warmth and honesty is infectious. I can’t imagine anyone being in a room with her and not leaving with a smile on their face.

A few years ago Kay visited the Isle of Arran to speak as part of the annual poetry festival. At the time I was teaching English in the island’s high school and convinced two of my three advanced higher students to come along to hear her. They were not disappointed.

Having spoken to the audience and read some of her work, Kay offered to sign any books that the audience had brought with them. As a rule I don’t go in for that sort of thing (I’d only lose it anyway) but I had been so impressed that I decided to make an exception.

As I stood up to join the queue I realised that I had not brought any of Kay’s books with me, nor did I have any cash with which to purchase one – the only thing I had available was a now entirely empty wine bottle. Undeterred – and encouraged by my ever-so-slight inebriation – I asked her to sign that instead.

I still have it.

My clearest memory from that night is the reading of Fiere, an utterly beautiful poem about the power of enduring friendship. Every line, every single syllable, seemed to swell with emotion as Kay’s distinctive voice filled the room. To this day, whenever I read it, the voice in my head is hers.

But my favourite Jackie Kay poem is, without doubt, My Grandmother’s Houses , a wonderfully personal exploration of the poet’s early childhood and her relationship with her grandmother.

The poem details the three different houses which Kay associates with her grandmother: the second floor tenement flat which overlooked the cemetery, with a bedroom full of ‘newspaper parcels’ containing “every present / she’s ever got since the War”; the 24th floor high rise into which she was, reluctantly, moved, with””running water in her own bathroom,/ the wall-to-wall foam-backed carpet,/ the parcels locked in her air-raid shelter”; and the grand house where “Rooms lead off like an octopus’s arms” and which, at the age of 70, Kay’s grandmother continued to clean “for ten bob”.

My favourite Jackie Kay poem is, without doubt, My Grandmother’s Houses , a wonderfully personal exploration of the poet’s early childhood and her relationship with her grandmother.

Throughout the poem strands of narration, recollection and reflection all flow together, just as they do in our minds. It’s the sort of poem that wraps itself around you and refuses to let go.

Technically it is an excellent piece of poetry but, for me, the most important thing about work like this is that we can share in the emotions it explores. That is certainly the case for me with My Grandmother’s Houses.

My grandmother didn’t take me to church, nor do I have memories of her “rushing me down the High Street / till we get to her cleaning house”, yet something between the lines, something ethereal, still leaves me holding back tears – both happy and sad – as my own gran, who died many years ago, materialises in front of me. It happens every single time.

My gran also lived on the 24th floor of a high rise, and reading this poem brings memories of that place rushing back: the pattern on the lift door; the view from the living room window, with Glasgow stretching into the distance before finally meeting faint hills; the light fitting swinging from side to side as the building shifted in the wind.

And then there was her ‘other’ house – the ground floor flat in Kirkintilloch with the rose bushes at the front, the drying green out the back and the sliding plastic divider between the hall and the ‘kitchenette’.

For many years my sister and I would go there in the morning before school and my gran would walk us down to the bus stop at the bottom of the road. As a young boy I would often stay on a Saturday night, and I still remember waking up one Sunday morning to be told that “the princess” had died.

If memories are how we keep alive those we have lost then Kay’s poem has made my gran immortal. This is what Kay’s work can do. Everything about it feels so real, so human, so us.

If memories are how we keep alive those we have lost then Kay’s poem has made my gran immortal.

This is what Kay’s work can do. Everything about it feels so real, so human, so us. It is gorgeously vibrant and unashamedly emotional. It also sits wonderfully within a feature of the Scottish poetic tradition to which I have always been drawn – the power of plain speaking. Read the work of MacCaig or Morgan and, though the ideas may be complex, the language is noticeably open and accessible.

Like those literary giants, Kay’s work is not about trying to prove that she is smarter than her readers, nor does it exist to provide a platform for a perverse linguistic narcissism; instead, her poetry seems to stand before us with open arms, welcoming us and asking us to make it our own.

She’s the perfect Makar and the people of Scotland are lucky to have her.