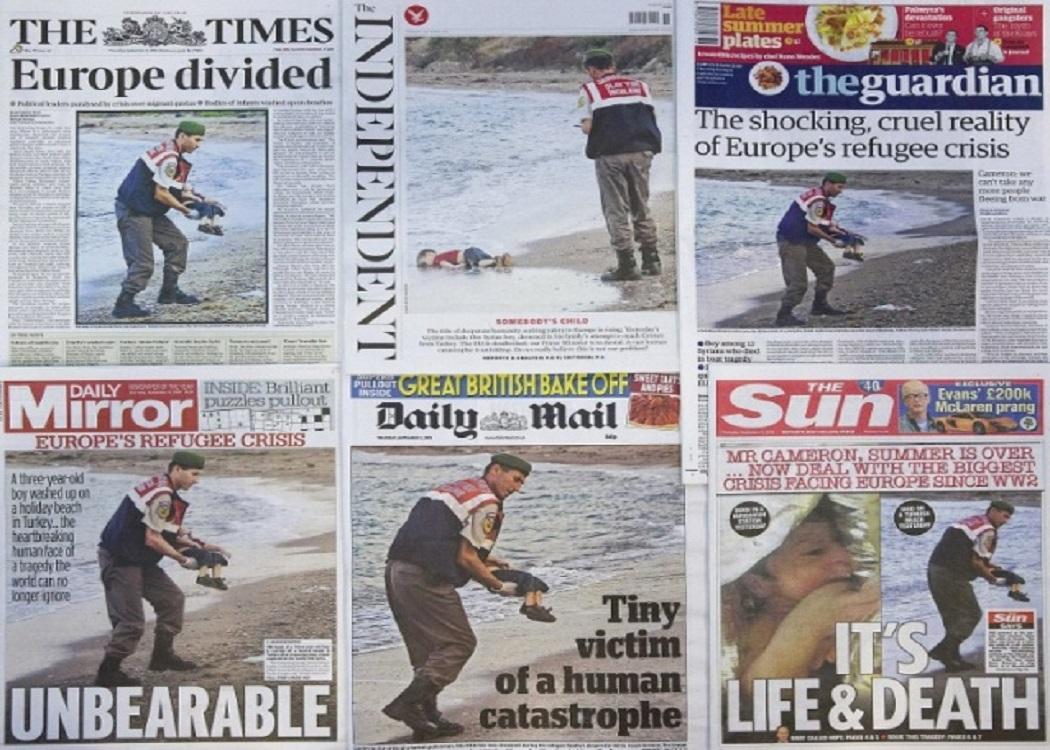 ON the 4th of May 2014 my son – Ciaran Harris McEnaney – was born in Glasgow’s Southern General Hospital.

The latter stages of my wife’s pregnancy had been difficult, as was the birth itself, but he was finally here. When I held him for the first time – hands shaking, chest tightening – I remember feeling that the world had gotten just a little bit better in the instant of his arrival.

That initial elation didn’t last. Ciaran was obviously jaundiced and it soon became clear that he was struggling to maintain his body temperature; eventually, he was taken to intensive care.

Aylan Kurdi was a little older than my child, his clothes a little bigger, his skin and hair a little darker, but in every way that really matters this boy was no different from the son who means the world to me.

I will never, for the rest of my life, forget how it felt to sit in that room, the index finger of my right hand pressed into his tiny palm, eyes fixed on his yellow-tinged body, literally begging – first aloud and then, when the words just wouldn’t come, silently – for him to stay warm, pull through and come home.
He did, but in those moments – when single seconds seemed to stretch out into eternity – I think I would have done anything to save him.

Ciaran is now 16 months old and is a happy, healthy child growing up in one of the most affluent areas of an incredibly rich and stable country, but the fear I felt in those early days has stayed with me ever since.

When I returned home from work today he was in the garden. He now recognises the sound of my motorbike and ran up to the gate as I approached. He stood there, smiling and waving until I pulled off my helmet and reciprocated.

This usually happens immediately, but not today – today, after all that I had seen, I had to take an extra few moments to compose myself.

Ciaran is upstairs now, asleep and mercifully unaware, the sound of his breathing drifting out from the baby monitor. I am sitting with my laptop on my knee, trying desperately – and futilely – to displace from my mind the image which has tormented me all day: the body of a little boy washed up on a European beach.

Aylan Kurdi was a little older than my child, his clothes a little bigger, his skin and hair a little darker, but in every way that really matters this boy was no different from the son who means the world to me.

Every time I see that photograph of Aylan I cannot help but think of Ciaran, and every time it makes me cry.

Aylan’s photograph may well be the catalyst which changes Europe’s attitude to the refugees screaming on our doorstep, but how can that possibly even begin to compensate a father whose family – whose world – is gone?

In my teaching I spend a lot of time impressing upon students the importance of thinking about their intended purpose and audience – why are you writing, and who are you writing for?

Right now I don’t have an answer for either question. I don’t know who this is for or what it’s supposed to achieve, only that these words demanded to be written.

I do know that in London right now David Cameron has finally been forced – forced – to accept that Britain must offer a safe haven to more of the refugees so desperate to reach Europe that they are willing to risk everything.

I know that discussions will be taking place where the political concerns of our government are weighed against the value of thousands upon thousands of human lives.

I also know that two-and-a-half thousand miles away Abdullah Kurdi is forced to confront something which I can barely comprehend: the loss of his wife and children.

Aylan’s photograph may well be the catalyst which changes Europe’s attitude to the refugees screaming on our doorstep, but how can that possibly even begin to compensate a father whose family – whose world – is gone?

Even now I cannot find the words to properly express the way in which Abdullah Kurdi’s experiences make me feel, but I keep thinking about Ciaran, safe and secure a few metres above me.

I ask myself what I would be willing to do to keep him safe, where we would go if Scotland descended into the sort of hell engulfing countries like Syria.

I find myself trying to imagine how it would feel to take my infant son out onto a dangerous sea – one which has already claimed thousands of lives – simply because the land from which we have come is more dangerous than the journey across the water.

I struggle to understand how a prime minister can claim to have ‘done enough’ for refugees and then bear to look at his own reflection.

I struggle to understand how a continent whose collective identity was forged in the fire of almost unfathomable suffering could have failed so many for so long.

I struggle to understand how any human heart can be so hardened by hatred that it becomes possible to be indifferent to the suffering of millions.

I struggle to understand how a prime minister can claim to have ‘done enough’ for refugees and then bear to look at his own reflection.

But there is something I absolutely can understand, and that is the words of Abdullah Kurdi, whose dreams of a better life in Europe have been ripped apart: “I just want to see my children for the last time and stay forever with them.”