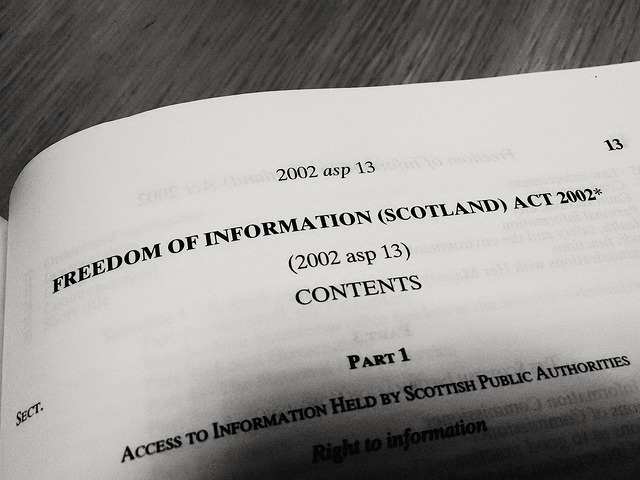 FOI WAS introduced in Scotland in 2002, 36 years after the USA and 236 years after Sweden, which established what are regarded as the first FOI laws in 1776.

To date, over 100 countries have introduced some form of FoI legislation and although the details vary from country to country, the principle purpose remains the same: to ensure that the public has access to vital information about what governments and other official bodies are doing in their name and with their money. Put simply, FoI is supposed to keep those in power honest.

The system is used by a huge range of organisations and individuals, but it is the work of journalists that has arguably highlighted just how valuable these information rights are.

Put simply, FoI is supposed to keep those in power honest.

In Scotland, recent stories derived from journalists’ FoI investigations include the pollution of Scottish lochs from chemicals used in fish-farming and the deaths of four homeless people per month in Glasgow.

In 2015 I used FoI requests to reveal that the written advice behind the Scottish Government’s plans for standardised testing in schools amounts to just four unsolicited emails, and that a series of meetings that informed the policy had been entirely unminuted.

It is also thanks to FoI that we learned about the litany of assault allegations facing the police force involved in the death of Sheku Bayoh, and at a UK level the MPs expenses scandal would likely never have come to light without FoI requests. In America, David Barstow used FoI disclosures to reveal how the US government manipulated media coverage of the so-called war on terror.

So make no mistake: FoI isn’t just some technical mechanism that is of value only to policy geeks and investigative journalists, nor is it simply stick with which opposition politicians can beat the government of the day. It is, in fact, a fundamental right and a vital part of a properly functioning, modern democracy.

That’s why ongoing concerns about the Scottish Government’s attitude and approach to FoI are so serious. Earlier this month 23 journalists – the in-house writers at CommonSpace and myself included – from across a range of titles, backgrounds and editorial lines signed an open letter highlighting this issue. The letter was published jointly by CommonSpace and The Ferret and outlines a range of ways in which the Scottish Government has undermined FoI, such as gaming the system with delayed responses, withholding information for tenuous reasons and failing to keep records which should be available to the public.

FoI is a fundamental right and a vital part of a properly functioning, modern democracy.

Parliament has now debated the matter twice. On 13 June, Labour MSP Neil Findlay led a members debate backing the journalists’ concerns. On that occasion not a single SNP MSP was willing to take part in the debate itself, leaving Minister for Parliamentary Business Joe Fitzpatrick looking high and dry as he attempted, without success, to defend his government’s record.

Last week, Conservative MSP Edward Mountain moved another FoI-related motion stating that “the parliament condemns the Scottish Government’s poor performance in responding to freedom of information requests; calls for an independent inquiry into the way that it deals with these, and agrees to undertake post-legislative scrutiny of the Freedom of Information (Scotland) Act 2002.”

The debate was a bruising affair for the government, whose attempts to shift the focus to Westminster failed. In the end the motion – which, following an amendment from Fitzpatrick, included a reference to plans to publish FoI responses online – was passed unanimously, meaning that SNP MSPs voted to call for an inquiry in to their own government’s conduct.

SNP MSPs voted to call for an inquiry in to their own government’s conduct.

The need for that inquiry was reinforced when it was revealed that the government’s internal staff guidelines ensure that “sensitive” FoI requests, such as those from journalists, are screened for political damage by special advisers. Fitzpatrick had previously insisted that this process was simply to ensure “accuracy” – if you believe that you’ll believe pretty much anything.

It is for these reasons, and more besides, that a fully independent inquiry into the government’s handling of FoI is so important. Although it looks as though the SNP may try to desperately wriggle out of it by claiming that the existence and scope of the Scottish Information Commissioner is sufficient, it is vital that it does not succeed – MSPs voted for an inquiry and, if public confidence in the government’s commitment to transparency is to be restored, that is what must be delivered.

The SNP is keen on calling for others to respect the will of the Scottish Parliament – now the time has come for it to back that talk with action. Nothing else will do.