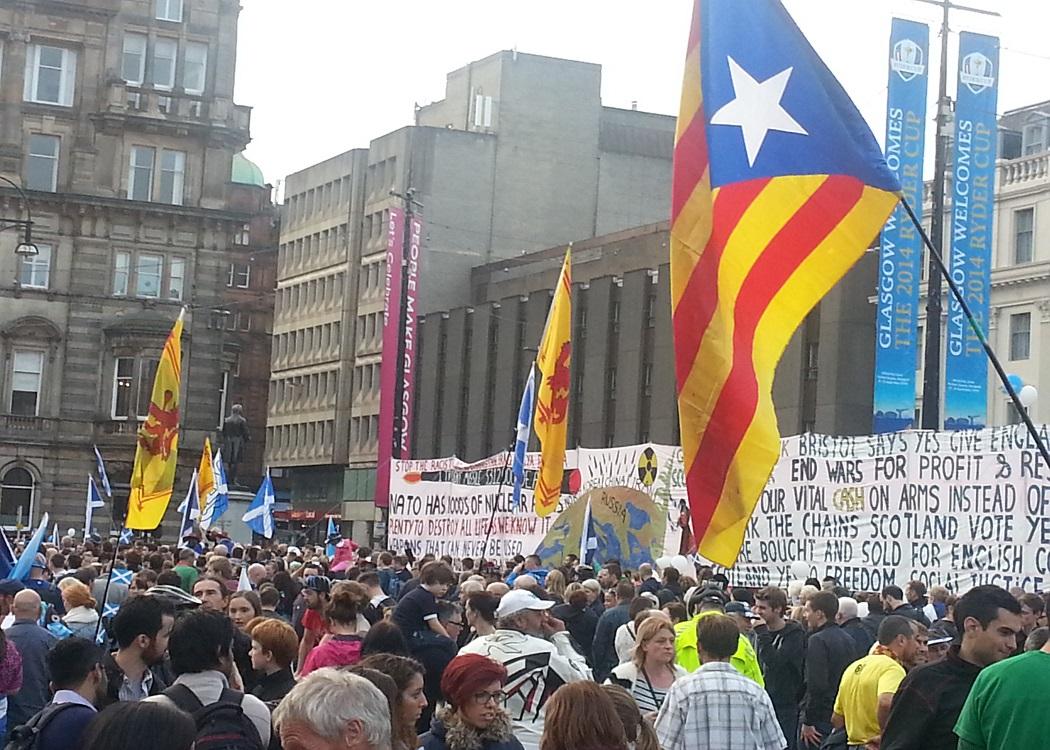 CommonSpace columnist James McEnaney says the vision for Scottish independence must come from the people, not the SNP

TIME may fly when you’re having fun, but it seems to simply dissolve under the circumstances experienced by the people of Scotland in the last 12 months – though it seems scarcely believable, next week will mark the one-year anniversary of the 2014 referendum on Scottish independence.

Understandably the thoughts of many Scots are turning to those incredible months, weeks and days when independence came tantalisingly, devastatingly close for those campaigning for a Yes vote.

Of course, we should remember the successes: the incredible vibrancy of the campaign; the panic we created in the heart of the British establishment, the stunning turnout, the massive increase in support for a Yes vote and, ultimately, the prevailing sense that independence might just be a question of when and not if.

Reflection is only worthwhile if it is honest; it is important that we are able to look back on the Yes campaign with a critical eye.

But reflection is only worthwhile if it is honest; it is important that we are able to look back on the Yes campaign with a critical eye and recognise the failings which meant that, in the end, we fell short.

Speaking to CommonSpace , Jim Sillars – former Labour and SNP MP and a prominent voice during the referendum campaign – has argued that one significant “weakness” of the Yes campaign was that it became “far too tied to the SNP government, never mind the SNP as a party”.

Of course, caution should always be exercised when considering the opinions of someone with a book to sell but, in this case, he is absolutely correct.

In his interview, Sillars explains his position with specific reference to the Scottish Government’s White Paper, a document which he accurately describes as “a duality between information and propaganda for the SNP”.

While the detail of the White Paper may well have left many options open (a point made by a government spokesperson in response to Sillars’ claims) its symbolic impact is – and always was – of far more relevance than the specific text it it contained.

The White Paper was “a mistake” because for too many it left independence inextricably bound to the Scottish National Party and the current government in Holyrood.

This perceived connection certainly predated the publication of the White Paper, but that vision of Scotland’s Future reinforced and entrenched tribal divisions for some voters and robbed the Yes campaign of potential support.

The White Paper was “a mistake” because for too many it left independence inextricably bound to the SNP and the current government in Holyrood.

The fact that pro-independence activists had to continually stress that a vote for Yes was not a vote for the SNP was in itself evidence that the problem existed.

Those activists were, of course, correct but nonetheless by the time September 18th came around the type of independent Scotland apparently on offer – complete with currency union, Nato membership and the Queen as unelected head of state – was very much modelled on the SNP blueprint.

A Yes vote may not have been a vote for the SNP or Alex Salmond, but it certainly did come to feel like a vote for an SNP vision of an independent Scotland.

However, the independence campaign did not fail because of the publication of a single document – no matter how ill-advised that publication was – but it absolutely did damage attempts to convince voters that the question of independence was distinct and divided from the SNP (an argument that the strength of groups like the Radical Independence Campaign and National Collective and the prominence of the Greens should have meant that we were able to win).

But there was another, perhaps even greater, mistake inherent in the publication of the White Paper. The document was an attempt to offer certainty to the public, with clear and dependable information which could address that common complaint of the undecided voter: I don’t know enough.

Such a document, it was surely felt, could offer a detailed blueprint for an independent Scotland and allay some of the concerns of those yet to come to a decision, hopefully encouraging them to back independence.

In a tactical sense such an approach is certainly rational – that voters fear uncertainty is not a controversial position – but in reality it was also dishonest.

The fundamental problem with the White Paper (and the campaigning approach that it represented) is that absolute guarantees could never be offered in advance of independence, yet the existence of that specific document seemed to claim that they could.

A Yes vote may not have been a vote for the SNP or Alex Salmond, but it certainly did come to feel like a vote for an SNP vision of an independent Scotland.

False promises of certainty – brutally highlighted by Alistair Darling in the first TV debate – became a serious problem for the Yes campaign (a fact that even Alex Salmond tacitly acknowledge when he finally outlined currency ‘plan B, C and D’ in the second TV debate) and this error must not be repeated.

Independence did not, does not and can not guarantee progress and prosperity for the people of Scotland; throwing off the shackles of the Act of Union and ‘unchaining the unicorn’ will not, through some glorious socio-political alchemy, cure all that ails us as a nation.

Independence offers only the chance the build a better country. Another Scotland is surely possible, but it is far from guaranteed.

The unanswered questions of independence should have been a virtue, the open spaces they left in our future an opportunity, but with the SNP dominating an increasingly conservative campaign – one aimed at convincing people that little would really change if they voted Yes – the inability to give cast-iron guarantees became a millstone around the neck of Scottish independence.

So Jim Sillars is absolutely correct when he says that the Yes campaign was too closely tied to the SNP in the lead up to the last referendum; of far greater concern, however, is that there are many who seem to believe that we should deliberately repeat this mistake in the blinkered, baseless assumption that it would offer a different outcome the second time around.

The response to the recent launch of Rise was particularly instructive, with perhaps the most common critique from the Yes side of Scotland’s new political spectrum being that votes for parties other than the SNP would risk ‘splitting the pro-indy vote’ .

To such people electoral plurality should be put on the back burner until after independence, with all Yes supporters lining up behind the SNP machine and waiting for it to deliver an independent Scotland. We should ‘trust Nicola’. We should ‘stick to the plan’.

Independence is not something to be delivered for the people of Scotland, it must be won by them – only then will we be able to to build an independent Scotland worth voting for.

Such people are wrong. SNP dominance hurt the campaign for independence last time and it cannot be allowed to do so again.

The SNP provides the independence movement with an electoral vehicle strong enough to help secure the parliamentary mandate needed for a future referendum, but one party alone will never be able to secure independence itself.

Independence is not something to be delivered for the people of Scotland, it must be won by them – only then will we be able to to build an independent Scotland worth voting for.

The nationalists have a huge role to play in the ongoing campaign for independence, but we must learn from the mistakes of the past, not repeat them.