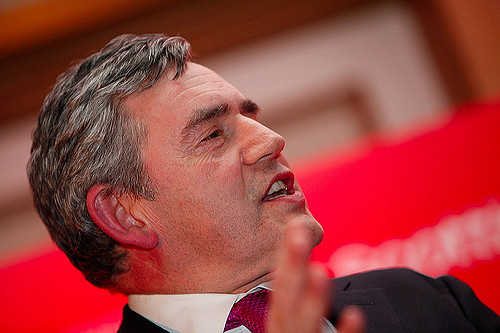 YOU might have missed it – Jeremy Corbyn certainly did. In between saying there is “no difference” between racists and supporters of independence and reminding everyone that flags are inedible, it was announced during the Scottish Labour conference that, once again, Gordon Brown is to be rolled out – this time to participate in another discussion on federalism.

We’ve all seen the pre-2014 referendum interview in which the former prime minister described the post-No offering: “It’s like Home Rule in the United Kingdom … near to federalism in a country where 85 per cent of the population is in one nation,” declared Brown.

Fast forward two and a half years and we’ve since had the Smith Commission, a new Scotland Act, the EU referendum and the Scottish Government’s ‘Scotland’s Place in Europe’ proposals. The opportunities for a federal UK have been exhausted, albeit in other guises.

Read more – Ian Murray: Scottish Labour is ready to take up the mantle of federalism

Nevertheless, the latest federalist rebrand is under the banner of a People’s Constitutional Convention. Current Scottish Labour leader, Kezia Dugdale, is organising a summit where Brown and other representatives from the UK party will discuss what other carrot can be dangled in front of swaying voters during the inevitable second independence referendum.

During the BBC’s Sunday Politics programme, Andrew Neil described federalism as a “fantasy” and asked Dugdale to provide evidence that appetite for such constitutional change exists south of the border. Obviously, none was provided.

In fact, we can look back at the dismal failure that was the North East England devolution referendum of 2004. In, arguably, Labour’s strongest region in England, every council area rejected the proposal. Full government backing and £11m could only generate a measly 22 per cent in favour. The result was so bad that the then Labour government abandoned similar referenda in other regions of England.

Of course, opinions can change and the result of a vote that took place over 10 years ago doesn’t mean that the desire for greater autonomy in England hasn’t shifted. The reality of the situation is, however, that with the reinvigoration of English nationalism, such proposals would likely get even less of a hearing now.

Fundamentally, the gift of pursuing such constitutional change shouldn’t rest with one party, especially one that’s not really winning many popularity contests.

Street parties. Bunting. A democratic celebration. It’ll be marvelous. The Summer of Federalism will end as parliament returns from its summer recess. Gordon Brown will present a neat document with a colourful front cover at the campaign’s final press conference. Rapturous applause.

If I think back to all the post #indyref autopsies I’ve attended since 2014 there has been at least one common theme: next time we must offer as much certainty as possible. Yes, there’s an element of risk but let’s not offer up unnecessary variables.

The currency debate is a useful example to help illustrate this point. Whereas in 2014, we had options A, B and C, nearly every activist I know supports limiting uncertainty by advocating a Scottish Pound. The Yes side controls the narrative.

The evergreen promise of further devolution is another example. In 2014, The Vow was the last minute pledge deployed by unionist politicians on the front of a tabloid newspaper, hoping that a promise of extra powers would seal the deal. Dugdale’s Constitutional Convention is just this.

If we want to reduce the number of variables, if we want to leave unionists empty handed, then we should make the effort to expose federalism in the UK for the unworkable sham that it is. In doing so, I propose we embark on a Summer of Federalism.

Brexit has exposed Scotland’s democratic deficit like nothing before. In a UK plebiscite context, England is the only show in town and for that reason we needn’t waste time in Scotland, Wales or Northern Ireland. Instead, I suggest that a multi-national cross party group of high heid yins campaigns across England only. Polls can be used to measure a change in attitudes. They’re reliable and trusted, of course.

Given that we are in an EU membership version of no-man’s-land, the onus is on the Better Together parties to prove federalism is deliverable under the current Tory government – and to do so quickly. The caveat of a Labour government is unacceptable. They’re all keen to avoid a second independence referendum after all.

Incidentally, in this reality La La Land keeps the Oscar for best picture.

At the weekend, Dugdale was keen to point out the People’s Constitutional Convention already has the backing of the UK Labour party and I’m assured that federalism has always had the support of the Liberals. Therefore their campaigns can start immediately.

Parliaments across the UK will be in recess, progress on Brexit will be slow due to the number of European elections and the BBC, Sky News and ITV will televise debates. Political commentators will be frothing at the mouths to fill their columns in the Times and the Herald.

Political heavyweights such as Arlene Foster, Tim Farron, Gordon Brown, Alex Salmond, Shami Chakrabarti and Leanne Wood will take the federalist message to the town halls of Hartlepool, Swindon, Chelmsford and Blackpool. Union of equals and a’ that.

The Summer of Federalism will end as parliament returns from its summer recess. Gordon Brown will present a neat document with a colourful front cover at the campaign’s final press conference. Rapturous applause.

Incidentally, in this reality La La Land keeps the Oscar for best picture.

Although I poke fun at the idea of federalism in a country where 85 per cent of the population lives in the nation that shows near zero interest in it, there might just be some merit in indulging the debate in order to expose its hollowness once and for all. Once the Summer of Federalism is out the way, we can get back to the real debate.