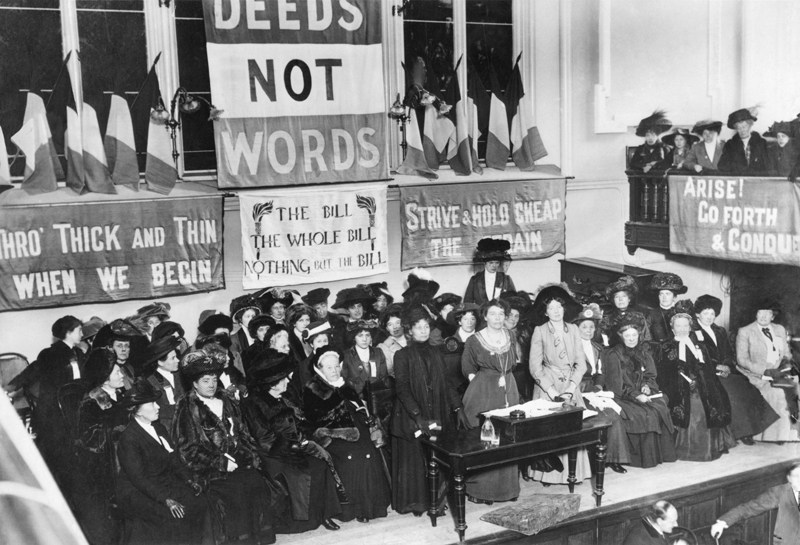 POLITICIANS such as Ruth Davidson and Jeremy Corbyn have joined calls for the convictions of women who campaigned for equal voting rights to be pardoned, 100 years after women over 30 and working-class men secured the right to vote.

The Representation of the People Act 1918 extended the right to vote to practically all men and gave women over 30 the right to vote in elections for the first time ever. The 100 year anniversary is being marked across the UK.

Writing for the Daily Telegraph, Scottish Tory leader Ruth Davidson supported the calls for suffragettes to receive a pardon: “Voting was a value judgment, not an intrinsic right.

“That inequality is one of the reasons why I support calls by family members to offer a posthumous pardon to those suffragettes charged with righting that wrong.”

“That inequality is one of the reasons why I support calls to offer a posthumous pardon to those suffragettes charged with righting that wrong.” Scottish Tory leader Ruth Davidson

The UK suffragette movement was formed around the Women’s Social and Political Union which campaigned for the political and economic emancipation of women.

Suffragette campaigners employed various methods of social disruption to raise awareness of their cause and force change from resistant male politicians, as a result of their activities it is estimated more 1,300 women were imprisoned whilst campaigning for the vote.

UK Labour leader Jeremy Corbyn, who signed an Early Day Motion calling for the pardon in 2004 alongside Diane Abbott MP, said on Tuesday morning that a future Labour government would issue the suffragettes an apology and pardon for the “miscarriage of justice” they faced.

Speaking at a special meeting of the shadow cabinet at the Museum of London’s suffragette exhibition, Corbyn said: “As a country, we must recognise and honour the enormous contribution and sacrifice made by women who campaigned for the right to vote.

“Many of those women were treated appallingly by society and the state. Convictions of suffragettes were politically motivated and bore no relation to the acts committed. Some were severely mistreated and force-fed in prison post-conviction so a pardon could mean something to their families.

“Labour in government will both pardon the suffragettes and give an official apology for the miscarriages of justice and wider persecution they suffered.”

“Labour in government will both pardon the suffragettes and give an official apology for the miscarriages of justice and wider persecution they suffered.” Jeremy Corbyn

First Minister Nicola Sturgeon will lead a debate in Holyrood on Tuesday afternoon which will mark the 100 year anniversary, paying tribute to the personal sacrifice made by suffragettes.

Home secretary Amber Rudd, who has the powers to issue a pardon, promised to “take a look” at the calls, telling ITV’s Good Morning Britain programme: “I can see where that campaign is coming from so I will take a look and see if there is a proposal that I can take more seriously.

“In terms of pardoning for arson, that is a little trickier.”

Whilst politics still deals with the fallout of the #MeToo campaign, it is likely the anniversary will to spark debate about women’s rights in 2018.