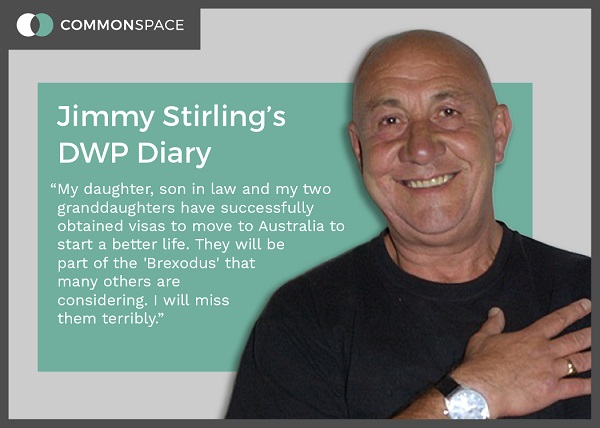 Today was a regular signing day. My work coach informed me that I will be getting a new work coach as he is leaving the Jobcentre to work at another one specialising in Universal Credit, only a six-minute drive from his home.

I will have to do a 45 minute walk to get to my new Jobcentre when mine closes. All right for some.

My youngest granddaughter started primary school, she is on the journey now, may her future be better than some of us had. Her’s will be much better, plans are afoot.

I saw my new work coach today. New work coach, new attitude and new ways of trying to “help” me into work. He asked why I was not getting work or interviews. “Age!” I told him.

He said that businesses are not supposed to discriminate because of age. I suggested they do. It is the reality of this day and age.

A day or so after this, there was an article in a paper and on BBC Radio Scotland regarding older people who are out of work. It highlighted the way I feel often. One part stated that “older people who are not working represent a high-risk group and, while re-employment may not always be possible, interventions that decrease loneliness, social isolation and boredom and improve self-esteem offer valuable opportunities to improve health outcomes and promote successful ageing.”

You can read more about it here.

My work coach then said that I could possibly start up my own business, maybe photography. I informed him that I did not drive and had no car, which would limit me to where I could travel. He said that there is a thing called The New Enterprise Allowance where the Jobcentre would pay £65 a week for 13 weeks then £33 for the remaining 13 weeks.

He said that businesses are not supposed to discriminate because of age. I suggested they do. It is the reality of this day and age.

He did say that if I pay rent, it may not work out better for me. This is part of a scheme under something called People Plus. Having been devoid of a social or job hunting network, I have no contacts. I tried starting my own business in the past, circumstances put an end to it and I just don’t have the will and a ruthless streak to make it a success. If I did, I would have put it all into practice.

People Plus is part of an organisation called Staffline Group PLC. Its website states: “PeoplePlus is a leading employment support, training services and justice company, helping people across the globe to transform their lives and businesses through employment, training, education and financial advice.

“We have been delivering key front-line public services for more than 30 years and incorporate A4e and Avanta, which merged in July 2015 to provide a greater choice of career opportunities for jobseekers, learners and employees and a highly effective approach to reducing unemployment in Britain.”

I said that I would consider it. I didn’t want to say that I didn’t really fancy it as I know people who lasted only a few days in the job because there was too much pressure on them. I also could not really refuse as it may have seemed that I was not trying to look for work.

A day or so after this, there was an article in a paper and on BBC Radio Scotland regarding older people who are out of work. It highlighted the way I feel often.

So, I will see what this call centre guru has to say. It seems that although I apply for more jobs per week than is expected, it is still not good enough. In the last 12 months I have applied for 660 jobs and had two interviews. This, again, is the reality of life today.

He also mentioned Remploy. He seemed to think that I had some sort of mental health problem because I had suffered from Post Traumatic Stress Disorder in the past and Remploy could help me.

I told him that this had happened years ago and I was considered to be fit for work in 2008. Obviously, some part of my DWP record has not been updated. He then told me that he would be away at my next signing on date and that I would be attended to by someone else and that he would see me in a month’s time.

On a lighter note, my much-shrunken garden has produced some veggies earlier than normal and the big soup pot has been utilised.

Something I had been bottling up for two years came to a head. My daughter, son in law and my two granddaughters have successfully obtained visas to move to Australia to start a better life. They will be part of the ‘Brexodus’ that many others are considering.

The results of recent referendums and general elections have helped to fuel their decision to leave Scotland and try a new life. They also don’t want to be working into their late 60s or early 70s if the present Tory government keeps upping the retirement age.

They don’t see a future here for themselves or their children. My daughter is a radiographer in the NHS and my son in law is a school teacher in Glasgow. They have jobs in the pipeline in Australia and are planning to move there very soon.

I will miss them terribly and especially my two granddaughters who will grow up on the other side of the world. I have had a week or two of emotional turmoil but I’m coming to terms with it all.

They don’t see a future here for themselves or their children. They have jobs in the pipeline in Australia and are planning to move there very soon.

I know we can keep in touch via modern technology and will have to embrace video communication even more. There will be a void which I will have to fill in
some other way and being unemployed and on a pittance, doesn’t help.

I will have to wait until I hit my retiral age before I can even consider a visit to Australia. That’s two years at least before I can see my family in the flesh. It hurts but I have to accept it.

They have their lives to live and I am certain that they will make a great future for themselves and their kids. They had visited Australia before to see friends there, before the girls were born, so they have a good idea of what life is like there and what Australia can offer, so they are not going there blind.

It’s a sare fecht for me at the moment which time will heal.