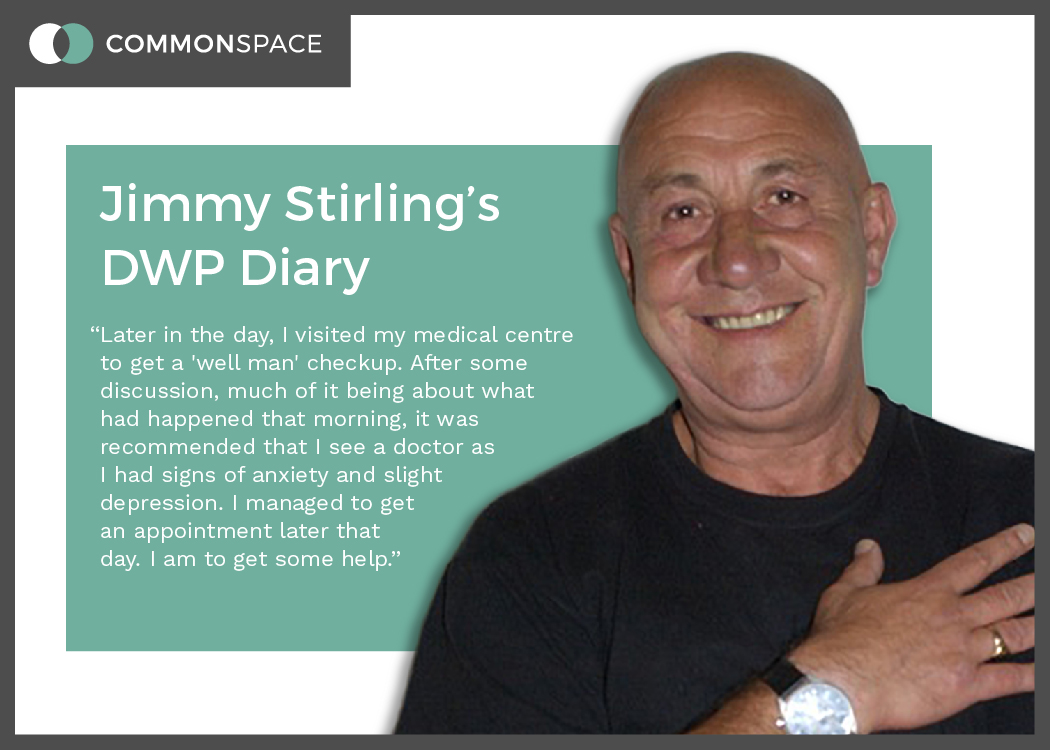 I receive Jobseeker's Allowance of PS50 per week and have a very small pension payment of just under PS25 per week. I do voluntary work for my neighbouring community and look after one of my granddaughters for two days per week.

I was recently conscripted to take part in the UK Government's Community Work Programme, where I would be forced to work for my Jobseeker's Allowance, which I see as slave labour.

I went again to the jobcentre at 9.20am, as was booked the previous day. I was given two forms to fill out. The first one was a sort of declaration to show that I did not work on a full time nor part time basis. I stated that I did voluntary work through my choice to help others.

The second form was the volunteers form which I've filled out twice already since February. I asked again why it was showing up on the system that I was supposed to be working, he couldn’t say. By filling out these forms it should stop the question being asked. Apparently, there was a note on the system that my claim was to be 'suspended'.

Then the man who was attending to me, not my work coach, starts noising me up, playing the 'bad cop'. While filling out the form he kept asking me questions:

"Do you have your bus ticket?"

"Have you signed up for jobs from the civil service?"

He even noised me up telling me that I could not retire until I was 66. I disagreed with this but he was absolutely adamant that this would be the case. According to the government website, my retirement age is 65 years and five months. It actually falls on my daughter’s birthday.

Then the name of Remploy was brought up. Why Remploy, I asked, I have no disabilities. The only thing wrong with me, I said, is that I support Partick Thistle, nodding over my shoulder to the two Thistle-supporting work coaches who were behind me.

He said he would like me to come to the jobcentre on 29 May as Remploy would be there and they do a very good presentation. I paused and then told him I would not be able to be there as I had been invited to a music night in the Kyle of Lochalsh area where two very good friends from Canada had booked a cottage and very kindly asked me to spend a musical evening with them while they toured Scotland with two of their American friends.

Then there was a shake of his head and an intake of breath – "You are supposed to tell us about these things!" he said. I was not happy. I thought, jings (polite version), I can’t even have a private life.

He hinted that it doesn’t help with my job search. I tried to point out that there was such a thing as mobile internet, but this was not listened to. I lost it a tad and said: "OK, I will cancel the visit to my friends and go ahead and book me in for the Remploy presentation."

"No, it’s OK," he told me. I said: "No, go ahead, I will go to the Remploy thing, I don’t want to be hauled over the coals for refusing to go to a presentation."

"You won’t be hauled over the coals," he said. He then went on about having to apply for jobs outwith my fields of interest. I do so, but have had no success.

Then came the line which had me biting my tongue. He said: "We have tried to help you in the past, but you refused."

This was him referring to the Community Work Programme which I contested back in September. As readers will know I was against this programme which I saw as conscription, and considering I never got an official reply from a decision maker, I was not sanctioned and have been receiving my Jobseeker's Allowance.

This is the same Community Work Programme which was shelved in March because it was a failure and was not cost effective. I didn’t refuse the help, I was willing to take part in the programme, I was just not willing to sign any documents in relation to the programme, as was my right.

To me, his statement, "We have tried to help you in the past, but you refused", was deplorable. His statement annoyed me. Is this the official jobcentre view of me? For someone who I only see a couple of times when my regular work coach is not available, did he have the right to make this statement?

I kept my mouth shut and just noted his statement. I was appalled but kept my cool.

He wrote on a card when my next visit to sign-on would be. I asked him what about the fortnightly computer session, as he had not written this down on the card, which everyone else does – it keeps me and their record up to date – and he said just turn up as usual.

Later in the day, I visited my medical centre to get a 'well man' checkup. After some discussion, much of it being about what had happened that morning, it was recommended that I see a doctor as I had signs of anxiety and slight depression.

I managed to get an appointment later that day. I am to get some help.

The jobcentre episode went through my head that night and I was so angry at what happened. I did not sleep at all.

Just as I was reading this episode over, I received a text message on my mobile phone from he Department of Work and Pensions (DWP), what an amazing coincidence.

It reads: "We’ve changed your Jobseeker's Allowance because we have removed incorrect part time work details held on your claim. Your payment has not changed and will continue to be paid into your account."

Hopefully that is the end of it and I will hear no more on that particular matter.