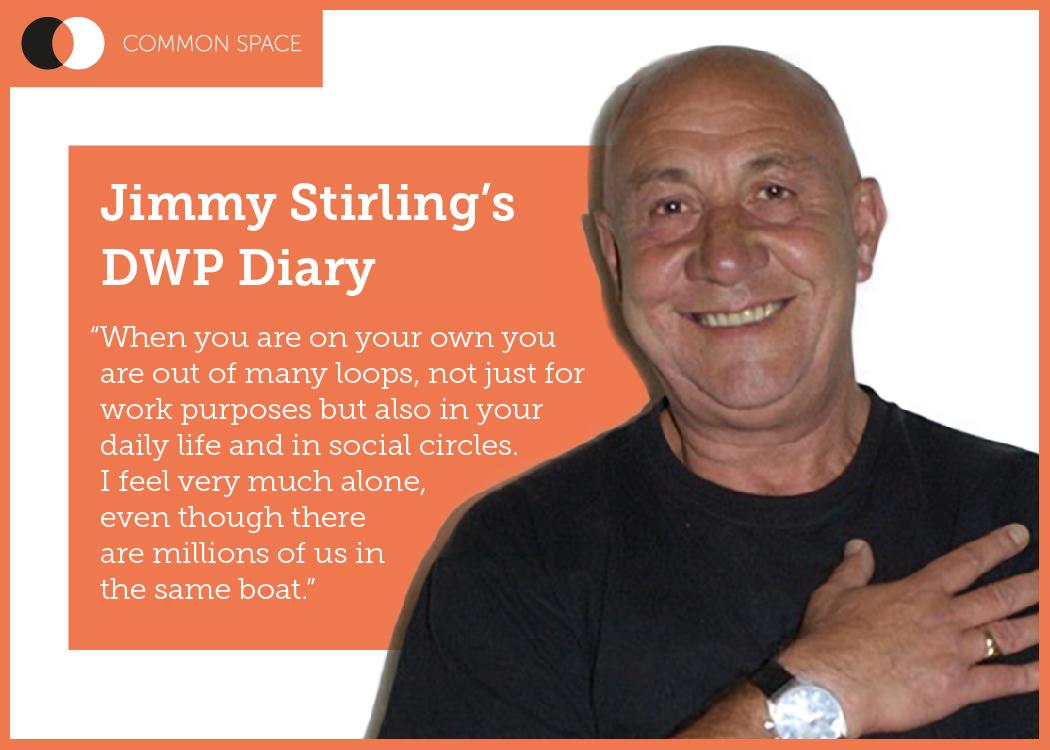 62-year-old Jimmy Stirling is feeling down about his circumstances, and the situation is made worse by another screw up at the jobcentre

It was my usual signing on today. No mention of Remploy. I was informed that I would have yet another new work coach when I next visit to sign on.

I am still reaching my target of applying for 10 or more jobs per week, however, very rarely do I get a reply and if I do get one, it is an ‘automatic’ reply informing me that, “After careful consideration we regret to advise you that you have not been shortlisted for interview as other candidates were more closely matched the job specification,” or words to that effect.

The DWP is still sending me vacancies for jobs well outwith my fields of experience, many of them part time and requiring the ability to drive.

When you are on your own you are out of many loops, not just for work purposes but also in your daily life and in social circles. I feel very much alone, even though there are millions of us in the same boat.

There are other influences that help to further depress. My downstairs neighbour doesn’t want me to grow any flowers in the small garden I created at the front and sides of my home. As it is a communal garden I have decided to accept his demand.
However, I took away all the garden tools which I bought over the years so that he will not be able to use them. I allowed him to use these including a mower to cut the grass. I thought that if he wanted to make rules then he should take responsibility of looking after the garden himself.

I really don’t need this nonsense but I still have a small patch of ground where I can grow vegetables. Gardening is very therapeutic for me and I will miss nurturing flowers from seed. There is much more to this, however, I will leave it as an indication.

I go to my half hour computer session on Wednesday and at 4pm it really mucks up your day, but it has to be done.

I am on a bit of a low at the moment but hopefully the better weather will lift my spirits.

I went to sign on today, however my new work coach was on holiday and I got someone else.

He asked if I had filled out a volunteer’s information form and I told him that I did in February and in March. He said that the one in my paper file was empty. I reassured him that I had filled in two forms in the past months.

I asked him where it was showing up on his system that I am supposed to be working, and he replied that it was on the internal system somewhere. I have absolutely no idea why this would be showing, I stick by the rules.

He said that he didn’t have time to sort it out at my signing time. He said I would have to come back in the following day to see if it can be sorted out. As I had a doctor’s appointment around lunchtime, he managed to fit me in at 9.20am. I said that’s fine.

I wonder why this thing about me working has cropped up. Is it a genuine error? Is someone trying to put the boot in? I have absolutely no idea. I imagine that after I go and visit the jobcentre to try to sort this out, my blood pressure at my doctor’s appointment will be rather high.