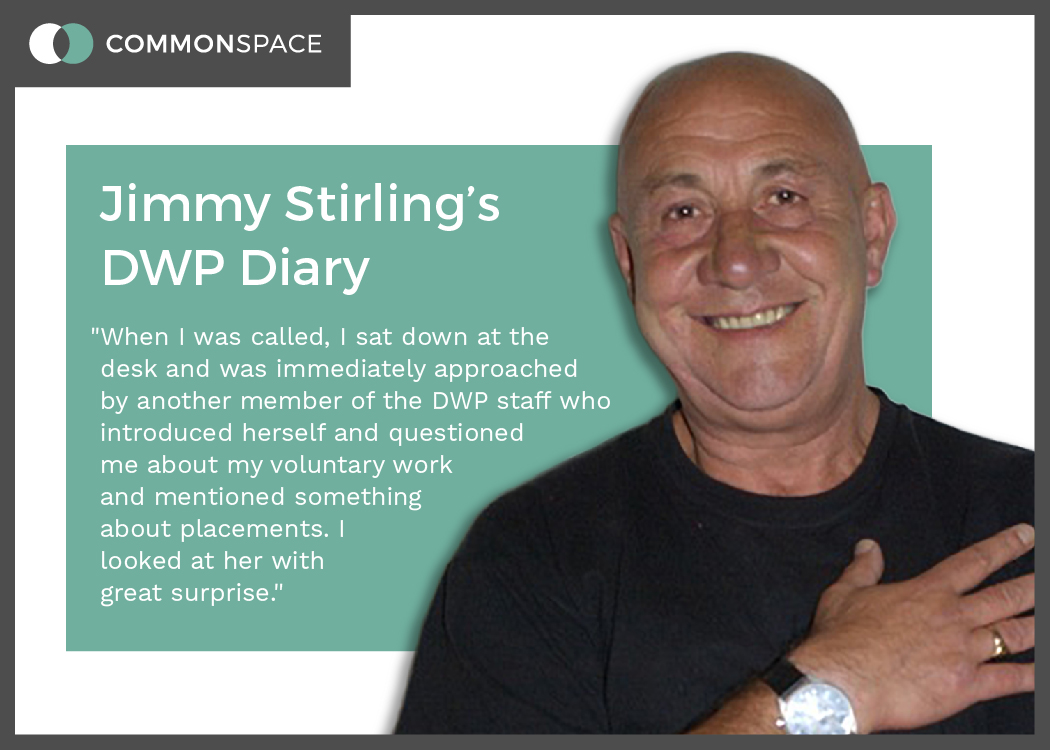 I receive Jobseeker's Allowance of £50 per week and have a very small pension payment of just under £25 per week. I do voluntary work for my neighbouring community and look after one of my granddaughters for two days per week.

I was recently conscripted to take part in the UK Government's Community Work Programme, where I would be forced to work for my Jobseeker's Allowance, which I see as slave labour. This not volunteering, this is not being paid a wage, this is conscription.

This was the day of the thunderstorms and downpours. This was also the day I was to attend court for the possibility of being selected as a juror.

As with my job applications, it was a case of not being chosen. By the time I was not required, it was easier for me to go straight to the Jobcentre for my usual signing on.

When I was called, I sat down at the desk and was immediately approached by another member of the DWP staff who introduced herself and questioned me about my voluntary work and mentioned something about placements. I looked at her with great surprise.

She said: "You look as if we're going to stop your Broo money or something!" That was very professional, I thought.

She knew some of the people in the charity for which I volunteer and told me that she would be speaking with them later in the week.

Then she asked if I walked to the charity’s premises or incurred expenses. I told her that I walk there but have my free bus pass anyway. She then went on about people who had found jobs via the charity because they were on placements. Good for them, I thought. I told her I was a volunteer. She went away.

I asked my work coach what that was all about. He apologised that he didn’t manage to give me any prior warning that his colleague was going to speak to me, and said it was something to do with work placements and volunteering.

Little alarm bells started to ring in my head. I signed on and left, slightly bewildered as to what had happened at the Jobcentre.

Voluntary work is because you want to do it, I got the impression that this DWP worker was trying to turn my voluntary work into a full time work placement, which is not voluntary at all.

The half-hour computer job search session at the Jobcentre, once again, proves fruitless as the browser crashes twice.

I had been in contact with an online firm called CV Now, who offer a professional CV-writing service. The cheapest price for having your CV looked at and rewritten by them is £79.

I contacted them to let them know that £79 was well above my weekly 'wage'. They said I could get it done in easier payment stages which would work out more expensively. I had to refuse their kind offer.

Today was the regular attendance to sign on at the Jobcentre. Very strange atmosphere in the place today: sombre, quiet, almost foreboding. I was not on great form either.

Work coach: "How is the job hunting going?"

Work coach: "What sort of work are you applying for?"

Me: "Design, marketing, admin, anything creative."

I signed and left.

What is next? "You are going to have to get a job!" he said. Is there going to be something coming of which we are not aware?