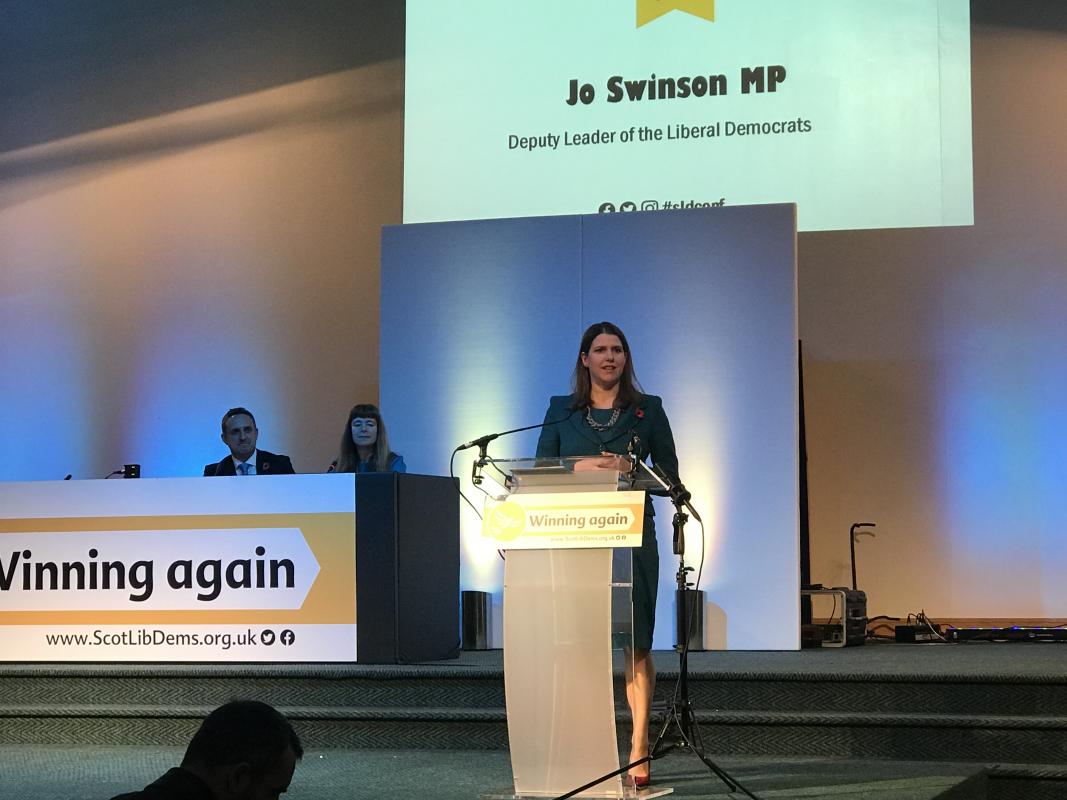 THE LIBERAL DEMOCRATS’ deputy leader has called for a 21st-century liberalism to deal with problems arising as a result of the EU referendum.

Jo Swinson told the Scottish Liberal Democrats conference in Dunfermline that her party should seek a more “positive, radical, 21st-century liberal solution” to deal with the resentment and anger growing in the UK after last year’s referendum on membership of the European Union.

According to Swinson, with the rise of populism, extreme nationalism and a UK government focused on a hard Brexit, now is the time to bridge the divides in our communities.

Swinson added that for millions of hardworking people across the UK, “the current system simply does not work for them”.

The East Dunbartonshire MP said: “We must seek positive, radical, 21st-century liberal solutions to these problems and more. This is not a time for an incremental change.

“The march of the robots into our workplaces means we need to rethink jobs.” Jo Swinson

“The march of the robots into our workplaces means we need to rethink jobs.

“Machines still have limits and will continue to do so. They cannot empathise or accurately mimic the full complexity of human interaction, and there are few signs they will be able to do so in the near future.

“Increasingly, this will be what separates us from them. Our very humanity will be more precious than ever.

“Our ageing population requires a growing care sector. Care work should no longer be dismissed as low paid and unskilled.”

“We should be more ambitious to save our planet.” Jo Swinson

Swinson added: “Instead we need a care revolution to place caregiving where it belongs: as a vital and hugely valued part of our society, with well-paid staff recognised for the significant skills they bring.

“We need to boost investment in renewable energy and step up the transition to electric cars too. The government has pledged to end the sale of petrol and diesel cars by 2040 but companies such as Volvo are showing how timid that is. In two years’ time, they will stop all production of petrol and diesel-only cars. We should be more ambitious to save our planet.

“This way, we can start to clean up our polluted cities. Respiratory-related illnesses caused by pollution are putting further stress on our already overworked and underfunded health services. By cleaning up our cities, we will help our NHS too.

“And while we’re on health care, we need some serious innovation: the NHS is – shockingly – the world’s largest buyer of fax machines.

“And while we’re on health care, we need some serious innovation: the NHS is – shockingly – the world’s largest buyer of fax machines.” Jo Swinson

“We’ve seen a rise in new apps that support NHS processes. Apps helping patients manage their medication, apps helping doctors with diagnostic processes. We need to invest in health technology to bring the NHS into the 21st century.

“Most importantly though, as Liberal Democrats we need to bring people together to create these answers to our shared challenges.

“We must not leave room for the populists to sow their seeds of division. This means getting out of what can, at times, be our own echo chambers and starting to bridge the divides in our communities. Our proud liberal tradition of community politics and grassroots campaigning means we know how to do this.”