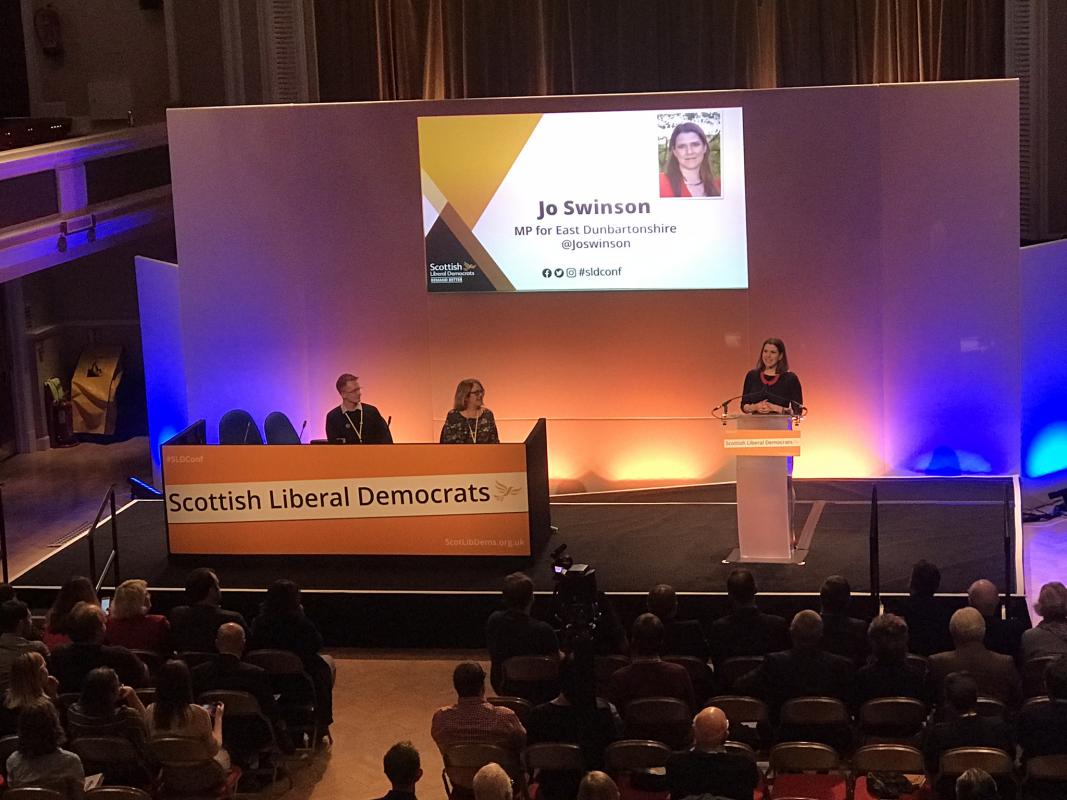 THE deputy leader of the Liberal Democrats has argued that UK politics is broken and the political fault lines have shifted at the Scottish Lib Dems spring conference, which begun on Friday [22 February].

The MP’s remarks at conference in Hamilton came after a week in which Tory and Labour MPs broke away from their respective parties to join the Independent Group, seen to be close politically to the Lib Dems.

Swinson said that the Tories and Labour “are like the banks during the crash. Too big to fail, too broken to work.”

“This week has shown just how broken those parties are,” she added.

“The political faultline has shifted. We’ve moved from talking about left or right, socialist or capitalist to talking about liberal or authoritarian, open or closed, internationalist or nationalist.

ANALYSIS: The Independent Group isn’t about changing politics – it’s about turning back the clock

“Like never before in my lifetime, liberal values are under attack, here in the UK and around the world. People are crying out for a vision for the future of our country that is open, outward-looking, internationalist and pluralist.”

Swinson reached out to the new Independent Group of MPs by saying that “you are disrupting the broken political system and as liberals, we are excited by this change.

“We share your desire to shake up the status quo, to challenge those in power who are failing our country.

“We need to ditch the outdated, tribal, two-party model. We need a better way of doing politics for a modern, liberal society.”

The centrist MPs have been opposed to the party’s left turn under Jeremy Corbyn, who became leader in 2015, with specific reasons given for their resignations being dissatisfaction with the Labour party’s approach to Brexit and its dealings with allegations of anti-Semitism in the party.

Just after the launch of the new group, founding member Angela Smith appeared on the BBC’s Politics Live programme when she said that “The recent history of the party I’ve just left suggested it’s not just about being black or a funny tinge.” Smith has since apologised for the comments.

The Independent Group was joined by Joan Ryan the following day who resigned for similar reasons. Ian Austin left the party today, saying he had become “ashamed” of Labour.

“[The creation of a new independent MP group] is a clearly a notable development in our politics and there hasn’t been anything of this nature within my lifetime.” Jo Swinson

Liberal Democrat leader Vince Cable said that he has “offered a hand of friendship to the new Independent Group” and sees “the way forward as a collaborative arrangement, a confederation of groups who have a lot in common”.

He added that the Liberal Democrats will not put up candidates against members of the Independent Group in future elections, but has not went as far as to say they would be part of establishing a new party.

After her speech, Swinson told journalists it is early days for any talk of a new party between the new Independent Group and the Liberal Democrats.

“There will be some areas where we will obviously disagree and to be honest it is quite possible within that group there might be areas that they do not all agree because there is not necessarily a fully fledged ideology behind it.”

Swinson added: “This is a clearly a notable development in our politics and there hasn’t been anything of this nature within my lifetime.”