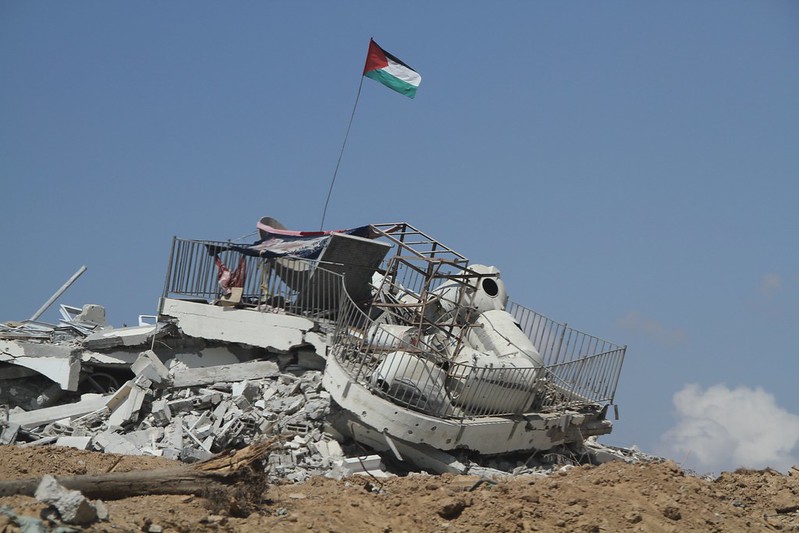 IT’S not every day you get the opportunity to ask a direct question of your country’s leader. I was lucky enough to get just that at an event in this year’s Edinburgh Book Festival.

Following a chat between Scotland’s First Minister, Nicola Sturgeon, and Indian writer, Arundhati Roy, the former opened up the discussion, inviting questions from the audience. My arm shot skywards, ready, primed to ask, “Given that Arthur Balfour hailed from East Lothian, near here, do you agree that the idea to twin Edinburgh with Gaza is a blessed initiative?”

Who? What? A daft, silly question and waste of an opportunity you might think. But is it?

Imagine someone came to your door and said that since their ancestors lived here 2,000 years ago, the house really belonged to them. One can guess the standard response were it a Scots door. But the following day they come back with the police who say, yes, the law says they have a right to half your home. Imagine further that they invite all their family and friends from all over the world to come and live in your home and now, over 70 years later they occupy upwards of 80 per cent of the house. Would you call that a catastrophe? A Palestinian would, but he or she would give it in Arabic; Nakba.

But who has the time and energy to worry about Palestine? We’ve Brexit, possible extinction and Scotland’s latest fiasco attempt to qualify for a major football tournament on our collective plate. What’s more, Palestine is a dense topic. It’s one of those unfathomable, never-ending problems akin to solving a Rubik’s cube when severely colour-blind. Even those who support Palestinian rights can’t agree; one-state, two-state, blah blah. Fair enough. I can remember two teachers in a modern studies class at high school staging a debate – one as an Arab, the other an Israeli – that descended into a theatrical shouting match that ended with big Mr Hamilton banging his palm on the desk and storming out of the room. Highly entertaining, but what did we learn?

Presumably, the lesson was that this dispute has no solution agreeable to both sides and that unfortunately such troubles do exist in the world – oh dear. In fact, that about sums up what we still learn about that part of the world as adults. Twinning with Gaza is not a solution but a very modest proposal for the people of Edinburgh, or any city for that matter, to concretely and positively affect the lives of people long in dire need of our help – the people of Gaza.

Today, what remains of Palestine is either under military occupation or as former Conservative Prime Minister David Cameron characterised Gaza, ‘an open-air prison’. Two million people are crammed into a prison in one of the most densely populated regions of the Earth. Not an ideal context in which to raise children, but this particular prison is packed with one of the youngest populations on the planet; most Gazans are kids, 51 per cent of whom are under 18 years of age.

According to the World Bank, it has an economy that is 90 per cent dependent on government expenditure, UN and other external donations. Barely an economy at all. UN reports state that 95 per cent of the water there is not fit to drink and Gazan health professionals are on the verge of declaring an epidemic with the resultant rise in water borne disease. Access to electricity is confined to just a few hours daily and some of these endless reports now debate over the point in the near future at which Gaza will actually become unliveable. Perhaps it would be better if, as Nobel Peace Prize laureate Yitzhak Rabin put it, Gaza would just sink into the sea.

70 per cent of Gazans are also refugees. Refugees, as we know, are people who flee war and terror. Yet the people of Gaza have endured a series of ‘operations’, a handy euphemism for massacres, including that of children. From these, there is nowhere to flee – unless it is of course, it is into the sea.

I remember while living in Italy some years ago, I met a saintly character called Peppe Pio.  It was from Peppe I first learned of the Balfour Declaration, a public announcement issued by the British government declaring British support for the establishment of a “national home for the Jewish people” in Palestine in 1917, then part of the Ottoman Empire. It effectively promised the support of the most powerful state on the globe at that time for a Jewish state on land where 90 per cent of its then population were non-Jews.  And it was pioneered and bears the name of one Arthur Balfour – a Lothians man.

Peppe and I spoke a lot on these matters and he was unequivocal in his condemnation of Britain’s role in Palestine’s plight, and in arguing that every capital city in the UK should at least ‘sister-up with Gaza’, as he put it.

On returning home to Auld Reekie earlier this year, I was both amazed and delighted to discover that such a campaign to twin Edinburgh with Gaza did in fact exist, that a small group of activists were trying to realise Peppe’s idea by collecting signatures on a petition to say sorry for Balfour and to sister-up with Gaza. Should I have been surprised? Many think of Edinburgh as a very snobbish city, a bastion of conservatism, but like all cities, there is more than one Edinburgh. Burns wrote:

With open arms the stranger hail;

Their views enlarged, their liberal mind,

Above the narrow, rural vale;

Whether or not the city Rabbie described ever really existed, if you wanted to prove it accurate now and the city were to do that by choosing to twin with another municipality, where in the world should it choose? Whose cries of distress should it acknowledge? Looking around the planet today, there’s no lack of candidates which, campaigners tell me, is a stock response from some among the city’s elected officials, ‘we can’t twin with them all’. One even opined, ‘why don’t we twin with Tel Aviv’? This from a Labour Party councillor. Where in the world today will you find people enduring what anthropologist Patrick Wolfe has called, ‘the logic of elimination’ if not Gaza?

For me, Israeli historian Ilan Pappe got it right when he described the Edinburgh-Gaza twinning campaign as a ‘Blessed Initiative’. The choice of the word ‘blessed’ is an interesting one. It can mean that something is holy or hallowed; what is more holy than helping those ignored and forgotten who suffer, Frantz Fanon’s ‘The Wretched of the Earth?’ As someone who writes beautifully and clearly on what she calls “the physics of power”, Arundhati Roy knows well-enough whose boot is on whose neck in her understanding of historical and current relations of power in the region. And she certainly knows of the name Arthur Balfour. I can still remember the thrill I felt when I thrust my arm up to ask the question. In truth, I can think of no-one I’d rather be sitting next to the FM when I asked it.

‘Blessed’ can also be used to refer to something welcome or longed-for. In these divisive times, what could be more welcome than a proposal that brings people together, one-stater, two-stater; independista, unionist; Brexiteer and Remainer?  It also means that something is approved or endorsed. The current mayor of Gaza supports it. Given that Glasgow is currently twinned with Bethlehem and Dundee with Nablus, in the occupied West Bank, why not our capital? And why not with Gaza?

Twinning, or sister cities, developed as a phenomenon following WWII to foster friendship and understanding among different cultures and between former foes. Could the twinning of Edinburgh with Gaza, though to an extent symbolic, not at least recognise and begin to take responsibility for the role played by a son of the former in the plight of the latter? Responsibility, as Canadian physician Dr. Gabor Maté defines it, is not about blame or that you caused something but the ability to respond in the present moment to what’s happening.

This response could provide practical assistance to a people under a brutal and illegal siege.  Help with sewage, clean water and general infrastructure provision for instance. Young people in Gaza are turning to programming as a way to break their confinement; groups such as Gaza Sky Geeks offer a community with 50 per cent unemployment some economic option, for cyberspace is the only territory that Israel cannot sanction. And Edinburgh is a city that needs IT skills big-time, with most work presently going to India.

There are also concrete examples of what can be achieved from Glasgow and Dundee; for instance, the latter’s donation of refitted fire engines by the city’s fire brigade union. There are Gazan students studying in university in these cities now who would not be there were it not for the initiative of these councils. The prospects too for educating the people of Edinburgh on the current and historical situation in Palestine would improve, including both the British and Scottish Governments’ response to that reality.

A former First Minister once spoke of an independent Scotland being a beacon of progressiveness. Independent or not, this act might prove an example that went beyond mere words, one which could spark other cities to follow suit. Would it be fair to say that the more cities that twinned with Gaza around the world, the more likely it would make those planning any future ‘operations’ think again, possibly saving lives? And if not, might it not help ensure we are better informed of such actions if and when they do occur? Any reasonable person would have to say, yes. That alone might seem reason enough. In which case, someone has to be first, so why not Scotia’s darling seat?

In 2014, after much debate and discussion, Scotland was asked whether or not it wanted to be an independent country. A big part of the conversation then involved what kind of country it hoped to be. What values did it aspire to both domestically and internationally? It seems likely this national chat is to be rekindled. Whatever her direction of travel, in the UK or not, in the EU or not, who could reasonably object to Scotland’s capital twinning with Gaza? No boycott is even proposed, no divestment nor sanctions requested. Did the First Minister think it a good idea?

Sadly, I didn’t get to ask the question as Sturgeon didn’t pick me to ask one. Those assembled didn’t get to hear her or Arundhati’s response and no discussion was generated. In February 2020 however, Edinburgh city councillors will meet to discuss it. And with enough support, might declare to the world that Edina can indeed still hear and display solidarity with the people most egregiously impacted by this “greatest mistake in imperial British history”.

If you agree and are a resident of Edinburgh, you can sign the petition at www.tinyurl.com/gazatwinregister