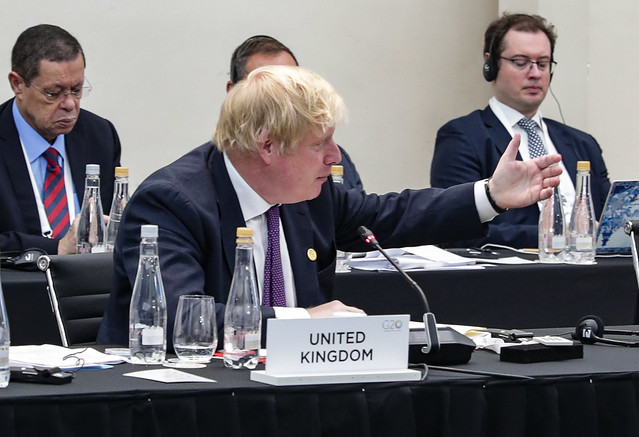 John Davis, Professor of Education at The University of Strathclyde, analyses English nationalist assumptions about Scotland’s place in the Union and what the reaction to the Inner House Of The Court Of Session prorogation ruling tells us about Tory shame-game politics

IT IS so sad that it takes an MEP to summarise the current state of the Tory broken union and to show us what has been there, under our noses, for many years.

When on 4 September I listened to MEP Philippe Lamberts explain to Channel 4 what had become of the Tory Party’s Unionist veneer, I felt a release. Finally a European who grasps what the pain of Brexit means for Scotland.

“This has become an English national party, a Brexit party, not really better than Farage’s party.”

MEP Philippe Lamberts, who’s in the Brexit Steering Group, says “there’s no negotiation” with the UK – and that Boris Johnson wants a no-deal Brexit to happen. pic.twitter.com/PnoEjuHPPi

“They claim to defend the United Kingdom, to be a Unionist Party, in all its parts etc, this is rubbish, they are English Nationalists and they want hard Brexit,” Lamberts said.

In the future, when historians analyse this period of five years since the 2014 referendum, they will see that the Tory party had, actually, fully revealed its English nationalist-self the day after the independence vote when David Cameron stood outside Downing Street and declared his English Votes For English Laws (EVEL) policy. The Tory party came out as the English Nationalist party that day.

That day Cameron disowned his one-night-stand with the Labour party and for the last five years Gordon Brown has hung around like a character who can’t understands why he no longer gets invited to the main event. Watching from behind the cordoned off tape of the parking lot, occasionally appearing in the shot of the camera crews that await the glitterati, he can be overheard pleading: ‘what about the vow Mr Johnson’, and wondering ‘why does dear David no longer returns my calls’.

Any last vestiges of the illusion that Scotland matters in the Tory mind-set, flew away on Wednesday [11 September].  The Tories, and many on social media, showed their complete ignorance of the history of Scots law within the Union. Irrespective of the outcome of the Inner House of the Court of Session appeal ruling that the Prime Minister acted illegally when seeking prorogation, the Tory initial knee jerk reaction reeked of dismissive, patronising, shame-game politics.

READ MORE: Robin McAlpine: This is the one thing which can save Westminster

The first set of media briefings sought to downgrade the ruling because it was “Scottish”, “biased” and “contradictory”.  The assumption was put about that, “it is just a bunch of jumped up jocks and English law will always trump Scots law”. Such a spiteful reaction tells you all you need to know about the current Tory English Nationalist mind set. “If they actually believed in the Union (and this comment also applies to all those from down south who love-bombed us in 2014) they might have bothered their arses to spend five minutes acquainting themselves with our customs, cultures, histories and legal processes.  They might have tried to grasp the fundamental protections that enshrine our rights as Scots living under a different legal system. Yes, our system is no longer fully independent.  The development of the European Convention on Human Rights means that our law is now tested in the supreme court. But, the supreme court includes Scots judges and will test the case on its merits against Scots and EU law.

It is possible for the supreme court to uphold the Scots ruling that Johnson acted illegally and also uphold the English ruling that he did not. If such decisions come to pass, Johnson will have been found to have acted illegally – English law will not trump Scottish law. That Tories wish it not to be so gives them a very good reason to dissolve the union.  That Number 10 initially sought to trash the decision, demonstrates, yet again, their complete lack of empathy for Scots’ perspectives.

Tory lack of willingness to engage with, learn about, or, accept Scotland’s different legal cultures and processes is not new.  Yet, their slash and burn reaction towards Scots judicial decision-making has significance beyond the straight-forward conclusion that this is just the usual English nationalism at play. Yes, the reaction comes from a Tory leader with a history of insulting Scots, but it has a more significant meaning than that.

A more meaningful and concerning (for Scots Unionists) analysis suggests that the leadership in England have read the opinion polls and know that the game is up in Scotland. They have concluded that there will be very few Tory seats left after the next election and that, in the longer term, you can insult Scots as much as you like because Brexit means Scottish independence is inevitable.

Traditionally, Tory narratives claim that the UK subsidises Scotland – so some less astute Tories will warm themselves with the idea that they will gain a fiscal windfall by jettisoning Scotland. If you are looking for financial reasons why some Tories should not want Scotland to become independent a Guardian article by Iain Macwhirter, columnist in the Herald and the Sunday Herald, pointed out that the UK rely on us to keep subsidising their grand projects in London. And, yet, the initial Tory response to the Scot’s legal ruling suggests that the little Englanders in the Tory party believe themselves to be above our laws; do not care whether they injure Scotland’s feelings; feel no need to understand our perspectives; and have no wish to demonstrate a single ounce of empathy for the situation that Scots folk find themselves in nor to the folk who subsidise their grand plans.

The polls suggest voters in England are ready to ‘let’ Scotland go and the Tories seem happy to fuel the flames of nationalism on both sides of the border.  The Tory leadership know that there are very few Westminster seats to be garnered in Scotland and that the financial hit of Scottish Independence is a price worth paying, if it enables them to achieve their separatist and xenophobic aims, and gain power, by winning enough English seats at Westminster.

These are troubling times if you approach life from a social justice perspective.  Scotland’s anti-discriminatory approach to independence – you are a Scot if you live, work or love here – is not replicated by English Nationalist Tories who want to pull up the Brexit drawbridge behind them.  English self-harm will have an impact on their economy and ours, but, of more concern is the way that it is also placing extremism at the heart of their social fabric.  Gordon Brown, seeks, in part, to blame UK extremist politics on Scottish independence supporters.  Shame on you Mr Brown – time to actually spend some time with us and put your considerable experienced shoulder to the wheel that turns the wagon on the road to a better way of life.

Mr Brown’s generation fear the financial risks of independence and yet their critics, like Macwhirter, call out as Jock-baiters and border line bigots those in England who characterise us as too wee, too poor and too stupid.   Macwhirter argues that: “Scots are not fools; they can add up. They realise only too well that, as an independent nation, Scotland would be one of the wealthiest countries in the world.”

Columnists like Macwhirter are correct, we need to, as soon as is possible, provide the Scottish Government, and ultimately the Scottish people, with the political and economic leavers of independence that will enable us to chart our way out of the present and worsening Brexit economic crisis. But, we also need independence to show the world what an empathic and generous nation can look like.

An independent Scotland will not only show the remainder of the UK how to take a different economic approach based on the best interests of its citizens, it will also, through its anti-discriminatory politics, demonstrate how a contemporary approach to independence can enable us to move beyond a politics of greed, shame and disconnection. An independent Scotland will be able to shift to a politics of empathy, perspective taking, human rights and the common weal.  That type of politics, Mr Johnson, will not involve political leaders down playing our abilities, insulting our intelligence, ignoring our democratic mandates, nor attacking judges when they uphold our rights as equal citizens under the law.