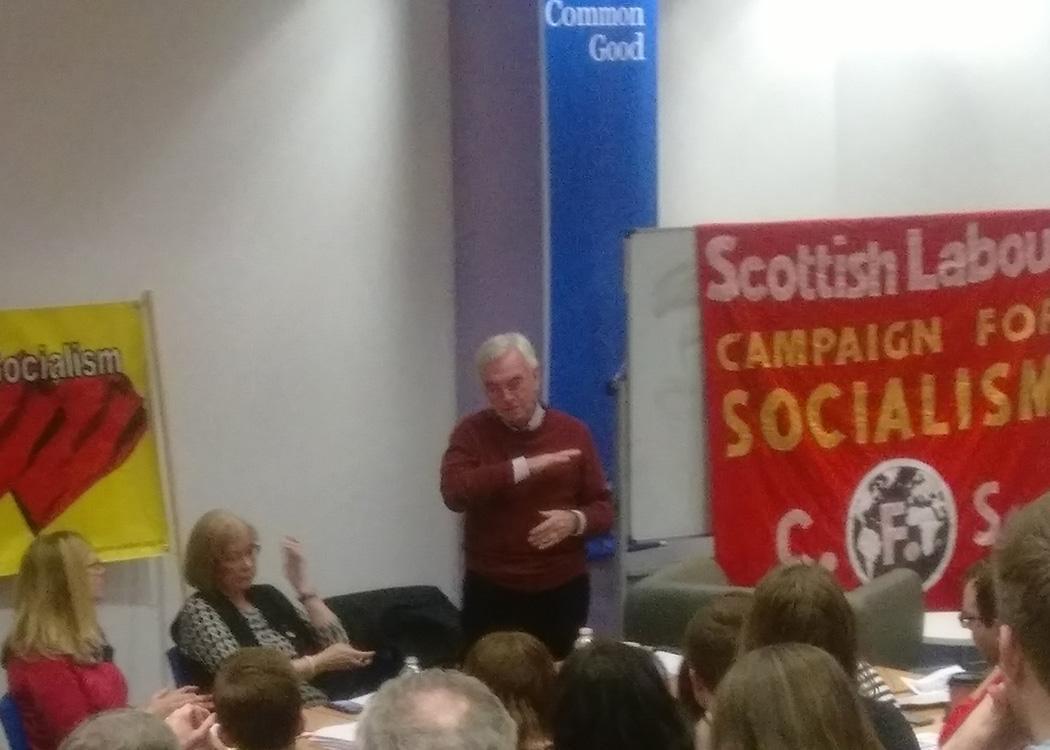 15/02/2016
david
Shadow chancellor refuses to endorse UK federalism or any other constitutional approach to Scotland
JOHN McDONNELL has said that Jeremy Corbyn’s Labour party leadership will survive a disappointing election for Scottish Labour in the Scottish elections.
Addressing an audience of supporters and party activists at Glasgow Caledonian University, the shadow chancellor acknowledged that the “difficult” May elections in Scotland, which Labour are expected to lose badly to the SNP, would be used by opponents in the parliamentary Labour party to attack Corbyn.
He said that Labour’s current leftist leadership, of which he is the most authorative figure after Corbyn himself, should prepare itself to ride out May “setbacks”.

“We won’t allow the right to use this against Jeremy Corbyn.” John McDonnell

“We won’t allow the right to use this against Jeremy Corbyn. There will be setbacks but we will continue to build the movement. We are not just an electoral machine, we are building a mass movement,” McDonnell told CommonSpace.
McDonnell also said that elections across the UK would prove a challenge to the party and to the new leadership, which has been in place since September 2015.
In January Patrick Heneghan, Labour’s elections director, told Labour’s shadow cabinet that the party would face difficult elections across the UK, to devolved parliaments in Scotland and Wales and in English local elections, where he predicted the party could lose 200 seats.
McDonnell said: “We know these will be difficult elections. In Wales we’ve got a challenge, we’ve got a challenge from UKIP in places, the London mayoral election will be a tough fight as well.”
The rally, which preceded an internal meeting of the Campaign for Socialism (CfS), the largest left wing Labour faction in Scotland, also heard disagreements over what the Corbynite approach to constitutional matters in Scotland should be.
Scottish Labour MSP Neil Findlay told the meeting that he had met with McDonnell to urge him to agree to a “federalist” approach to the Scottish independence debate.

“We need to get the constitutional issue right, or Labour can’t come back in Scotland. We need a federal model for the UK.” Neil Findlay MSP

He said: “We need to get the constitutional issue right, or Labour can’t come back in Scotland. We need a federal model for the uk.”
However, McDonnell said that constituional matters are “not my place” and that it would be up to Scottish members to decide. Sandy McBurney, a party member who joined in the wake of Corbyn’s leadership victory, told the meeting that the party should not adopt a federalist approach as it would lead to “nationalism”.
The meeting also confirmed CfS as the vehicle for the Corbynite left in Scotland. Around twice as many activists attended the rally as the launch of Momentum , the official Corbyn supporters group.
Elaine Smith MSP stood down as long term convenor of CfS after the rally, to be replaced by Findlay.
CommonSpace journalism is completely free from the influence of advertisers and is only possible with your continued support. Please contribute a monthly amount towards our costs . Build the Scotland you want to live in – support our new media.
Picture: CommonSpace
Common Space
Archive
Share Article: