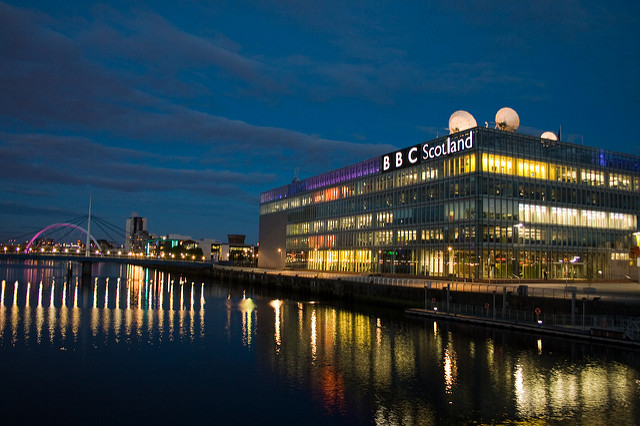 "SCOTLAND’S education system is doing better than politicians [Unionist] claim, according to an international expert." (STV News, 31 August 2016 at 6pm)

"The Scots are the most resilient kids in the world … so some of the best chances if you’re from a poorer home about not just being proficient but getting right on to university. And it scores better on international metrics than the rest of the UK." (Professor Andy Hargreaves)

Both STV News at 6 and BBC Reporting Scotland covered the launch of the Scottish Government’s advisory panel on education. STV included the above quote from the professor. BBC Scotland did not.

The BBC report on the advisory panel reeked with the aroma of a bitter, grudging, cynicism, unworthy of any serious broadcaster.

Now, I know it’s only one example but readers will be aware that BBC Scotland has "previous" on this going back at least as far as 2014. If you need a reminder of the extent to which STV has widened the gap in terms of journalistic quality and impartiality between it and BBC Scotland, you might like to be reminded, in my 2015 report, Propaganda or Professionalism on Pacific Quay? How political issues were covered by BBC Reporting Scotland and STV News in the four months before the UK General Election.

The BBC report on the advisory panel reeked with the aroma of a bitter, grudging, cynicism, unworthy of any serious broadcaster. That they were reporting on a serious-minded and genuine initiative to improve the prospects of disadvantaged children, in such a way, suggests utterly corrupted sensibilities.

Not only were the professor’s encouraging words left out (the professor’s deeply impressive track record is listed at the bottom of this article) but instead we had the implication, from Andrew Kerr, that Scotland’s education system had been "top of the class" in the Victorian era (unsubstantiated and perhaps entirely mythical) but not since. How ill-informed he is.

They did find time for two sad suggestions from the Tories and from Labour’s Iain Greyday, that the initiative might be only be a smokescreen to hide other failures. Really, even if you weren’t an SNP supporter, would you really think that? Does he really think the first minster is the kind of apparently morally bankrupt politician he knows so well among Labour leaders such as Blair, Brown or Murphy?

Readers might also like a reminder of hard evidence that the Scottish education system is generally more successful than many unionist politicians like to suggest it is, as Professor Hargreaves clearly knew already.

At the end, Mr Kerr even seems to be patronisingly reinforcing that sort of view by suggesting that this is all about the first minister seeking an "A for effort".

Readers might also like a reminder of hard evidence that the Scottish education system is generally more successful than many unionist politicians like to suggest it is, as Professor Hargreaves clearly knew already.

Were you to complain about the omission of Professor Hargreave’s tribute to the Scottish system, you would get nowhere. I’ve tried before.

Professor Hargreaves: Andy Hargreaves is the Thomas More Brennan Chair of Education in the Lynch School of Education at Boston College. Before this he was the founder and co-director of the International Centre for Educational Change at the Ontario Institute for Studies in Education (University of Toronto).

Until he moved to North America in 1987, Andy taught primary school and lectured in several English universities, including Oxford. Andy has held visiting professorships and fellowships in England, Australia, Sweden, Spain, the United States, Hong Kong and Japan. He is holder of the Canadian Education Association/Whitworth 2000 Award for outstanding contributions to educational research in Canada.