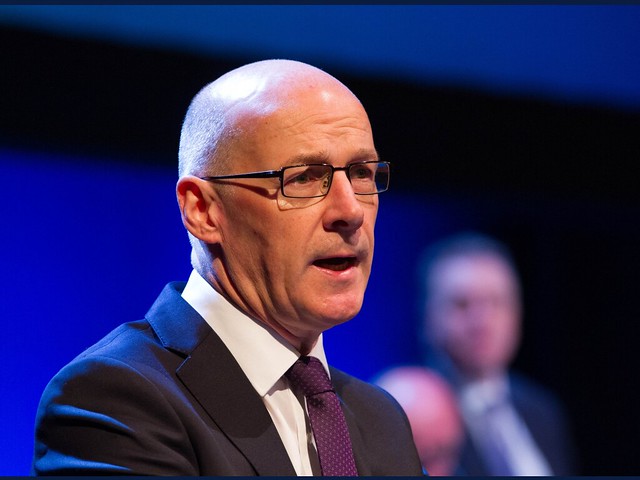 Following the publication of a review into his flagship education reform, Swinney announced that the Scottish National Standardised Assessments would continue with “important modifications”

OPPOSITION parties have held firm in demanding that the testing of P1 children be scrapped, following the conclusion of a review into the use of Scottish National Standardised Assessments (SNSAs).

A review of Education Secretary John Swinney’s flagship reform was announced after opposition parties successfully voted in September 2018 for the tests to be scrapped at P1 level, inflicting a major defeat on the Scottish Government.

Addressing MSPs this afternoon, Swinney announced that there would be “important modifications” made to the SNSAs in response to the recommendations of literacy expert David Reedy, the review’s author and former member of the Cambridge Primary Review Trust, whose independence and objectivity was stressed repeatedly by Swinney.

Released today, Reedy’s report stated: “As part of teachers’ professional judgements the P1 SNSA offers a useful standard element within the overall evidence to inform judgements about learning and teaching.

READ MORE: ‘Why no independent review before P1 testing began?’: Questions raised over timing of announcement

“Despite concerns expressed about P1 SNSA data being used for high stakes purposes, the review has not found any evidence that benchmarks or P1 SNSA data are currently being used to set targets, make comparisons between schools, including league tables, or for teacher appraisal, nor that there are any plans to do so.”

The report concludes: “The review finds that P1 SNSA has potential to play a significant role in informing and enhancing teachers’ professional judgements and should be continued with modification and safeguards against a drift towards high stakes.”

Swinney said in a ministerial statement on the matter: “I do not suggest this review has delivered an unqualified green light to the Scottish Government in terms of P1 assessments. Clearly the review makes important recommendations about improvements.”

“I accept that there is work to be done, but believe with the improvements proposed we can move forward in the correct direction.”

“I accept that there is work to be done, but believe with the improvements proposed we can move forward in the correct direction.” Education Secretary John Swinney

The SNSAs were first introduced by the Scottish Government in 2017 and applied to pupils in P1, P4, P7 and S3, eliciting controversy from teachers’ unions, education experts and opposition parties from the outset, who expressed a number of concerns ranging from their efficacy as a diagnostic measure of children’s progress, to the possible psychological impact of standardised testing at an early age.

Following claims that some children had been reduced to tears by the testing experience, Swinney said that he had been “reassured” by the review’s conclusion that there was only “scant evidence of children becoming upset when taking the P1 SNSA”, and cited evidence that 91 per cent of children surveyed said they enjoyed the tests.

Swinney announced that the Scottish Government will seek to improve the guidance and training for teachers regarding the assessments, and will work with local authorities and schools to develop a uniform code of practice. Following the publication of a draft action plan today, a full plan will be published by the beginning of the new school year.

However, opposition MSPs remained critical of Swinney’s interpretation of the review findings and of the SNSAs themselves.

Speaking ahead of the ministerial statement, Scottish Green education spokesperson Ross Greer MSP said: “These tests were introduced in the face of widespread opposition from teachers, parents and education experts, parliament has already voted to scrap them at P1 and the Education Committee recently published a damning report into their introduction, detailing the lack of a clear purpose and the contradictory explanations from John Swinney himself.

“It’s past time the Deputy First Minister admits that everyone else might just have been right all along, the educational benefit of these unwanted and unnecessary tests just isn’t there and therefore, he is scrapping them immediately.”

Speaking after the deputy first minister’s statement to parliament, Scottish Labour’s education spokesperson Iain Gray MSP said: “It remains an act of supreme arrogance for John Swinney to continue to defy the will of the Scottish Parliament.

“The Parliament said in September that testing Primary 1 pupils must end, yet the SNP government continues to ignore that decision.

“The review reflects many of parliament’s concerns, including the lack of a clear rationale for the tests.  It says the results cannot provide national data or compare school with school in the way Ministers have repeatedly said they could.

“Parliament was right in September and it is still right today. The testing of Primary 1 pupils should stop.”

Scottish Liberal Democrat education spokesperson Tavish Scott MSP also commented: “This review is a stitch-up. Teachers, unions, parent groups and Parliament have all called for a halt to the testing of four and five year old boys and girls. But the Education Secretary wants them to continue, so he’s commissioned a review that will prove himself right.

“Teachers already have far too much on their plates. They’ve made clear that these tests waste ridiculous amounts of classroom time, add nothing to what they know about their pupils and bulk up their workload.

“What today confirmed is that the Education Secretary plans to make their lives harder.

“Not only will be there be an endless stream of new guidelines. The government will impose a handy new eight point action plan to guide teachers through the tests they’ve already made abundantly clear are worthless. No wonder teachers are sick to the back teeth of Mr Swinney and this government.”

Larry Flanagan, general secretary of the EIS teaching union, also said: “David Reedy’s report, with its 28 recommendations for improvement, would seem to be a clear indication that the Scottish Government got it wrong on P1 standardised assessments first time around.

“An EIS concern with even more guidance is the simple fact that in the first round of assessments 24 out of 32 local authorities set aside the guidelines they had been party to agreeing, leading to many of the problems which teachers reported.

“There is no great confidence that the Scottish Government can ensure compliance this time round when it failed so miserably in the past.” EIS general secretary Larry Flanagan

“There is no great confidence that the Scottish Government can ensure compliance this time round when it failed so miserably in the past. The fact that some local authorities are continuing with additional standardised tests simply heightens EIS concerns in this regard.”

Speaking to CommonSpace, the teacher and journalist James McEnaney said: “John Swinney has certainly dialled down his trademark bullishness, but I don’t really see that today’s publications get us any further forward.

“The report asks [the Scottish] Government to make some statements about things like assessment purposes, but give that the government itself has never been able to be clear about those – including the difference between formative and summative assessments – I suspect that the next stage of this utter shambles of a policy will be just as fraught as the others.”