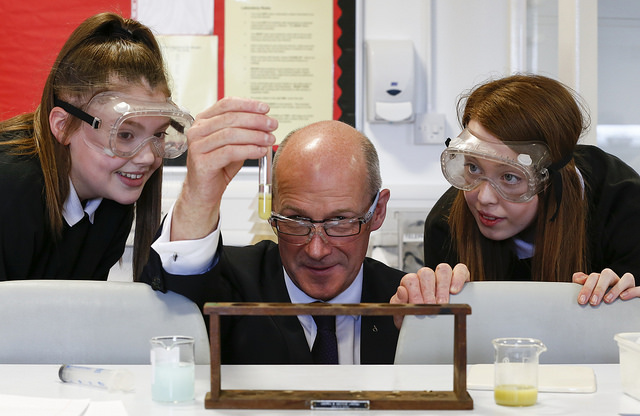 SCOTTISH EDUCATION SECRETARY John Swinney launched a review of how Scottish schools are to be run, prompting caution from local authority bodies and teaching unions.

In a statement made on Tuesday the secretary refused to rule out giving schools controlling say over the pay and conditions of teachers sparking concerns that the government would seek to lessen the role of local authorities like reforms in England.

Previously stating that educational achievement was the main focus of their administration, Swinney also suggested that role of national bodies such as the Scottish Qualifications Authority (SQA), Education Scotland (ES) and the General Teaching Council for Scotland (GTCS), is also up for discussion during the consultation.

"There is plenty to be celebrated within the Scottish education system and to proceed in a hasty manner could do irreparable damage for future generations." COSLA

Larry Flanagan, general secretary of the EIS teaching union, said: "The EIS believes that there is scope for greater support being provided to schools without compromising local democratic accountability.

"The focus of any governance review should be on how teaching and learning can be supported more effectively, rather than evolving into a turf war between the Scottish government and local authorities."

A prime reason for the shakeup has been the gap in educational attainment between children from low income backgrounds and middle class households but on top of this is the gap in attainment among schools in deprived areas of Scotland.

The Joseph Rowntree Foundation (JRF) found that the gap between children from low-income and high-income households started early with the gap in attainment levels among children aged five already reaching between 10 to 13 months in education terms.

Furthermore by the ages of 12 and 14 (S2), pupils from wealthier areas are more than twice as likely as those from the most deprived to excel in numeracy.

"Councils are uniquely placed to support every need of the child due, in no small part, to the expertise and professionalism of all their employees who make a difference to families every single day." COSLA

The Convention of Scottish Local Authorities (COSLA) after hearing the announcement warned Mr Swinney to proceed with caution and remember the importance of all stakeholders and branches of governance in education with a COSLA spokesman, who said: "Obviously today is only the start of a consultation process, however that said I think we remain concerned that this is as open as we would hope and that we are not facing a set of pre-decided outcomes.

"Once again we would appeal to Mr Swinney to proceed with caution. The aim of central government, local government and all those with an interest in young people is the same, we all have similar aspirations, we all want them to succeed.

"The OECD report, on which this governance review is heavily based, said clearly that improvements were required to process not structure.

"Obviously COSLA will respond to the Consultation but our position, along with those on the frontline and the education experts is clear. There is plenty to be celebrated within the Scottish education system and to proceed in a hasty manner could do irreparable damage for future generations.

"We know that there is room for improvement in the system and indeed we have actively promoted a number of proposals and we are up for playing an active role within that improvement/change agenda.

"We also know from evidence that it is wrong to treat any aspect of a child’s development in isolation.  Councils are uniquely placed to support every need of the child due, in no small part, to the expertise and professionalism of all their employees who make a difference to families every single day."

"The EIS believes that there is scope for greater support being provided to schools without compromising local democratic accountability." Larry Flanagan

During the speech in parliament John Swinney slammed the UK government's proposed plan to return to a grammar school selective system emphasising that there were no intentions for such a system to be brought in to Scotland.

Both 'free schools' and academies are state funded with private interests but are run virtually independent of local or central government with head teachers more actively involved in budgeting and curricular direction.

Swinney said that his "presumption was that teachers’ terms and conditions would remain a national issue" but he added that he wanted an "open" and "participative" debate about "all factors that could make a real difference at school level".

The Scottish Government school governance review will run from now until 6 January 2017.

He said that the government was committed to a comprehensive education system and that authorities would continue to exercise democratic control over Scottish education at a local level.

On the issue of local governmence for schools he said that "educational regions" could be created to allow local councils to collaborate more on support for education.

The secretary also confirmed he would have monthly meetings with Stephanie Primrose, the education spokeswoman for COSLA, to express the importance of collaboration.

The Scottish Government school governance review will run from now until 6 January 2017, as the government seeks opinions from parents, teachers, unions and others.