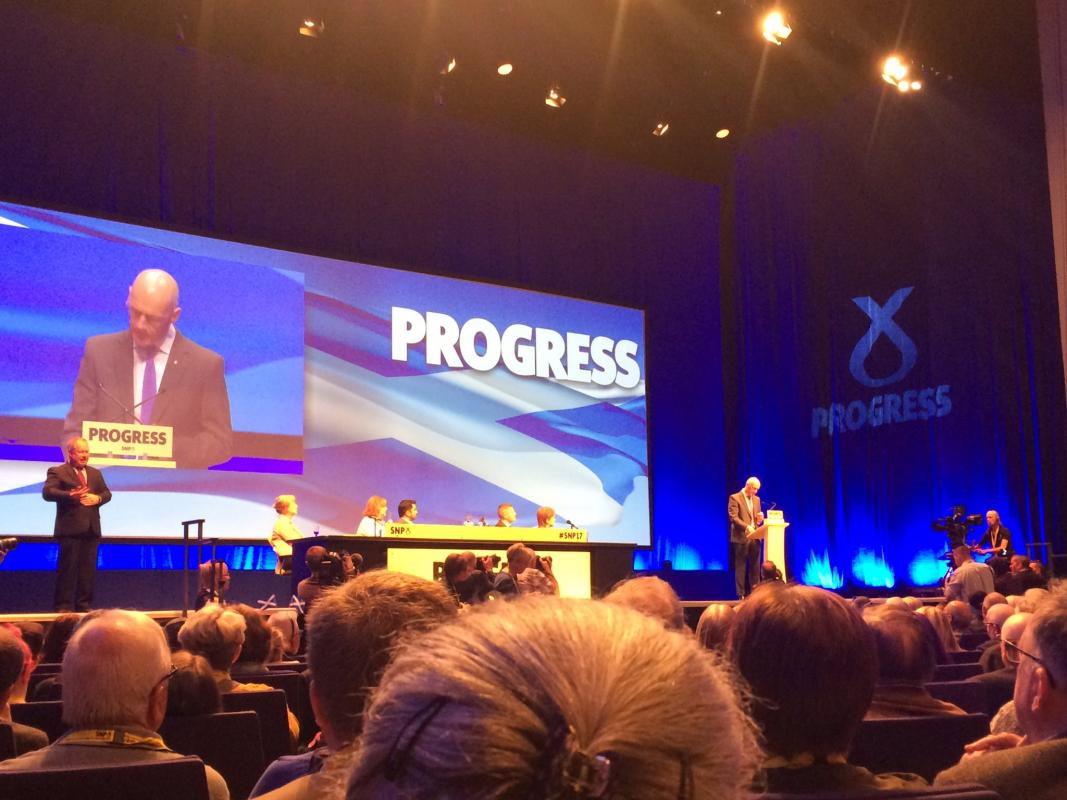 DEPUTY FIRST MINISTER JOHN SWINNEY has opened the SNP’s October conference in Glasgow with the announcement that bursaries of £20,000 per person will be offered to help make the transition into teaching, after acknowledging the challenges of giving up full-time work while completing teacher training.

Responding to frequent criticism from opposition parties and some education experts of the SNP’s education policy, Swinney reiterated the SNP’s commitment to reform and said: “We will have no truck with the deliberate misrepresentation of Scottish education.”

Swinney returned to the SNP’s pledge to combat inequality in education, a particular point of contention among the Scottish Government’s critics, pointing out that a record number of young Scots are leaving school for university, college or work, drawing particular attention to the 13 per cent rise in those from disadvantaged backgrounds entering university.

Swinney acknowledged the shortage of teachers in some areas in Scotland, and said that Science, Technology, Engineering and Mathematics (STEM) subjects were crucial to both pupils and the Scottish economy. He said efforts to recruit new teachers in these subjects will reach beyond recent graduates.

“We need to recruit more teachers in these subjects. And to do that, we need to reach beyond recent graduates and attract people who have the appropriate subject degree but are working in business or industry.

“These ‘career-changers’ still need to go through initial teacher education – we will never compromise on quality – but we can make it easier for them to make that career change.

“We understand that giving up a salary for a year while they do their teacher training is a real barrier for them.

“We have faith in our teaching profession and we are backing that faith with more power and more resources.” Deputy First Minister John Swinney

“I can therefore announce today that from next year we will offer bursaries of £20,000 per person to help these career changers make that change.

“Conference, we have faith in our teaching profession and we are backing that faith with more power and more resources.”

Swinney also drew a connection between the SNP’s past and its present, referring to the SNP’s first meeting at Glasgow’s Mitchell Library in 1934, and pointing to the victory of Susan Aitkin, the SNP leader of Glasgow City of Council, as the latest in a string of victories the SNP were widely predicted not to secure. Swinney said proudly: “Conference: the SNP leads the city of Glasgow.”

“We are a party that embraces diversity, celebrates our relationships with others, that extends a warm welcome to people of all backgrounds.” Deputy First Minister John Swinney

“We are truly the national party of Scotland,” said Swinney. “And what was the first decision that we took when we won control in Glasgow? It was to put forward our nominee to be Lord Provost.

“An individual to hold that great historic office. That symbol of the character and identity of this City.

“And we chose Eva. Not born here. Not raised here. But a fellow EU citizen who has made Scotland her home. And that says something profound about the SNP.

“We are a party that embraces diversity, celebrates our relationships with others, that extends a warm welcome to people of all backgrounds. Those are the actions of a truly inclusive national party.”

Swinney offered a circumspect but unapologetic response to recent polling indicating that the Scottish Parliament would lose its pro-independence majority in the next Holyrood election while retaining an SNP minority government.

Unpacking the themes promised in his speech’s subtitle, “Our Progressive Scotland”, Swinney made mention of what he considered the Scottish Government’s most progressive policies, including free university education, standing against any “creeping privatisation” of the NHS, the Scottish Government’s efforts to combat climate change and in particular, the recently announced ban of fracking, which Swinney called, to great applause, a “decision anchored in the national interest”.

Swinney also drew a contrast between what he characterised as the unity of the SNP with the various divisions and controversies that have beset its chief rivals.

“Scottish Labour has descended into infantile name-calling and the Tories have flirted with a cabinet coup against Theresa May,” Swinney said. “Labour and Tory are not so much locked in a battle for the future of this nation, but in a battle for who can break Twitter first.”

Describing the “stairheid rammy” of the Scottish Labour leadership race, Swinney argued: “Things are now so bizarre that I find myself agreeing – possibly for the first time ever – with Jackie Baillie.

“She was spot on when she labelled her Labour colleagues hypocrites who have betrayed the values of their party.

“My only question is, why did it take you so long to come to that conclusion Jackie?”

Regarding the Tories, Swinney said that he agreed with Prime Minister Theresa May when she told the most recent Conservative Party conference that “racism, intolerance and hatred has no place in British politics or British society”.

“The thing is though,” Swinney went on,”as we sit here today, racist and xenophobic councillors are still members of the Scottish Tory Party. So she doesn’t need to tell us.

“She needs to tell Ruth Davidson.”