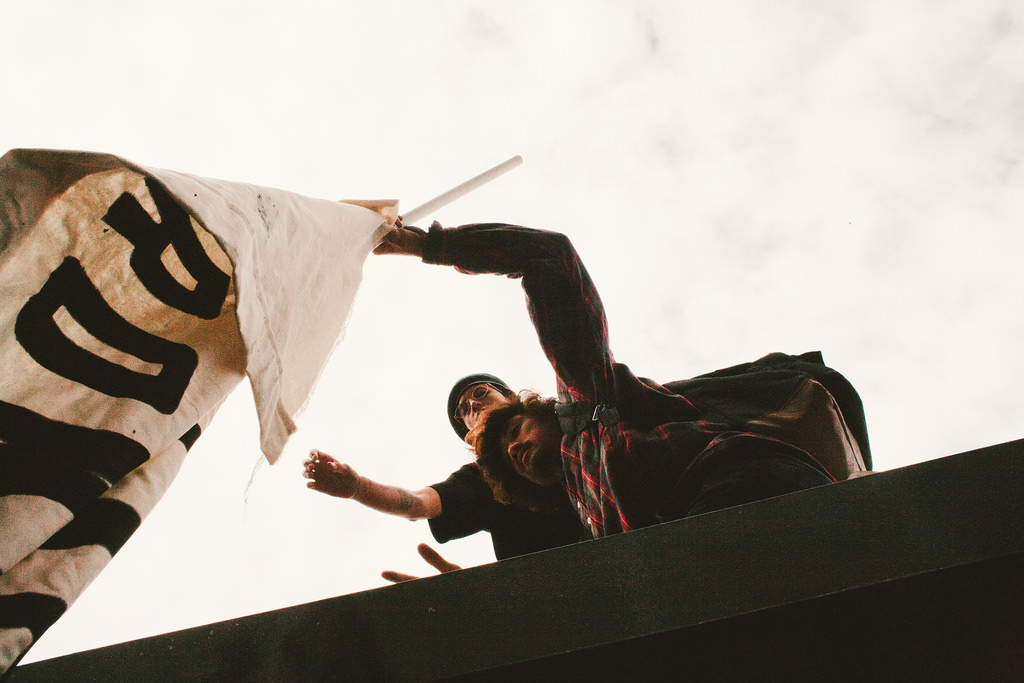 US PRESIDENT Donald Trump’s first day in office saw the largest demonstrations in the world since the 2003 global anti-Iraq War movement.

Millions of women in the US and all over the planet protested against Trump, whose campaign had seen him deploy misogynistic language and themes.

The women’s march was proceeded by massive demonstrations in US cities on the day of Trump’s inauguration, some of which resulted in clashes with far-right Trump supporters and police.

It is clear we are entering a new phase of social movements in response to the rise of Trump and a new global right.

But what can people do if they want to join this movement in Scotland?

For new activists (and old-hands re-energised by the new situation) CommonSpace provides an introduction to Scottish activism against racism, sexism, homophobia and exploitation.

Protest against the UK’s special relationship with Trump

What better way to show international solidarity than to protest against the UK Tory Government’s growing links with the new administration. There will be a protest outside the US consulate on Edinburgh on 11 February.

Donald Trump’s campaign for US president was marked by misogynistic comments and revelations he boasted about sexual assault. His administration is expected to involve attacks on women’s rights, and so far women have played the largest part in resistance to his government.

Scotland has many feminist and women’s right organisations, including:

Zero Tolerance: A broad campaign against men’s violence towards women.

Close the Gap: A campaign aimed at closing the continuing pay gap between men and women.

During his campaign, Trump notoriously called for the construction of a wall across the border with Mexico, and called for Muslims migrants to be barred from the country.

His election witnessed a spike in attacks on racial minorities.

Scots looking to drive back the new tide of xenophobia, represented in the UK by figures like Nigel Farage and Prime Minister Theresa May who want to use Brexit clamp down on immigration and immigrant rights, can get involved in these groups:

Unity centre: A Glasgow landmark – the Unity centre had helped to defend refugees from harassment and deportation.

The new Vice President, Mike Pence, has a record of regressive policy with regard to the LGBT+ community from his time as Governor of Indiana. Pence supported the ‘right’ of businesses to discriminate against LGBT+ people and has espoused agreement with the idea of therapies to ‘treat’ homosexuality.

Pence is just one of many radical conservatives in Trump’s movement and administration, and many in the LGBT+ community are gearing up for a fight.

Scotland has seen advances for the LGBT+ community in recent years, but there is much still to be done.

Tie campaign: The Time for inclusive education campaign has spent the last year and a half setting the agenda for LGBT+ rights in Scotland by campaign for education reforms to protect LGBT+ young people.

Stonewall Scotland: The longstanding organisation campaigning for an end to discrimination on the basis of sexuality.

Trump may have come to power making a pitch against free trade deals and the offshoring of jobs. But he is far from the candidate of the working class, and most US workers did not vote for him.

Many trade unions in the US are concerned about possible future clamp-downs on worker’s rights and about workplace discrimination.

In Scotland people are fighting to rebuild the trade union movement:

Better than Zero: A campaign against exploitation of young workers in Scotland’s booming service industry. They have won improvements in pay and conditions for young workers, particularly in bars, restaurants and nightclubs

Trump could only have achieved the momentum he did to win the presidency with the emergence of a new far right media scene. Websites like Breitbart and radio hosts like conspiracy theorist Alex Jones flooded the internet with hardline rhetoric throughout 2016.

The movement against Trump and the new right needs a media of its own. People can help Scottish new media sites like CommonSpace by writing for them, promoting them and providing information for stories.

But numerous new media websites across Scotland and the UK also needs funding. That’s why they have created The Media Fund, a pool of funding to sustain numerous projects and which donors can use to give to preferred sites.

Though Scotland has many national organisations, it is important for people in smaller towns and communities to be able to get involved in political activity.

A number of community initiatives have been established which opt for social solidarity beyond charity work, they include:

Unity Grill: A restaurant set to open in Ayr that will provide free meals to those struggling to afford food.

Castlemilk Against Austerity: Campaigns in Castlemilk in Glasgow against cuts and organises community solidarity for those in need.

Unite Community: The Community organising wing of the Unite union.