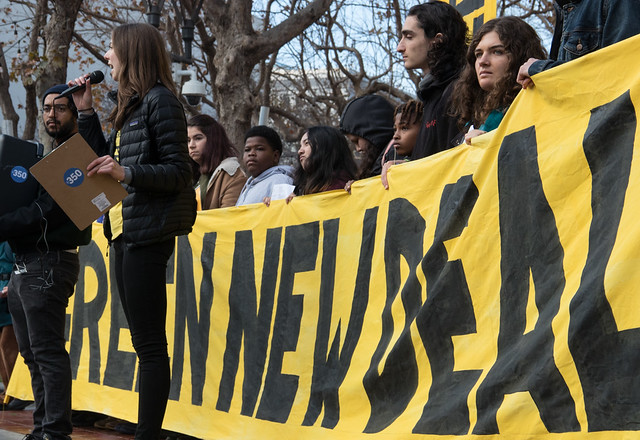 IT HAS been most welcome that the First Minister Nicola Sturgeon has put the challenge of climate change at the heart of the Scottish Government’s Programme For Government. And, it is welcome to see that the First Minister sees that this challenge is inter-connected with wider social and economic outcomes that encourage a fairer and more equal society.

Indeed, this is why the Green New Deal is an idea whose time has come. After decades of privatisation, financialisation, and exploitation of the world’s natural resources – it is time that we tackle all of these at once. Precisely because these problems are bound together by neoliberalism.

So what have we got from today’s proposals? Firstly, it is worth pointing out that the Scottish Government’s Green New Deal Proposals are at this stage embryonic. They require further detail, and we look forward to seeing this as it emerges.

As we know, time is already against us. And it is worth saying, that for a full implementation of a genuinely transformational Green New Deal, the full powers of independence would be required.

While we got some welcome announcements, such as a £500 million investment in low-emission buses, there was nothing in bringing public transport into public ownership, or for that matter reducing prices of trains and buses. Indeed, in order to fully realise a transition away from the motor car towards public transit systems with the capacity to deliver the transport we need, free public transport must be the aim. But we heard nothing on any of this.

Likewise, while deploying the resources of the Scottish National Investment Bank – a flagship Common Weal policy – in moving towards a net zero carbon emissions economy, there was no mention of publicly owned energy and construction companies. Common Weal has a full policy on developing an investment led economy that would work alongside the Scottish National Investment Bank and a Scottish National Infrastructure Company that would allow for the kind of economic planning necessary to confront both climate change, and the social ills that continue to scar Scotland in the form of poverty and inequality.

Sturgeon offered up lots of consultations and new targets, for instance decarbonisation of railways by 2035. We need greater haste if we are to truly lead the way on the climate emergency. It is the job of campaigners to ensure that politicians and governments accelerate plans to deal with the climate change challenge. But that is not all that matters. If it is to be sustainable and just, the transition itself must be managed in the interests of people and not profit.

On the one hand, the Scottish Government does stress the importance of the Just Transition Commission as a means to “create a more cohesive and resilient economy that improves the opportunities, life chances, and well being of every citizen in our country.” On the otherhand, it is of concern to see that the government is lining up a £3 billion “Green Investment Portfolio” which appears to be about selling off public assets to foreign investors. Equally concerning is the notion of a ‘Green Growth Accelerator” which feels like a bonanza for private companies to profit from the climate crisis at local authority level, rather than developing the kind of publicly controlled infrastructure that we need to see.

This kind of dogma, which assumes that marketisation is the only way of building the low-carbon economy, is the ideas of the SNP’s Growth Commission not of a Green New Deal, and is exactly the failed thinking that has created the multi-faceted crisis we find ourselves in today. The challenges of the 21st Century will require going well above and beyond the style of politics and economic thinking that was hegemonic pre-2008 crash.

So, while there is much to be welcomed in the First Minister’s proposals, there is far, far more to be done. Common Weal is working on a comprehensive, fully costed plan that would transform Scottish society for the better, by centring the needs of people above the mores of the corporate lobby. That plan will be a Green New Deal worth fighting for, and we hope the Scottish Government will engage seriously with it. Tinkering at the edges, without standing up to the oil corporations and the privateers, will neither protect people or planet.