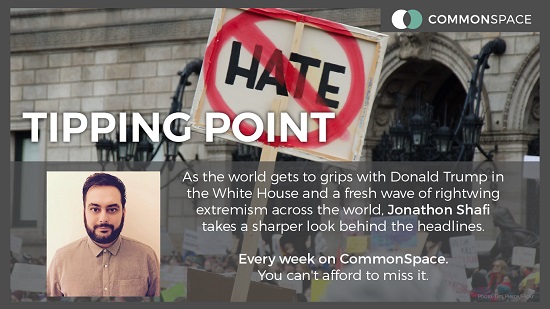 AS Scotland prepares for a second referendum amid Britain’s Brexit chaos, our constitutional question could have wider implications for the left.

The left is up against the rise of a populist right across the world, and all eyes are on Europe and America. Winning a leftwing case for an independent Scotland isn’t just good news for the people who live here, but it’s a boost for a bigger, international movement.

It’s going to take some hard work, but I know we can do it. Here are some key points to be thinking about as we start knuckling down for the next couple of years.

1.) This is not an ordinary crisis of the British State, and it is not disconnected from a longer process of decline

The UK Government faces multiple fronts all at once. That is what makes this moment unique. Previous major crises have been based on set piece stand offs: World War I, big class battles like the miners and the poll tax, and the 2014 Scottish independence referendum.

Now, the UK state faces three major constitutional crises: Europe, Scotland and Northern Ireland. Overlapping this is the continuing fallout of the 2008 financial crash. Britain is on the verge of a massive social crisis. Trust in institutions of the state and the economy is disintegrating.

In a desperate bid to develop social glue, the state is building national identity into its daily operation, backed by a rabid rightwing press. The neoliberal consensus is over. You are watching the end of Britain – not its Renaissance as the Tory cabinet and Nigel Farage believe.

2.) The twilight union is part of a broader international crossroads

The election of Donald Trump is a game changer. It represents a deep crisis at the highest levels of the American state and the apex of white nationalist and rightwing populist power in the world.

Despite this the special relationship between Britain and America is tightening between elites in the White House and the Tory Cabinet. May is joined by an economic, social and political umbilical chord to Trump.

They are attempting to build a new axis of power based on old school colonialism and the worst forms of rightwing chauvinism. Across Europe the populist right and fascist movements have emerged as forms of ‘resistance’ to capitalist decay.
Scottish independence can be a repudiation of this – in geopolitical terms a victory for the British state at this juncture would be a disaster. That means we need a new foreign policy, and a radical approach to the causes of Trumpism, not just rhetorical opposition.

3. Scotland is not a lifeboat – we must be prepared for stormy seas

The politics of the 1990s is not coming back – ever. Independence in itself is not the answer. Living standards are in steep decline and the next financial crisis is going to overlap on deep political discord and polarisation. The centre ground of politics can’t hold.

The coming mass movement must develop a new working class internationalism that can rebuild solidarity and push back the technocrats and the far-right. We must have a vision that can bring a new social order into view – one that ends hunger and poverty and is not subordinate to the global one per cent.

This movement is not about jumping off a ship, on to a dingy and then into the rocks. It has to take control and chart a new course.

4. Membership of the EU will not be enough to lure a majority for independence

The coming referendum has been triggered by Brexit, and the SNP has followed its 2016 Holyrood manifesto to the letter. There is a clear democratic mandate for Nicola Sturgeon to call for a new referendum.

But it is about so much more than EU. It is about democracy. And yet it is about even more than that. Britain is heading in a disastrous direction for anyone other than the super-rich. People in every part of the UK are suffering: by 2021 most people will have had no wage rise for 15 years, while housing, energy and food costs continue to rise.

Perpetual Tory rule from Westminster threatens a Dickensian nightmare. This reality must be made clear to everyone in Scotland during this referendum and, more so, a vision for an alternative must be front and centre. This, not the EU, will raise the majority we need.

5. Don’t take the Yes voting areas of 2014 for granted – the boardrooms won’t win this

There is a common sense approach that says: ‘Yes voting areas are in the bag – we need to convert more wealthy no voters this time round.’

This is wrong on two levels. Firstly, don’t for a second imagine that areas that voted Yes last time will do this same next time. This will only happen if there is a transformational agenda, and a mass movement from below. The SNP is obviously a big and very popular party – but it takes the working class of Scotland for granted at their peril.

Unfortunately the domestic agenda has not been radical enough – keeping the council tax is one example of this, wealth redistribution is another. That means the levels of enthusiasm in many areas are not what they could be.

On the other hand, by diverting resources to woo wealthy No voters, the message of change could be undermined by the message of continuity. Last time where we won Yes, we did so by very slim margins in many places. Where No won they won by larger margins. The task this time is in part to increase Yes majorities where we have already won. Groups like the Radical Independence Campaign (RIC) can play a key role in this task.

6. We need new forces, new voices and a people’s movement

To win we can’t simply repeat what we did in 2014. We need new ideas, new methods and new voices. We have to show that we understand the political terrain has changed, and we have to look like we are a movement which has grown – not stagnated.

We need to see a great wave of innovation and originality from the grassroots. We need to turbo-charge that sense of a people’s movement we had a few years ago. Let us not be containable – let us follow our own lead. No one party will win this – it’s going to take a genuinely popular movement of movements. Don’t ask for permission to act.

There has been a lot of talk about keeping the debate civil. Now – that’s laudable. My view is always: be radical, be polarising – but engage with respect. In the end that is what helps persuade people of your ideas.

But the strongest card the defenders of the British State have is to sully the debate so badly that it puts people off. We are on day two and already the Telegraph has carried a column with the headline ‘Off with her head’ in relation to Nicola Sturgeon.

This is the soft end of what is to come. The answer? The same one mass movements have always had – to ensure that alongside direct political interventions we develop festivals, comedy, cultural events and music. These are vital to morale and solidarity – and the are the best answer to dirty tricks and media threats.

8. There are struggles happening now that socialists, the radical left and trade unionists need to work together on

There are strikes, campaigns against cuts, anti-racism marches and a host of other progressive movements which do not have independence at the centre. Indeed there are many socialists and left wingers who are not convinced by independence. Should this be a barrier to working together on other issues? No.
We need maximum unity despite disagreeing on the national question. Because whatever happens, we need to build a strong radical left not just in the next two years but the next 10. We need to link arms on picket lines and on the streets against racism. We need to have forums of discussion. We need not to look at each other as enemies when the referendum concludes or during it.

9. We do not yet have a referendum

While Nicola Sturgeon has called for one, the Tories are still considering their response. It is highly unlikely that they will grant one on the terms outlined – between Autumn 2018 and Spring 2019. There will be wrangling about time – at least.

They may even decide to block the whole thing from happening in this parliamentary term. Most commentators think that strategy is too much of a gamble. But remember – there really is no rule book anymore. We are in uncharted territory. Should it be needed, the whole movement will have to mobilise in defence of democracy – not just in speeches and newspaper columns – but in the streets.

10. The Tories and Toryism: a stand off

Only one party benefits from a No vote – the Tories, both in Scotland and at Westminster. Dugdale’s Labour are already collapsing behind the Tories, and are a much diminished force even from 2014.

The political leadership of No is the Conservative Party. If you are not yet energised – think through the real life consequences of a No vote. It will be seen as the moment in which the British establishment is brought back from the brink. It will be seen as a victory for Ruth Davidson. It will kill independence, and with it the independence parties will suffer huge demoralisation.

Every Tory in Scotland will see an opportunity in the next Holyrood elections as a real opportunity. The radical right will tour the TV studios making the claim that their politics has won the peace. The consequences will be much, much worse than in 2014.

But all of this is also a massive opportunity to expose the Tories and their policies. We can put Toryism as an ideology under the spotlight and use that popular understanding to build opposition to it in an independent Scotland, while at the same time forcing Theresa May to resign and causing the Tory party to enter an even more intense period of in-fighting.

That would only help the English left. So get ready to fight like never before. 2014 already looks like a picnic.