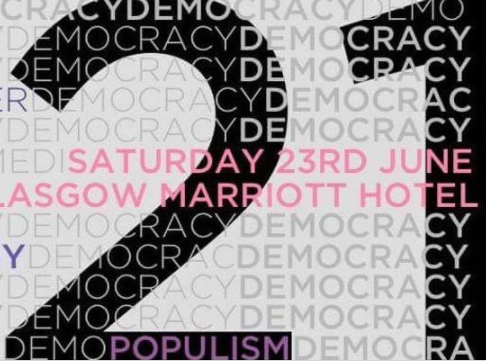 LEVELS of local representation in Scotland are the lowest in Europe – leaving many feeling powerless. But now campaigners are hoping to change that.

Back in 2016, research for Electoral Reform Society Scotland revealed 76 percent of Scots felt they had no or very little influence on council spending or services. This shocking reflection of disempowerment inspired campaigners to launch the ‘Our Democracy’ campaign.

Since then, it has brought together thousands of local people – with the aim of taking power into our own hands.

In October, examples of Scottish communities already getting organised for change were celebrated at ‘Amplify’ – the first of a three-part series of events.

READ MORE: Grassroots need to have a say in local democracy reform, campaigners argue ahead of ‘Our Democracy’ event

And at the start of this year Our Democracy campaigners, in conjunction with the Coalfields Regeneration Trust, facilitated six deliberative events in small communities where citizens were encouraged to ‘Act As If’ they own the place, and to decide on their local priorities.

The focus was on nurturing an atmosphere of collective thinking in which all views are respected and given space.

What these events revealed is that Scotland is already buzzing with projects and success stories. But we don’t shout about them enough. Nor do we have a network linking them together.

With this in mind, the second event in the series, ‘Impact’, showcased some of the best work already being done and saw campaigners discuss how people can come together to give communities the power they need to take decisions locally.

Attendees also began work on drafting a Declaration on Local Democracy – proposed reforms which we are calling to be included in the Scottish Government’s Local Democracy Bill. The legislation is expected to make its way through Parliament later this year.

This is a big step in the campaign. It’s about taking what we have learnt and ensuring that we deliver lasting structural change that will let our local communities take power.

The Declaration will be launched at the final event in the series: ‘Democracy 21’. This is the culmination of two years of work bringing communities together to look at how we can build local democracy for the 21st century in Scotland.

It is set to be a major conference with attendees, community activists and high-profile speakers from across Scotland, looking at how to create truly ‘local’ and democratic decision-making. And to put pressure on Holyrood to listen.

It is our belief that communities work better when they are engaged and empowered to allow citizens to decide how they run.

The purpose of the event is to bring people together to think about the challenges for democracy in the current political, social, and technological context. And, to collectively evolve our current thinking, institutions and practice of democracy.

We will have workshops and discussions on:

We will also launch a declaration that will shape the Local Democracy Bill, developed by and for community activists to advance an ambitious local government reform agenda.

READ MORE – Willie Sullivan: It’s time we acted as if we own the place, and here’s how we can do it

If all that wasn’t enough, we have some incredible speakers lined up including:

To register for the Democracy21 conference visit the eventbrite page here.