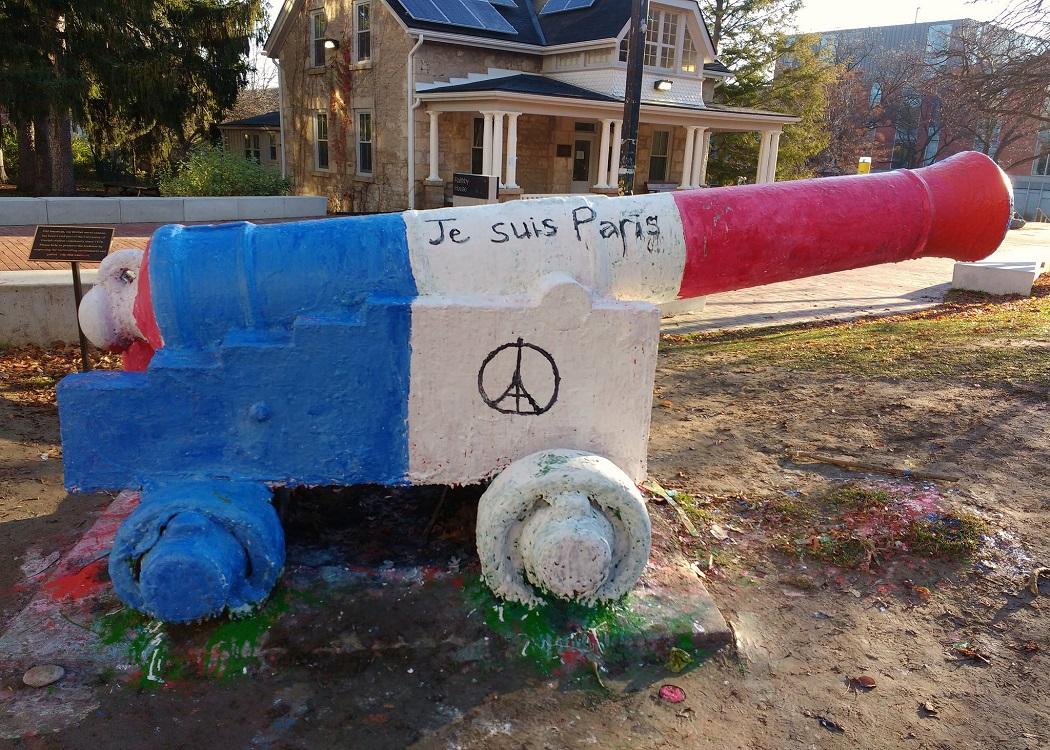 I’M sat in a bar as I’m writing this, and across from me a group of men are discussing the recent attacks in Paris.

They’re emphasising how disgusted they are. I’ve only been here for 10 minutes and I’ve already heard how they think that this “terrorist crap” is getting to a point where “enough is enough”.

According to them, we should be intervening and stepping up our military operations to “wipe the bastards out before they attack us”.

Over the past few months, the US-backed Saudi-led coalition have repeatedly bombed Yemen: two wedding congregations have found their day of celebration turned into a picture of massacre.

I’m pretty sure that similar conversations will be happening in other bars, restaurants and households across the country. This mentality is not uncommon – in fact, among the general public, it seems to me to be prevailing.

Considering the content and tone of this piece, it’s uncanny that I’ve overheard this conversation as I try to put down my thoughts. It highlights exactly what I’ve sat down to discuss – the Western bias and selective humanity that rears its ugly head every time there is an attack close to home.

I’m going to preface the rest of this article by highlighting that the events that unfolded this weekend in Paris were horrific, callous and unjustifiable – there are no two ways about it.

So too were the bombings in Beirut last Thursday, which left at least 41 dead and an estimated 230 injured. Yet, our prime minister did not rush to condemn the actions – President Obama did not address the world’s media and offer his support to the Lebanese, and social media did not explode with exclamations of sorrow and heartfelt tweets: the whole of Facebook did not suddenly change their profile pictures in a show of solidarity.

The US-led air strikes in Syria have claimed over 450 civilian deaths. Palestinians are being butchered daily. Isis is running amok in the Middle East.

Over the past few months, the US-backed Saudi-led coalition have repeatedly bombed Yemen: two wedding congregations have found their day of celebration turned into a picture of massacre as bombs dropped around them, killing 178.

The US-led air strikes in Syria have claimed over 450 civilian deaths. Palestinians are being butchered daily. Isis is running amok in the Middle East. Innocents are being slaughtered in Nigeria at the hands of Boko Haram. So why is it that we only seem to care as a nation when tragedies happen close to us?

It’s because, whether we like to acknowledge it or not, we – in the West – continually place a hierarchy on the value of human life. We are biased towards “our own”.

We are selective in our shows of humanity, and we are hypocrites: we denounce the actions and barbarism of extremist acts of terror, yet turn a blind eye to the atrocities that our own government and its felonious allies are enacting across the globe.

Let’s not forget that they are ultimately responsible for this action/reaction cycle that we are currently faced with. By refusing to acknowledge and condemn the savage operations of our own decision makers we are simply paying lip service to privileged parts of the global community if and when the mainstream media and dominant discourse tells us to. Too often, we forget one very simple truth: no human life is worth more than another.

Innocents are being slaughtered in Nigeria at the hands of Boko Haram. So why is it that we only seem to care as a nation when tragedies happen close to us?

Innocent lives are being claimed on all fronts and in all conflicts that are ongoing. When the West engages in air strikes or acts of warfare that result in civilian casualties, it’s collateral damage. When the tables are turned, it’s terrorism.

For ministers and government officials to address press conferences and proclaim their outrage and upset at this weekend’s events while approving their own collective acts of monumental violence is stinking hypocrisy.

There is a purposely driven agenda of mass conditioning taking place; it’s been happening right under our noses and we’re falling for it. Our media is complicit in extracting our innate humanity when it fits the bill, while desensitising us to the violence and horror that is a reality for so many across the globe.

We’re immune – until it hits home. The scenes that we saw in Paris this weekend are a constant reality for those living within the regions that our governments are actively destroying.

The sanctimonious imperialist attitude that plagues our nation is all too prevalent in times like this. The response from our government and decision makers will fall predictably in line with what has come before.

There’ll be the imminent calls for increasing military operations: meaning more airstrikes, more bombs, more bloodshed. The far right and conservative demagogues will use the attacks to inflame Islamophobia and increase national fear of the other: already, some are ridiculously pinning blame on those who settled within Europe following the recent refugee crisis.

Whether we like to acknowledge it or not, we – in the West – continually place a hierarchy on the value of human life. We are biased towards “our own”.

Theresa May and her cronies will begin to spout rhetoric regarding homeland security and civilian safety, citing the attacks as further proof that the government has to expand its surveillance outlet and violate our privacy even more, and we’ll sit back and watch as our rights are increasingly eroded.

Of course, peaceful Muslims will be subject to further intolerance, bigotry and abuse as they are demonised by the press and influence figures. And, in the end, we won’t learn any lessons.

To be empathetic towards the Parisians affected this weekend but remain silent and detached when it comes to other acts of brutal destructiveness is not good enough. We’re skipping down an awfully insular road when we allow ourselves to be selective in our humanity.

My question to the men across from me, and to all of those who share such views, would be this: why do we only reach a point whereby “enough is enough” when it begins to affect us?