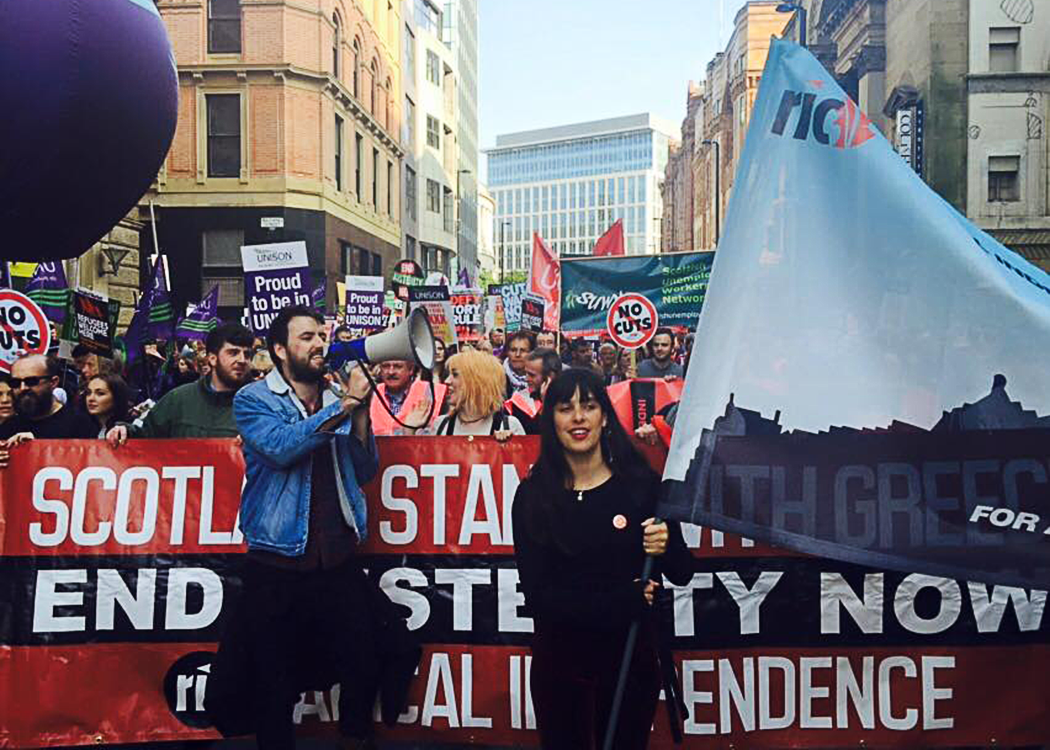 WELL, that’s the election out of the way. It’s interesting, because what was essentially quite a dull and uninspiring campaign (my personal highlight, for example, was Willie Rennie’s encounter with the volcano slide) has certainly given us an awful lot to consider with it’s conclusion.

Everyone is surprised that the SNP failed to win a majority in a system built to prevent a majority, the Greens didn’t quite hit the double figure outcome that they expected, Scottish Labour has all but disintegrated, the radical left was vehemently rejected and the Tories are the second party. Yes, the Tories had a fantastic outcome – in Scotland.

In our first parliamentary election following the referendum, one thing is true: the political ethos of our country is dominated by independence, and will continue to be until it is achieved. We live in a pluralistic, post-political situation: the constitutional question will continue to act as the deciding factor for voters as they take to the polling stations for as long as Scotland remains part of the UK.

We have to regenerate the Yes campaign, with all of its wonderful grassroots elements.

So, perhaps as we move forward, we all have to accept this. For me, it seems that the Yes movement has become a little bit too inward and now exists within it’s own little bubble, forgetting about the fact that there are still a considerable number of people out there who do not want to see an independent Scotland. That was emphasised very clearly by Friday morning. However, we also seem to have forgotten that there is a constituency of voters who can be convinced, voters who are looking for answers.

My own tuppence worth here is that I reckon we have to regenerate the Yes campaign, with all of its wonderful grassroots elements. I know that a few people have been hinting at this for quite a while , but it is now clearer than ever – if we don’t want the Tories to continue generating the support of loose No voters who can otherwise be convinced; if we don’t want a political system that is continually dominated by a single issue; if we don’t want to see ineffective governance and constant rhetorical point scoring over the constitutional question, then we need to get back out onto the doorsteps.

We need to start canvassing again. We need to answer those questions that were left unanswered in 2014: the currency, the economy, the monarchy, the banking system, the oil.

Before I move on: for the sake of clarity and to avoid confusion, when I’m talking of ‘the left’ here, I don’t mean the pseudo-left vision that many believe the SNP offers, rather – the actual left. The radicals. The socialists. The anti-capitalists.

We need to start canvassing again. We need to answer those questions that were left unanswered in 2014: the currency, the economy, the monarchy, the banking system, the oil.

While many of these people have grouped within the SNP – and they do exist, particularly the young members – my reference starts and stops with those who chose to operate externally of the SNP’s party structures.

I’d argue that the left has a particularly important role to play in a rejuvenated Yes movement. The SNP’s hegemony within the parliamentary system cannot translate into the next referendum campaign. This is where the left has to decide which path it’s going to walk down. It has to be acknowledged that this election was particularly worrying for the prospects of an electorally represented radical voice.

Now, it’s not that Scotland isn’t ready for the left, it’s that Scotland doesn’t want the left at the moment. It wants independence, or it doesn’t – and, again, we have to recognise how a left insurgence should operate within that.

Consider this: even when all of the votes – from all of the socialist parties and from all of the regions – are accumulated in a national context: there’s still only enough for one radical left MSP, or, at a push – two. Now, if that is not a very clear indication that the Scottish left’s electoral quest is proving frivolous, then I don’t know what is.

The SNP’s hegemony within the parliamentary system cannot translate into the next referendum campaign. This is where the left has to decide which path it’s going to walk down.

Because, no, this election wasn’t a victory. It doesn’t matter how much you convince yourself that engaging with parliamentary electoralism is the best way forward in this current dichotomy of independence and unionism: as a still split, still fractured, still underground subset – and operating on it’s current tactics – the left won’t get anywhere.

Here’s where I’ll be controversial – bearing in mind, I could be wrong and I am certainly happy to have a chat about this – but I don’t think that the left is going to find any parliamentary success until we are living in an independent Scotland.

I’m not suggesting that the left should give up on electoralism, but they certainly have to realise that we live within a particular hegemony that is hard to break, and is only likely to soften post-independence.

The left’s strategy right now is patchy at best; throwing eggs at the SNP didn’t work in this election and, like the Greens, they failed to capture and energise that constituency of disillusioned, disenfranchised voters who did not turn out last week – people who bought into Yes, but not into #sp16.

So where’s the disconnect? I can only assume that it lies with the party political system. Yes managed to penetrate the layers of traditional partisan politics – it offered a vision, an idea: another politics was possible. Another Scotland was possible. This was undoubtedly the result of the Scottish left’s role during the referendum campaign. Yet, this election did not harness that same hopeful energy – for many people, there was no real reason to vote.

Here’s where I’ll be controversial – I don’t think that the left is going to find any parliamentary success until we are living in an independent Scotland.

I’m writing this on my work break, and I have spent the entire afternoon talking to people about the election. I’ll tell you one thing: I am surprised at the amount of young people in here who didn’t bother voting. Yes voters, as well. The general theme seems to be: “I’d vote Yes again, but I didn’t vote last week. What’s going to change? They’re all the same.”

That is where the left failed in this election. Unfortunately, as much as I wish I could get behind a leftwing electoral mission, I’m not entirely convinced that the tactical strategy for the left at this moment involves Holyrood. Councils, yes. Europe? Maybe, but don’t be too optimistic.

I’d suggest that radical activists lose sight, for now, of Holyrood – and spend the next few years investing energy in reinvigorating the Yes campaign. It worked wonders between 2012-2014, but I think most of us would generally agree that it kind of seems like the vibrancy of that time period has been hoovered up and diluted by the SNP, which isn’t necessarily a roadblock, but it’s something worth considering.

The left has to ditch the placards and pick up the clipboards. Spend time getting active within RIC again. Get teams of people back out on the streets and start canvassing. Did you vote Yes last time? What would you vote next time? What questions do you still have?

As much as I wish I could get behind a leftwing electoral mission, I’m not entirely convinced that the tactical strategy for the left at this moment involves Holyrood.

Start discussing the potential of an independent Scotland on the doorsteps, find out what the lay of the land is and convince those who did not buy into the idea before. Because, clearly, there are many who did not change their mind – and we forgot about those people.

After 2014, we simply stopped talking about it – and the makeup of our current parliament is a result of that – if we don’t want to see this repeated, then we have to start getting people on side.

Everyone is constantly floating the idea that as soon as Yes is consistently polling at around 65 per cent or so, then we should go for it again. How exactly do we plan to push the numbers up there and attract more support if we don’t actively attempt to build it?

By all means build an electoral left at the same time – a force that is ready to strike at the right moment. Although, this requires serious organisation and a strong strategic outlook – something that I think has been lacking during this election, for various reasons.

Take some time to consider the best approach. If you’re dead set on electoral representation before independence, then recognise that the tactical operations that were deployed this time around are perhaps not the best way to build a network of electoral support that captures the disenfranchised.

The left has to ditch the placards and pick up the clipboards. Spend time getting active within RIC again. Get teams of people back out on the streets and start canvassing.

Honestly, though, I’d recommend getting straight back into the Yes frame of mind and pushing to get the constitutional question out of the way. Until then, the left will be hammered with each election – and, with every battering that they take at the ballot box, their credibility sinks.

This revitalised Yes campaign, of course, involves the SNP too. It is quite encouraging to see Sturgeon talking about kick-starting something again, but we really need to be careful that a new campaign is not party aligned. If it had been left to the SNP the last time, I highly doubt that we’d have pulled 45 per cent of the vote.

We’d be looking at a form of neoliberal independence for the sake of it. We’d be pandering to big business and the rhetoric of social justice would be absent. So, there has to be a general consensus among Yes activists – both partisan and non-partisan – about which Scotland it is that we want to see.

We don’t have to agree on everything, but the foundations have to be there – if we aren’t sure of what an independent Scotland will look like, how can we convince others? The menu has to be different this time. As aforementioned, we have to address those unanswered questions from 2014. We need to have a more solid, robust and well thought out plan.

As for the next five years in Holyrood? Well, it’s not too awful. I’d predict that the large Tory presence will push pretty much every other party in Holyrood a little bit further to the left.

The SNP will need to be careful not to be seen to be co-operating with, or agreeing with, the Tories. The Greens will play a considerably powerful role in holding the SNP to account on key issues such as fracking and land reform.

It will be interesting to see if there will be a Green presence in the cabinet – I’d strongly expect that to be the case. As for Scottish Labour – they’re faced with one very simple choice: get aboard the independence train, or hang up the red rosettes.

Since 2014, Scottish politics has been defined by unprecedented and unusual twists and turns. The outcome of this election was certainly no different. One thing is clear: we need an active, organised, left-infused Yes movement operating externally of parliamentary structures.

I’m firm in that we need to start talking about independence again, properly, if we ever want to see a new politics. Let’s start having those conversations now.