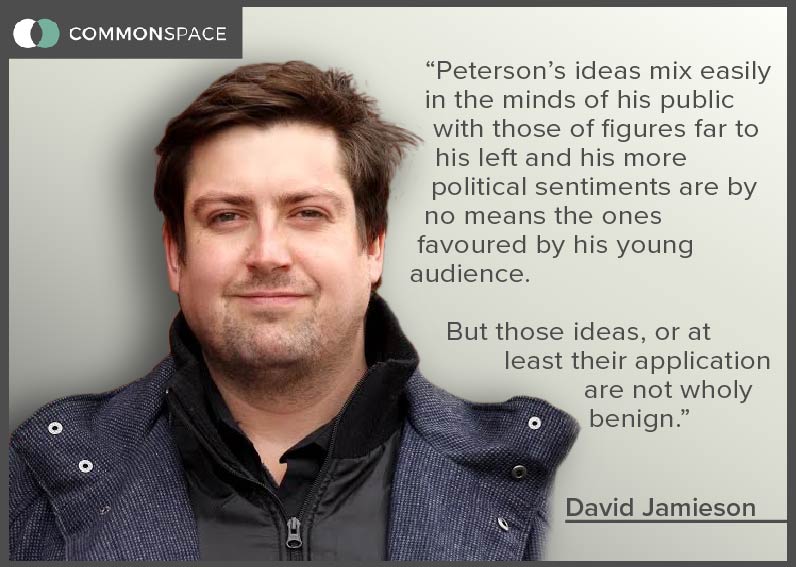 David Jamieson, beginning a new column on CommonSpace looking at culture and ideology in modern Scotland, tours Scottish Jordan Petersonism, to examine how ideas of the new right are influencing young male subcultures

THE new political polarisation of our times has brought a new subcultural dynamic, and new ideologues to act as its lynchpin.

In the demented maelstrom of online global subcultures, it can be difficult to trace the threads connecting ideology and its epiphenomena, but between Canada and Scotland such a link can indeed be identified.

At Toronto University in September 2016, pyschology Professor Jordan Peterson came to prominence by stating he may refuse the preferred gender pronouns of students and staff members at his work, something he said changes in Canadian law compelled him to adhere to.

Well over three thousand miles away self-styled comedian Mark Meechan was fined £800 at Airdrie Sheriff Court this week for sharing a video online which featured him saying “gas the Jews” to provoke a trained nazi salute from his girlfriend’s pug.

What on the surface connects these two incidents is a debate over free speech and what goes for the accepted plurality of ideas in contemporary Scottish society, but Peterson and Meecham’s martyrdom are the opportunities for polemic for a new right which now has significant cultural resonance.

“As I discovered in my brief tour of Scottish Petersonism, the man’s bric-a-brac of ideas are a cipher for various perspectives on matters from society to self improvement.”

As the new Glasgow University student publication, the Medusa Review, has argued, this new dynamic has elevated Peterson, an unlikely charismatic, to become the fascination of a sub-section of young men through his Youtube channel, occupying a space once taken up by the ideas of the left:

“…just look at where this so-called transphobe is now. At the top of the Amazon bestseller list and respectfully treated by most interviewers, Peterson has achieved the kind of popular eminence amongst young people that, in the past, people like Chomsky, Hitchens or – for a while in this country at least – Galloway enjoyed.”

The magazine itself, which didn’t want to co-operate with this article, quickly fell victim to its own manufactured culture battle, after its first edition featured a short story in which a woman is raped and killed.

As I discovered in my brief tour of Scottish Petersonism, the man’s bric-a-brac of ideas are a cipher for various perspectives on matters from society to self improvement. But two broad tendencies did emerge; that shy, indeed semi-anonymous element for whom Peterson’s theories provide a more overtly political programme and another tendency who were satisfied to read what they wanted and had become jaded by what they saw as attempts to narrow public debate.

READ MORE – Mick Clocherty: Why there’s not too much sympathy for ‘Count Dankula’ in Glasgow’s comedy scene

For the first element, all of whom declined to be identified for this article, most cited “gender” as their reason for interest in him. It transpired that this actually meant his views on a whole range of issues, from debates around transgender identities to the arguments of the feminist movement. Those who watched his videos or read his book ’12 Rules for life – an antidote to chaos’ – a self-help manual, apparently for unfulfilled young men – felt confident that he had either comprehensively debunked or at least severely challenged established feminist critiques of gender inequality, though their own elucidations of Peterson’s ideas often seemed confused or unsure.

Peterson is in some senses a triumph of style over substance. His trick is to speak in a metronome style, constancy of message and plain delivery giving the impression of sure knowledge. Dubious statistics are added liberally and sometimes contradicted.

Much of this content is familiar. Women and men are hormonally and physiologically different, and they reflect different evolutionary trajectories. This is manifested in their different social roles and, consequently, in social inequality.

Peterson’s arguments are, in fact, the cliché of pop-culture references to lonely teenage boys pouring over Nietzsche, Darwin or Freud in existential angst. For some of his followers, Peterson’s mix of pop-evolutionary psychology, reverse gender studies and appeals to the ‘reason’ of a somewhat mangled European Enlightenment provide them with the proof they always needed that demands for equality are misguided.

“Less determined for the doyen to mean anything in particular, this class of precocious young men are presumably more representative of the sorts of people once attracted to leftwing thinkers and movements.”

But then there is my second group of Peterson enthusiasts. Less determined for the doyen to mean anything in particular, this class of precocious young men are presumably more representative of the sorts of people once attracted to leftwing thinkers and movements.

One of them is 19 year old Stirling university philosophy and politics student Nathan, who professed not even to know very much about Peterson’s ideas regarding feminism or gender:

“I think he has contributed lots of ideas towards how we should view ourselves as individuals and as a society. I think his detailed analysis of left wing thought has been very interesting to me and the problems that we can face through identity politics and Cultural Marxism.”

“I don’t think his ideas are meant to be as a contrast to leftwing ideas but rather showing the problems with leftwing thought in today’s society. Personally his ideas are something that strike a cord with me in terms of individualism and responsibility as a young man. This in turn can reflect onto attitudes towards politics and academia.”

Indeed, in common with some other people I met and who took an interest in Peterson’s work, Nathan was also interested in leftwing thinkers including Chomsky.

Overall, he felt that politics was changing and moving away from traditional forms of left and right, and was dismissive of people who might try to channel his readings and explorations.

“Peterson is one of an emerging cast of figures who appeal to people who have found themselves on the receiving end of criticism from the left on social media.” Darren ‘Loki’ McGarvey

For Scottish writer and rapper Darren ‘Loki’ McGarvey, this mood of free-wheeling intellectual curiosity is key to Peterson’s appeal.

“Peterson is one of an emerging cast of figures who appeal to people who have found themselves on the receiving end of criticism from the left on social media. On the left, many issues come with precepts attached. But the average person tends to stumble across these issues largely unaware of all the pre-established ideological fault lines.”

Loki, whose forthcoming Edinburgh Festival Fringe show will deal with some of the issues wrought by the culture wars and the alienation of young men, also thinks that a generational disjuncture may have promoted the phenomenon:

“It’s not that every man who follows Peterson does not care about social justice, it’s just that issues of freedom of speech and the free expression of ideas is higher on their moral matrix.

“An unfortunate aspect of the ideological primacy of social justice in Western discourse is that it’s implicit in a lot of the activism that white men are inherently privileged, but many of those men find that idea hard to reconcile with their own experience.”

Of course, there are two sides to any culture war. Loki’s reference to “social justice” is to a profusion of new movements in recent years focusing on issues sometimes dismissed as ‘identitarian’ – focused on the inequalities experienced by women, the LGBT community and minority ethnic and religious groups. Up to a certain point, the cast Loki refers to are a response to movements from Black Lives Matter to MeToo.

Naturally for a global (or at least western) phenomenon, Scotland is not immune. The country’s political developments seem frozen by the constitutional impasse, but they are frozen in what seems a strong position for the left. Scotland has no fewer than three big-tent centre to left parties, the SNP, Labour and the Greens, who between them dominate the parliament.

The Scottish Tories and their coalition of hardline unionist supporters deal mainly in a tired mode of small c conservatism, when they talk about politics at all beyond constitutional affairs.

For some in the quieter and more committed group of Peterson supporters, the search is on for a transgressive right – one that seeks to break with the norms of a modern society in some way captured by “Cultural Marxism” (or as Peterson himself refers to it “post-modern Neo-Marxism”).

The rhetoric is a little stretched. None of the institutions responsible for the censoring of Peterson or Meecham are institutions of the left. The police forces, court systems and legislatures of the Canadian and British states are absent ‘Marxism’ of any kind.

Regardless, the right has established a certain zone of influence with these ideas, including in Scotland around the Meechan case (the aforementioned ideological ambiguity of this subculture notwithstanding). How has the left ceded the territory of some of the young and alienated?

“The interesting difference between [Peterson] and the traditional alt-right is that he doesn’t just rage and blame feminism for the problems faced by young men but he offers a self-help path for them to move forwards.” Jenny Morrison

Jenny Morrison, a feminist author and academic researching women and social movements, cautions that frustration directed at the left doesn’t change material realities. Men still hold the bulk of political and economic power in society; they still dominate the left itself. The argument that the left and feminism in particular are “puritanical, stuffy” is an old rightwing trope, and is not a fresh product of the new culture wars, or people like Peterson and his admirers.

“What may have some basis is that there has been something of a ‘retreat from class’ over the past few decades, class discussed in cultural terms rather than economic terms, and some parts of the left are too middle class, centred around universities and so forth. Building a solid class politics will take time but would appeal to working class people, including those who happen to be white men, but in a way that doesn’t prioritise white men,” Morrison says.

Morrison adds that Peterson has to be understood in two facets, one ideological but another industrial.

“Relating to Peterson specifically, the interesting difference between him and the traditional alt-right is that he doesn’t just rage and blame feminism for the problems faced by young men but he offers a self-help path for them to move forwards.

“The self-help industry is massive, and pulls on ideas of individualism and self-responsibility, but has often been coded quite ‘feminine’. Peterson seems to be capitalising on the less tapped into male market.”

“His ideas mix easily in the minds of his public with those of figures far to his left, and his more political sentiments are by no means the ones favoured by his young audience.”

This brief survey of Peterson and the new right’s appeal to young men in Scotland has highlighted some profound ambiguities, which no doubt exist everywhere in the Western world. Peterson’s followers are by no means the ogres one might expect from glancing at his social media following. His ideas mix easily in the minds of his public with those of figures far to his left, and his more political sentiments are by no means the ones favoured by his young audience.

But those ideas, or at least their applications, are not wholly benign. Some of those who didn’t want to discuss Peterson’s views presumably self-censor out of a belief that their own ideas are better not subjected to a public hearing. At least, not yet.

But there remains an open question as to how the left can regain the territory it once monopolised, as a force of cultural and moral radicalism, which breaks rather than builds taboos.