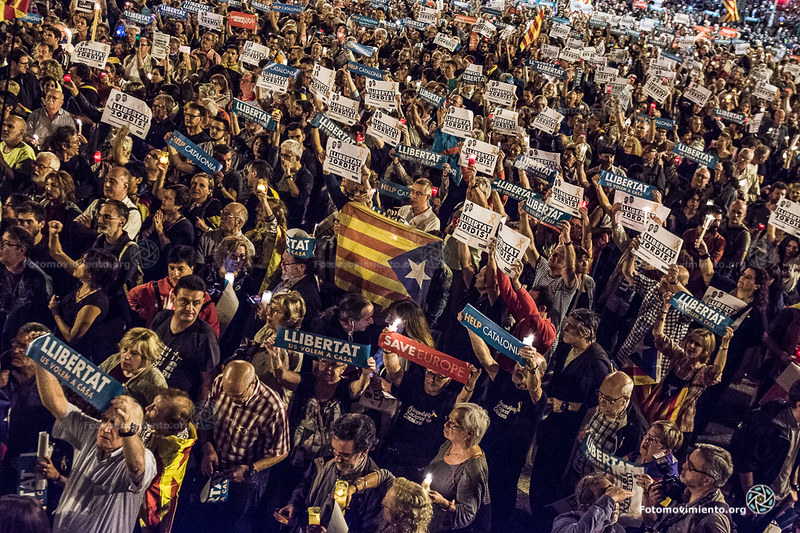 AMNESTY INTERNATIONAL has condemned the conviction of Catalan civil society leaders Jordi Sànchez and Jordi Cuixart for sedition by the Spanish Supreme Court and demanded their immediate release.

In a report published today [19 November], the non-governmental organisation described the sentencing of the two grassroots pro-independence figures – who were sentenced in October for their role in Catalonia’s outlawed 2017 independence referendum – as violating their rights to freedom of expression and peaceful assembly, and demanded their immediate release.

Amnesty’s intervention follows the publication of the NGO’s analysis of the Supreme Court’s judgement, which saw nine figures involved in the 2017 referendum given sentences ranging from nine to 13 years.

“It is clear that the Supreme Court’s interpretation of the crime of sedition was overly broad and resulted in criminalizing legitimate acts of protest.” Amnesty International senior policy advisor Daniel Joloy

According to Amnesty, these sentences were the result of a vague definition of the crime of sedition, with which Spanish authorities have also charged exiled former Catalan minister Clara Ponsati, who appeared at Edinburgh Sheriff Court last week in response to renewed efforts for Spain to secure her extradition. Amnesty has dismissed Spanish authorities’ interpretation of sedition as overly broad and dangerous.

Commenting, Amnesty International senior policy advisor Daniel Joloy said: “Jordi Sànchez and Jordi Cuixart must be released immediately and their convictions on the charge of sedition must be quashed.”

“Whilst our analysis did not find any factors suggesting that the trial as a whole was unfair, it is clear that the Supreme Court’s interpretation of the crime of sedition was overly broad and resulted in criminalizing legitimate acts of protest.”

Amnesty maintains that Sànchez and Cuixart had the right as private citizens as leaders of civil society organisations to organise peaceful meetings in support of the 2017 referendum and Catalan independence, even if the purpose of these meetings or any other of their actions was to prevent the enforcement of a judicial resolution.

Amnesty argues that these actions fall constitute peaceful civil disobedience, and that charges of the kind brought against them unduly restrict their rights and breach international law. Therefore, the nine-year sentences given to the pair represent a “disproportionate restriction” on their rights, given that Spain’s Supreme Court has failed to demonstrate the proportionality of their sentences.

Amnesty’s intervention follows arguments made by Clara Ponsati’s lawyer Aamer Anwar who, following her release on bail on 14 November, told press: “Sedition is the archaic offence invented in the 16th century court of Europe, by kings and queens who feared a backlash from people demanding their freedom.

“Sadly for Spain, in Scotland – like most democracies – the crime of sedition no longer exists.