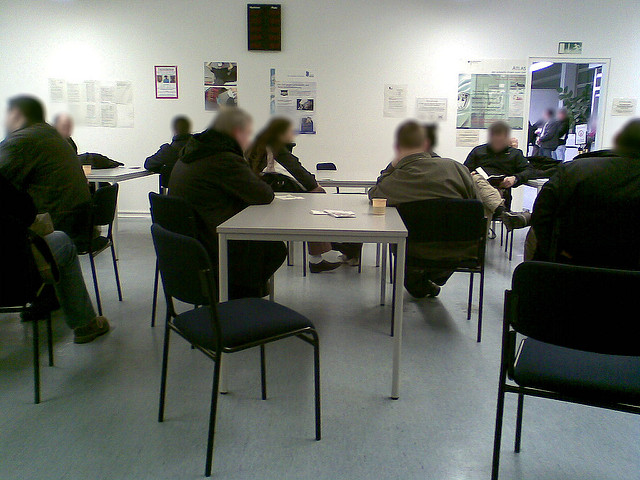 Judy Wilkinson, allotments campaigner, says grassroots organisations need a form of democracy which inspires, encourages energy and innovation, and does not get bogged down in pointless rules and bureaucracy

WE ARE in times of chaos and turmoil with fear being spread by the media, by the decisions of those in power and a general feeling of helplessness.

As a response to this overwhelming chaos many are turning to rules and regulations to make themselves safe. Schooling, jobs, even leisure activities reinforce the belief that if we follow the rules we will be safe, we will not get into trouble.

So…members of small organisations like allotment associations spend time trying to build a safe haven, tinkering with the existing structure and trying to exclude anything that disrupts or challenges the perceived reality.

Examples of this are found in the minutiae being discussed and embedded in a proposed new charity Constitution (expanded from three to over 20 pages)  “ The President of the SCIO should act as chairperson of each members’ meeting. If the President of the SCIO is not present within 15 minutes after the time at which the meeting was due to start the Vice-President shall act in his/her place.”

An updated rule for a small allotment association: “Fruit trees and bushes should not be allowed to be taller than 3.0m at the start of the growing season”. This provoked a discussion about whether the allowed height should be 2.5 m or 3.m.  Does “During periods of drought/low rainfall, members may attach a hose to the nearest tap, but only if other members are not requiring it to fill watering cans. Hoses should not be left attached, unattended” need to be a rule or should there be a general agreement about good behaviour on site?

Organisations need both a ‘design’ structure and an ‘emergent’ structure. Design structures are described in the official documents (constitution, standing orders, rules and regulations) and provide stability. Emergent structures are created by the organisations informal networks and communities of practice, they provide new ideas and creativity, enabling the organisation to change and evolve. There is always a tension between the two structures, both are necessary but at the moment, for many small organisations, the balance between design and emergence is being lost. The design structure is dominant with an emphasis on hierarchy, power and control.

How do we get a balanced, minimal design structure together with an emergent structure in which tolerance and inclusion, neighbourliness, politeness, good communication, respect and diversity are valued? How do we build a community where people interact, get to know each other and listen to each other’s point of view?

READ MORE: Could the increasing use of participatory budgeting in Edinburgh be just what local government needs?

Do we need a new approach that is not a retreat into a paradigm we already have, tinkering with existing ways of governance, authority and control?  Do we need the courage to consider a paradigm shift with new ways of working together? Laloux in ‘re-inventing Organisations’ describes current organisational models in terms of colour; street gangs and mafias are examples of ‘red’ tribal organisations; the Catholic church, military and public school system are amber; modern global corporations are described as ‘orange’; ‘green’  organisations have emerged based on empowerment, values driven culture and inspirational purpose. Laloux advocates a “teal” organisation  built on the creation of a shared space, safe from judgement where we don’t just  listen in order to gather information so as better to convince, fix or dismiss ideas but where we really listen to each other and find collectively our purpose, strategy and action.

In 2015 the Scottish Government put participation and engagement at the heart of public policy. As part of this they supported and encouraged community groups to study a course from MIT based on  Otto Scharmer’s ‘Theory U’, which begins by transforming the enemies of change – judgement, cynicism and fear. Several groups benefited from this course  but it has not yet engaged local authorities and small local organisations. The cultural shift that is necessary to achieve change has not taken hold across wide sectors of our society.

In 2018 the Government introduced Democracy Matters, a conversation about how people are involved in decision making processes that affect their lives and the public services they rely on. CommonWeal has used this opportunity to propose ‘Development Councils’ as a new system of local democracy. It is an exciting, detailed package of measures that could democratically transform Scotland’s communities. At the heart is a project based approach that would enable people and groups to come together in support of a project they feel is useful.

READ MORE – Judy Wilkinson: Can allotments be a disruptive force for change in Scotland?

To make this work we need to question, positively and constructively,  the institutions of leadership, authority, power, permission and whether the existing design structures for organisations and local authorities have served their purpose and should be abandoned or changed. The experiences of teal organisations based on the current understanding in biology, neuroscience and physics of cognition and connections should be driving the way we work together.

One example was in 2001 when software engineers produced the Agile Manifesto based on twelve principles several of which are directly relevant to the change that are needed, which included that: “Business people and developers must work together daily throughout the project.”

The Community Empowerment (Scotland) Act 2015  advocates participation not just consultation, e.g.: “Build projects around motivated individuals. Give them the environment and support they need, and trust them to get the job done.”

POLICY: Development Councils – A Proposal For A New System Of Local Democracy In Scotland

CommonWeal’s Development Council proposals are for a project based approach to local democracy, it stated: “The best architectures, requirements, and designs emerge from self-organising teams…At regular intervals, the team reflects on how to become more effective, then tunes and adjusts its behaviour accordingly.”

‘Theory U’ develops these ideas.  It finds that design structures evolve through emerging structures, adding: “Simplicity – the art of maximizing the amount of work not done – is essential.”

This is crucial because we are mired in complexity and this should be the mantra for all organisations.

Donald Trump and others are trying to find a safe haven through bullying and eliminating all dissent. We should build safe havens for everyone through organisations based on trust, transparency and understanding. Change is coming and there are good models to enable it to happen positively, constructively and for the good of all.