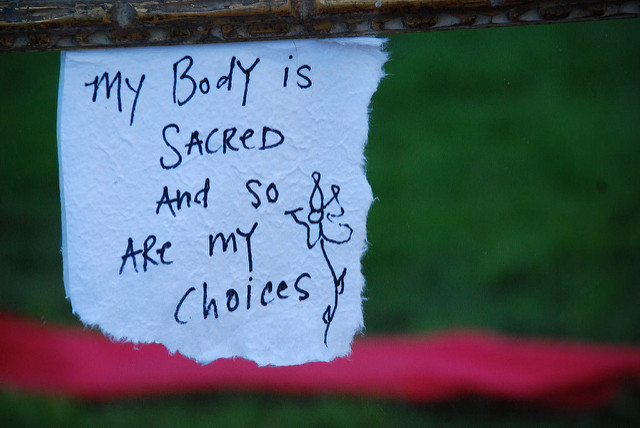 Julia Swann, writing on behalf of a group of pro-choice students at the University of Strathclyde, argues that attempts by a ‘pro-life’ group on campus to secure students’ union funding through threatening legal action must be resisted.

FOR MANY, students’ unions are a place of safety and sanctuary.  Much of my experience as a student at University of Strathclyde has been shaped by my involvement in the students’ union.  As a woman, I have always valued the pro-choice stance of the students’ union which, thankfully, still stands today.

It is a privilege to have the opportunity to study in an institution whose students’ union defends bodily autonomy and access to safe and legal abortion in a political climate which sadly, for many, is increasingly oppressive and misogynistic.  However, the students’ union’s pro-choice policy has been under attack for a number of years by a small group of students, represented by a society which is currently unaffiliated with the student’s union.

By threatening legal action against University of Strathclyde Students’ Association (USSA) for denying funding on the grounds that their group represents a view which campaigns for criminalisation of and prevention of access to abortion (which the United Nations classifies as torture), this group has held to ransom a charitable organisation which is designed to protect the wellbeing of over 22,000 students.  Alarmingly, the pro-life group has allegedly received financial support from far-right groups out-with the UK in order to fund their battle against a policy which has been democratically voted for and implemented for the safety of the student population.

The recent threats of legal action against USSA demonstrate the self-serving nature of this group – it exists solely to propagate and spread opposition to the bodily autonomy of anyone with a uterus, and similar groups have been known to attempt this by distributing misinformation and exposing vulnerable people to graphic images, many of which are misleading.  Though the ‘abortion debate’ is often divisive, USSA has consulted the student population several times on this issue, and thankfully the pro-choice policy has been defended by the majority of students via Student Parliament over the last few years.

As a result of the threat of legal action, it was proposed that USSA remove the clause in the pro-choice policy preventing affiliation of groups which promote the criminalisation of abortion. This proposal resulted in a tied vote. Unfortunately, rather than following UK Conventions in the event of a tied vote, a casting vote was given (by a male chairperson) and the proposal was passed, allowing the pro-life group to apply for affiliation. Requests to refer the issue to a referendum were ignored by the chair.

The litigious behaviour of the group of pro-life students at University of Strathclyde is disturbing and demonstrates the lengths that they will go to to promote a belief which is inherently oppressive and a threat to the physical and psychological safety of students.  Whilst USSA rightly encourages fair debate and offers a platform to a diverse range of groups, it stands to reason that a group whose views have the potential to cause harm to fellow students should not receive financial backing from an organisation which aims to ensure the safety and wellbeing of University of Strathclyde students.

The presence of a pro-life group on campus would be severely detrimental to student wellbeing and provide a platform for misinformation and allow for the intimidation of vulnerable students who may be experiencing physical or emotional difficulties as a result of unplanned pregnancy, abortion, or miscarriage.