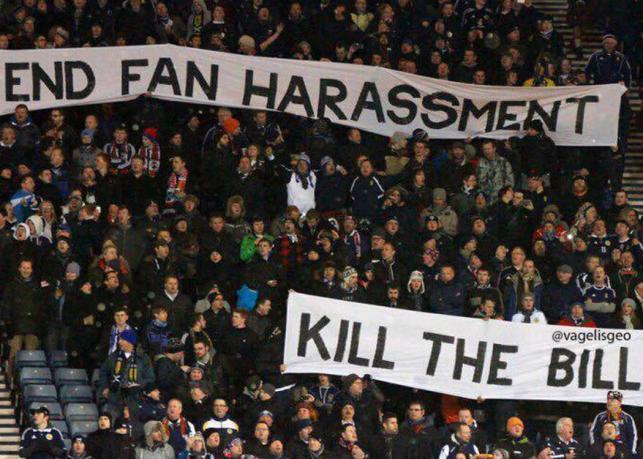 THE JUSTICE COMMITTEE of the Scottish Parliament has published its Stage One report on the Repeal of the Offensive Behaviour at Football and Threatening Communication (Scotland) 2012 Act (OBFA), recommending the repeal.

The five SNP MSPs on the committee opposed the repeal, albeit agreeing that “constructive amendments” to the Act should be brought forward, while the six MSPs from the opposition parties voted to scrap it altogether.

The first vote in parliament on the repeal, proposed by Scottish Labour MSP James Kelly, will take place next Thursday.

The OBFA, which aims to address the issue of sectarianism and offensive behaviour in and around football matches, was passed in 2012 without cross-party support and has proven to be politically difficult for the Scottish Government.

The legislation has been met with criticism from fans’ groups as well as a number of legal and civil liberties organisations due to the discretion it affords to police, the perception that it creates a hierarchy of offences by setting it apart from existing hate crime legislation, and inconsistency in its application.

Fans Against Criminalisation (FAC), a campaign group set up in response to the act, has hailed the committee’s decision: “The overwhelming message which was given to the Justice Committee was that the Act was unnecessary, illiberal, damaging to police-fan relations and potentially in breach of the European Convention on Human Rights.

“In light of this, the Justice Committee has today recommended the Repeal Bill to the Parliament. We call on all MSPs to recognise that this law is bad law, it is a failure and it needs to be repealed as a matter of urgency so that the injustice meted out to young football fans can stop and the damage which it has caused can begin to be repaired.”

The FAC spokesperson continued: “This also leaves the way clear for a sensible and mature discussion to take place which addresses those social issues which the Act was alleged to be about but which have been advanced not one iota since 2011.

“Having campaigned against this Act for close to seven years, we now look forward to the next stage in the process (amendments) and the eventual Stage 3 vote which will see this ‘stain on the reputation of the Scottish legal system’ finally removed.”

The committee began hearing oral evidence on the Act in October, with contributions from police, legal experts, fans, and equalities and human rights organisations.

Labour’s James Kelly MSP welcomed the committee’s recommendation and said this was thanks to “the weight of evidence against the Football Act”.

Kelly said: “From day one, the Scottish Government pushed through this botched legislation to make it look like ministers were taking action on sectarianism, despite it being made crystal clear at the time that the Football Act was not a viable law.

“The unfortunate reality is the Football Act has completely failed to do anything ministers promised. Its only achievement is breaking down trust between fans and the police.

“The SNP has the opportunity to wake up to the mess they have created, back my Bill to repeal the Football Act and instead look again at worthwhile methods to tackle sectarianism.”

Several equalities organisations expressed concerns about repealing the Act without putting in place an alternative, including Stonewall Scotland, the Equality and Human Rights Commission, and the Scottish Council for Jewish Communities, as well as Victim Support Scotland.

The Minister for community safety and legal affairs Annabelle Ewing reiterated the Scottish Government’s opposition to a repeal, which she said would send the “wrong message”.

She said: “The evidence in this report clearly shows that a range of organisations have highlighted real concerns to MSPs about depriving our law enforcement agencies of this legislation completely without putting a viable alternative in place.

“We share those manifest concerns that repeal will send entirely the wrong message, leaving vulnerable communities feeling exposed to abuse and prejudice and putting Scotland behind the rest of the UK in terms of protection from incitement to religious hatred, currently provided by section six of the Act.

“Singing songs about terrorism, mocking incidents involving loss of life and being hateful towards some of our most vulnerable communities with no regard for the impact of their wilful behaviours is not acceptable in a modern Scotland.”