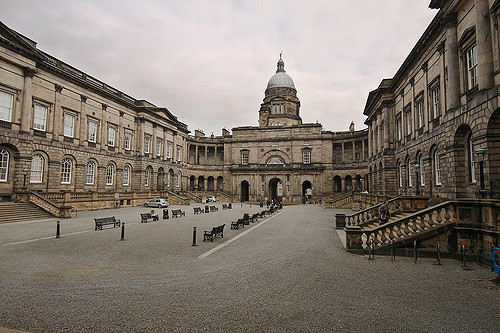 – Speakers will include a diverse range of legal authorities, activists and advocates

THIS WEEKEND will see a new student-run conference at the University of Edinburgh, bringing together some of Scotland’s most prominent legal authorities, campaigners and human rights advocates to examine the relationship between law and the common good.

Speaking to CommonSpace, Gray explains how he hopes the conference might reframe some people’s thinking about the law: “Organising ‘Justice for All’ was my personal response to my early impressions of the Scottish legal community.

“Given the inevitability of constitutional flux in the years ahead, the legal community should play a renewed part in informing public debate and pursuing reform in the public interest.” Conference organiser Michael Gray

“As a new student, in the first week of my course, I attended the university’s Law Fair – which is one of many opportunities for larger corporate and commercial law firms to advertise their career opportunities. These are often the legal organisations with the greatest resource to promote themselves to students, and have the benefit of offering the highest volume of ‘traineeships’ (the two year process required to qualify as a solicitor) for students.

“There is also a vibrant non-commercial sphere to Scots law with various public, private and charitable organisations focused on public, criminal, housing, migration, and labour law (to list a few), as well as the overarching implications of human rights law. I thought it’d be great to have a conference that offered students – and anyone else interested – the opportunity to meet people and organisations who cared about those issues. Our conference sold out well in advance largely through online word-of-mouth, so clearly there is enthusiasm.

“It’s exciting that we’re not alone in that. Last week [9 February] the second ‘RebLaw Scotland’ conference took place with support from Glasgow University Law School, and there are different Student Law Clinics engaged in similar work across the country. The Justice for All conference is only for a day – but I hope it leads to more people supporting the range of organisations already doing work in these areas. If it goes well, I hope it can continue.”

“How much support are we willing to provide for tenants, asylum seekers, social security claimants and others trying to survive the labyrinth of legal tribunals and appeal processes?” Conference organiser Michael Gray

In a country where 7,391 out of 9,519 (77.6 per cent) of practicing solicitors of the Law Society of Scotland work in private practice, where income is largely driven from a private client base, the legal profession can often be focused on the administration and commercial management of private interests – sometimes at the expense of social justice concerns. Yet it is concerns such as these that Gray hopes the conference will be able to explore.

Gray continues: “Justice for All raises various questions about access to justice. With legal aid funding under pressure, what are we prepared to pay to fund the defence of the criminally accused? How much support are we willing to provide for tenants, asylum seekers, social security claimants and others trying to survive the labyrinth of legal tribunals and appeal processes? What impact do high civil court case costs have? Legal policy questions bring with them social consequences, and these are not inevitable.”

Scotland needs legal reforms, Gray argues, but also provides a unique staging ground for future change, particularly given the prominent question of Scottish independence within our constitutional discourse: “Legal reform matters. Many within the legal community campaigned for Scottish devolution because they believed it provided the opportunity for long-delayed legislative reforms that had gathered dust at Westminster.

“Given the inevitability of constitutional flux in the years ahead, the legal community should play a renewed part in informing public debate and pursuing reform in the public interest.”

Registration and the full programme for Justice For All are available on Eventbrite.