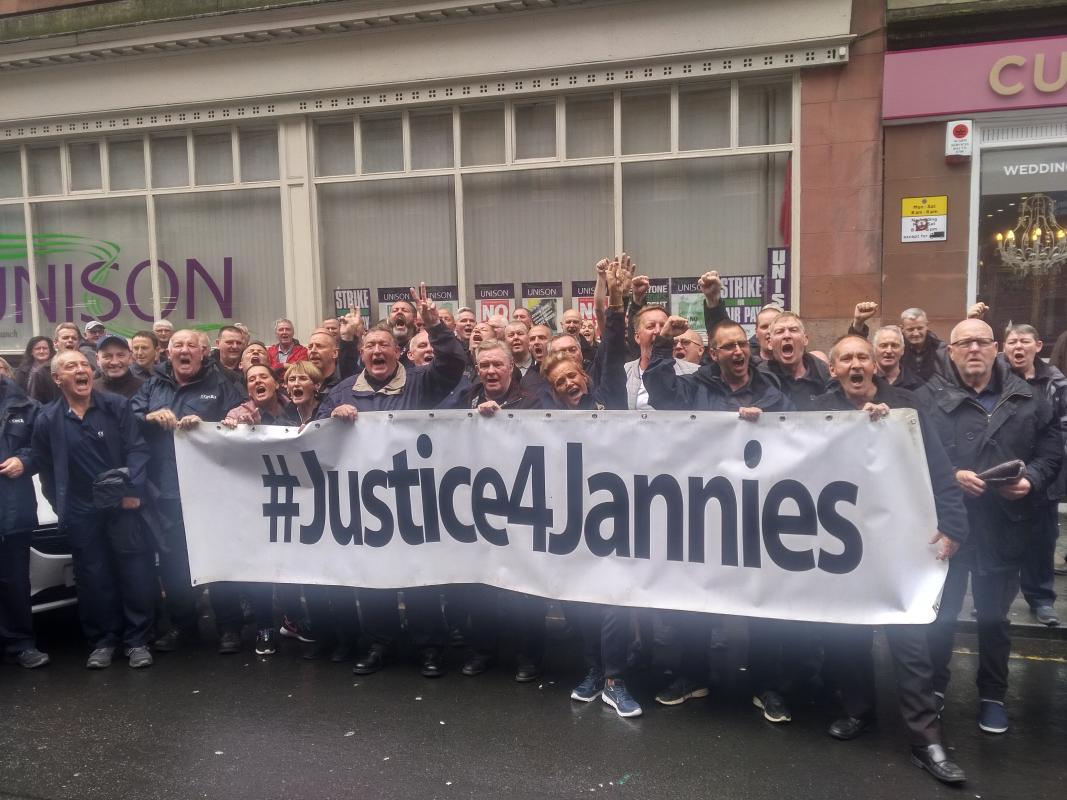 JANITORS in Glasgow claimed victory today after a long-running dispute over pay and conditions with their employers Cordia.

“We’ve won a dispute and we’ve got more money than we asked for, we’re working less hours.” Brian Ash

Glasgow primary school janitors began strike action last year, claiming unfair working conditions as they believed performance-related payments were not being made for tasks that fell outside their remit.

The janitor who raised the industrial action, Bran Ash said: “Its unprecedented. We’ve won a dispute and we’ve got more money than we asked for, we’re working less hours and there’s going to be 12 new posts created.”

Ash said: “It started in March 2015, I was at a meeting with (Glasgow Unison secretary) Brian Smith. I knew we were due a payment for something, I just didn’t know what it was.

Despite industrial action commencing looking only for “working context and demands payments” the janitors will commence with better working conditions and pay thanks to the action.

Unison said the Justice for Jannies campaign had scored a six per cent pay rise for all janitors across Glasgow, that will see all janitors’ pay rise £1,184.

Further guarantees of keeping ‘one janitor to one school’ will be maintained whilst relief janitors will be offered permanent positions.

In addition, weekly working hours will be decreased from 41.5 hours to 40 hours.

“As a group, we’ve stood up to Cordia and the council. I’m pleased that the fight’s over, and I’m relieved that it’s over.” Brian Ash

Ash said: “I’m obviously very pleased and happy that the dispute has come to an end, I’m more thankful to the rest of the members for sticking together knowing we were entitled to the money.

“As a group, we’ve stood up to Cordia and the council. I’m pleased that the fight’s over, and I’m relieved that it’s over.”

The deal will see janitors paid for duties they claimed were out of their responsibilities including heavy lifting and using dangerous materials. They successfully claimed other council employees were paid extra for these duties and janitors will now be paid in accordance from today.

196 janitors will move from a Grade 3 to Grade 4 for taking on duties they had always performed, but hadn’t been receiving payment for from the council.

12 vacancies currently open will be filled and five new relief posts will be created. The end to the dispute comes the day before the new school term begins tomorrow in Glasgow.

A statement from Unison said: “The dispute shows that workers can win if they are determined and organised, supported by their local branch and the wider the trade union, escalate strike action when necessary, involve the wider community and build pressure on elected politicians at key points.”

“This dispute was allowed to drag on far too long by the previous administration.

“We promised parents and pupils this would be a priority for the City Government. Today’s agreement means we start the new school year with a deal that works for the janitors, the Council and Glasgow’s schools.

“I am confident that this delivers a fair and sustainable justice for the jannies, alongside service reform without being unfair to other staff groups.

“I am grateful to the workforce, trade unions and officers who have worked hard with to bring about this resolution with their efforts across the summer; along with our City Treasurer Allan Gow and City Convener for Workforce Feargal Dalton.”