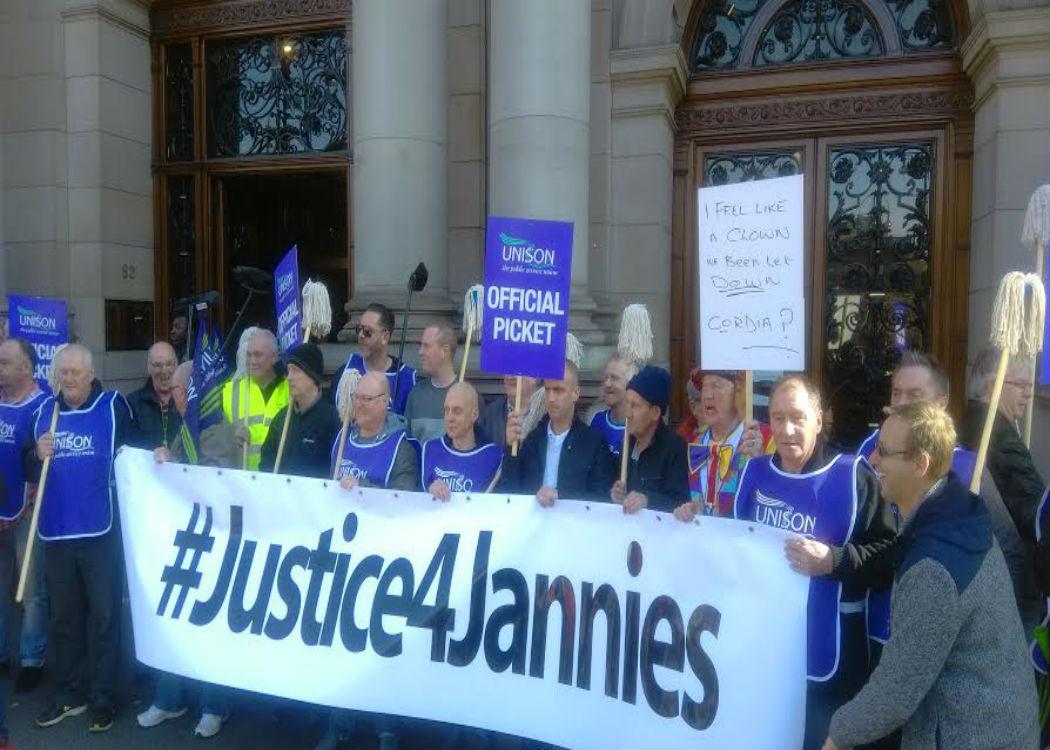 Janitors in the Unison union demonstrate at Glasgow City Chambers

AROUND 100 primary school and nursery janitors have protested outside the offices of Glasgow City Council to coincide with their three day strike over pay.

The Glasgow janitors, who are members of the Unison trade union, have supported the strike by around 95 per cent according to union officials.

The unprecedented industrial action has come about due to a dispute over payment for the performance of tasks which fall out-with the remit of the janitors usual work. These duties include litter picking, heavy lifting and dealing with dangerous materials, for which council employees typically receive a special rate of pay.

The company which pays janitors on behalf of the council, Cordia, has refused to meet with janitors to discuss their demands for full payment for these duties.

Brian Smith Glasgow Unison secretary, speaking to CommonSpace at the demonstration, said: “This is the first day of a three day strike, we hope that the council and Cordia management get back round the table. If they don’t the union will call these workers back out for further action.”

“I’m not aware of school janitors striking on their own over an issue, so this is unprecedented. So we would hope that the leader of the council Frank McAveety would talk to the managers at Cordia, to get back round the table with Unison and agree a settlement.”

The Janitors had support for their strike and demonstration from teachers unions EIS and NASUWT, from Unison members in other field of educational work and form parents at many of the facilities effected.

Dave Moxham, deputy general secretary of the STUC said: “Janitors are in most circumstances working on their own, it’s been really good that they’ve been able to organise together in recent months. It’s important they know they are part of a wider struggle against austerity and for decent working conditions which engages workers in the public and the private sector.

“No one would envy local authorities which are managing cuts to their budgets. But that doesn’t absolve them of their responsibilities to their workforces.”

Donald Low, janitor at St Rose of Lima in Criagend said: “This is an injustice that we have suffered since 2006, it’s regarding dirt money and payment we aren’t receiving. Cordia are refusing to budge on the matter. Other workers within Glasgow City Council get this [pay]. Lollipop people get it for standing out in the cold, road sweepers get it for clearing up dirt and the same jobs we do and we’re not getting paid for it, we’re not getting that money.

“It’s been an injustice for too long, and you can see by the support today a lot of people agree with us. We’re on strike for 3 days from now till Wednesday, if we don’t get anywhere and they don’t get round the table then we’ll be back on strike again. They’ve got to get round the table and negotiate with us, and we’re prepared to do that.”

The strike will continue for until 16 March, and will be accompanied by further protests at the City Chambers and at the Cordia headquarters in Glasgow.