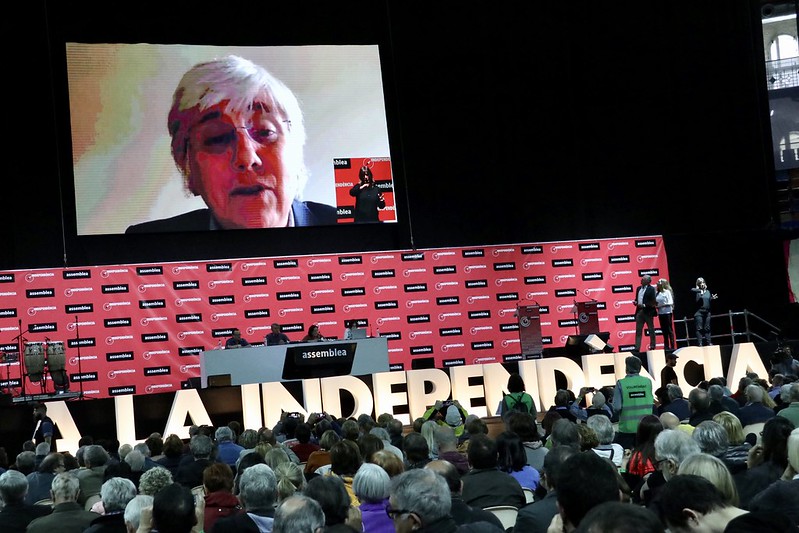 Following Brexit, the exiled former Catalan minister is now officially one of the five new MEPs gained by Spain

EXILED former Catalan minister Clara Ponsati received her accreditation as an MEP in Brussels this morning [5 February], defying Spanish efforts to ensure measures were taken to prevent her leaving the UK ahead of her extradition hearing.

The St Andrews academic and former education minister has been charged with sedition by Spanish authorities over her role in Catalonia’s outlawed 2017 independence referendum, and is has been preparing to fight Spanish attempts to extradite through Scottish justice.

Ponsati picked up her credentials today at the Brussels centre of the European Parliament in the company of former Catalan President Carles Puigdemont and her fellow ex-minister Toni Comin, both of whom are also MEPs for the pro-independence JxCat party.

Reportedly, Ponsati’s trip to Brussels was without incident or obstruction, and the process of receiving her accreditation was speedier than expected, despite a ruling earlier this week by the Spanish Supreme Court calling on the UK to enforce precautionary measures to “prevent her departure to another country” and to press on with the processing her European Arrest Warrant.

The development further frustrates the Spanish electoral commission, which demanded that Ponsati take her constitutional oath in Spain, where she would be subject to arrest, warning that her seat an an MEP would otherwise be left vacant. Nevertheless, Ponsati’s position as an MEP has now been recognised by the European Parliament.

Upon leaving the parliament building, Ponsati told press that “justice has been done today”, before thanking the European Court of Justice for the precedent it set in its judgement on the case of former Catalan vice-president and current MEP Oriol Junqueras last December.

READ MORE: ‘A lengthy battle lies ahead’: Clara Ponsati to appear in court ahead of extradition hearing

Ponsati’s now-official status as an MEP – triggered by the UK’s departure from the EU, which boosted Spain’s representation by five parliamentarians – will likely bolster the arguments of her lawyer, the Scottish human rights advocate Aamer Anwar, who stated last month that her new position would grant her immunity.

Speaking after a preliminary hearing at Edinburgh Sheriff Court last month, Anwar said: “At present, Spain is set to be awarded five extra seats. If that is so, Clara Ponsati is on the list to be one of the five MEPS and will become an MEP shortly after January 31 and therefore she will have immunity.

“The Spanish authorities ought to withdraw the warrant against Clara if and when she becomes immune – this is not likely to happen.

“When Clara becomes an MEP an assessment will be required to be carried out as to how it will affect the warrant proceedings – especially if once again Spain shows no respect for the rule of international law.”

Spanish Supreme Court judge Pablo Llarena has already requested that the European Parliament withdraw Ponsati’s immunity, arguing that the UK’s departure from the EU means that such immunity “does not reach the territory of [the UK].”

The question of whether Ponsati’s parliamentary immunity extends to the UK is expected to be considered at her next court date in Edinburgh on 5 March. The full hearing of her case is expected to begin on 11 May.