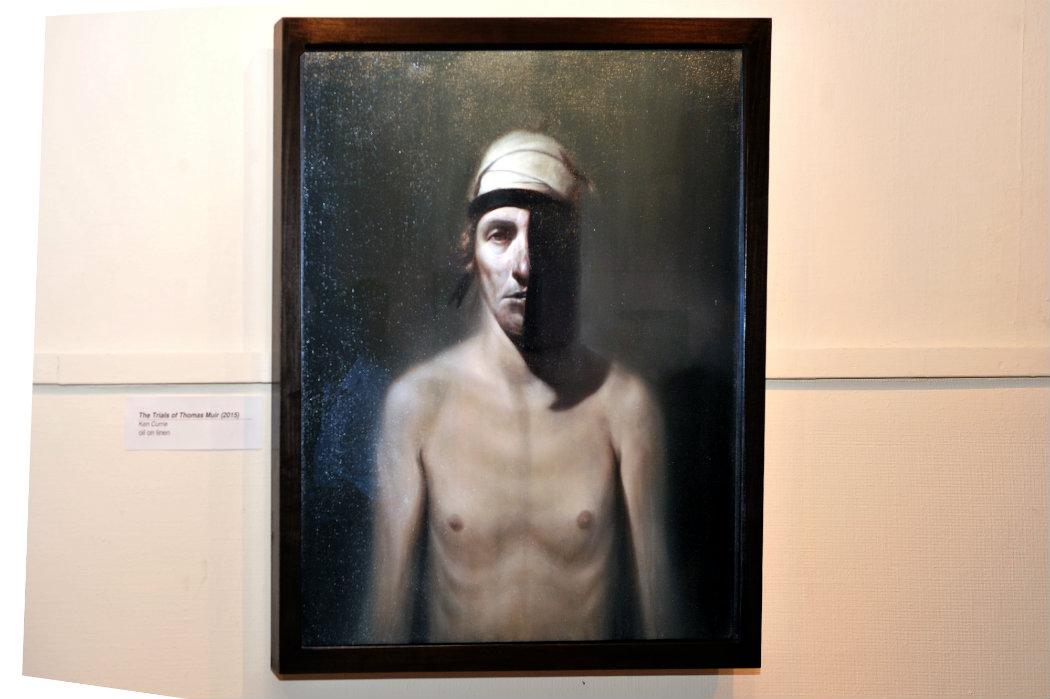 Muir, born on August 24 250 years ago, is being celebrated at events across Scotland

THE HERO of one of Scotland’s first campaigns for democracy has been unveiled in his first publicly commissioned portrait – exactly 250 years after his birth.

Thomas Muir, who campaigned for constitutional and social reform, was the inspiration behind a new portrait by renowned artist Ken Currie.

‘The Trials of Thomas Muir’, unveiled yesterday [Monday 24 August] in Milngavie, East Dunbartonshire, depicts Muir suffering from injuries sustained from a canon ball shot while he was escaping from his sentence in Australia.

The portrait was created to fill a vacuum of art celebrating Muir, who is considered a father of Scottish democracy.

A portrait of Muir originally hung in Huntershill House, but the portrait went missing and is presumed lost or hidden in a private gallery.

“I still think there are anti-democratic forces at work in this country today. They are a lot of people in the higher echelons of British society who would be quite happy for us to get rid of democracy and let them run the show.” Ken Currie, artist

Now Currie’s portrait, commissioned by East Dunbartonshire Leisure and Culture Trust, will remain on public display in Milngavie and Kirkintilloch galleries, honouring his upbringing in the local area.

Artist Ken Currie told CommonSpace what inspired his interest in Muir: “It was when I started to learn more about Thomas Muir’s life and his Odyssey, which was absolutely epic, and the circumstances of him coming to France at the end of his life and dying there.

“It was particularly the fact he was welcomed in France by one of my favourite painters of all time – Jack Louis David – who painted another portrait of a political martyr in The Death of Marat.

“Marat was not the same as Muir. He was one of the guys who instigated the idea of terror. That was a dark side of the democratic battles that were fought. With that one tiny detail that Jack Louis David may have painted Muir, the whole idea came alive for me.

“It was also that he had this terrible injury to his face. A lot of the work I had been making was about the amazing portraits that Henry Tonks drew of First World War victims who had terrible facial injuries.

“The incredible tragedy of these men who came back from the trenches was that they were ostracised because of their injuries. Anything to the face was taboo and horrific. When I discovered that Thomas Muir had equally received this dreadful injury to his face from canon shrapnel and he had to wear this strange mask for the rest of his days, it was too good to let pass as a visual image.”

On Muir’s political significance for modern Scotland, Currie said: “It’s important to understand that the democracy we enjoy was hard won and not to be complacent about it or take it for granted. We must be active in our democracy. We must participate in our democracy. It’s what people like Thomas Muir gave their lives for.

“I still think there are anti-democratic forces at work in this country today. They are a lot of people in the higher echelons of British society who would be quite happy for us to get rid of democracy and let them run the show.

“It’s so important that we keep Thomas Muir’s ideas alive for the present day.”

Peter McCormack, who helped to commission the portrait in his role as museum development officer, spoke at the event.

He described the portrait as “a work that will resonate down the years to come. Thomas Muir was a man local to these parts and special to Scotland and this portrait, as the title suggests, is full of his suffering endured in the cause of parliamentary reform, but overflowing also, in my opinion, with humanity, nobility and dignity.”

Celebrations of Muir are planned across Scotland over the next two months as part of the ‘Thomas Muir 250’ festival.

Today [Tuesday 25 August], the Faculty of Advocates – from which Muir was expelled due to his radicalism – will co-host a re-enactment of Muir’s famous show trial.

Muir, who in his 20s led The Friends of the People movement advocating for universal suffrage, was targeted by the political and judicial establishment.

In 1793 he was sentenced to 14 years ‘transportation’ for his political beliefs and exiled to Australia.

Alongside other ‘Scottish martyrs’, Muir was transported to Australia in a prison ship.

Despite escaping from his sentence as part of a daring voyage, Muir died in revolutionary France where he continued to plot for political change in Scotland.

Events surrounding the anniversary can be found on the Thomas Muir 250 website .