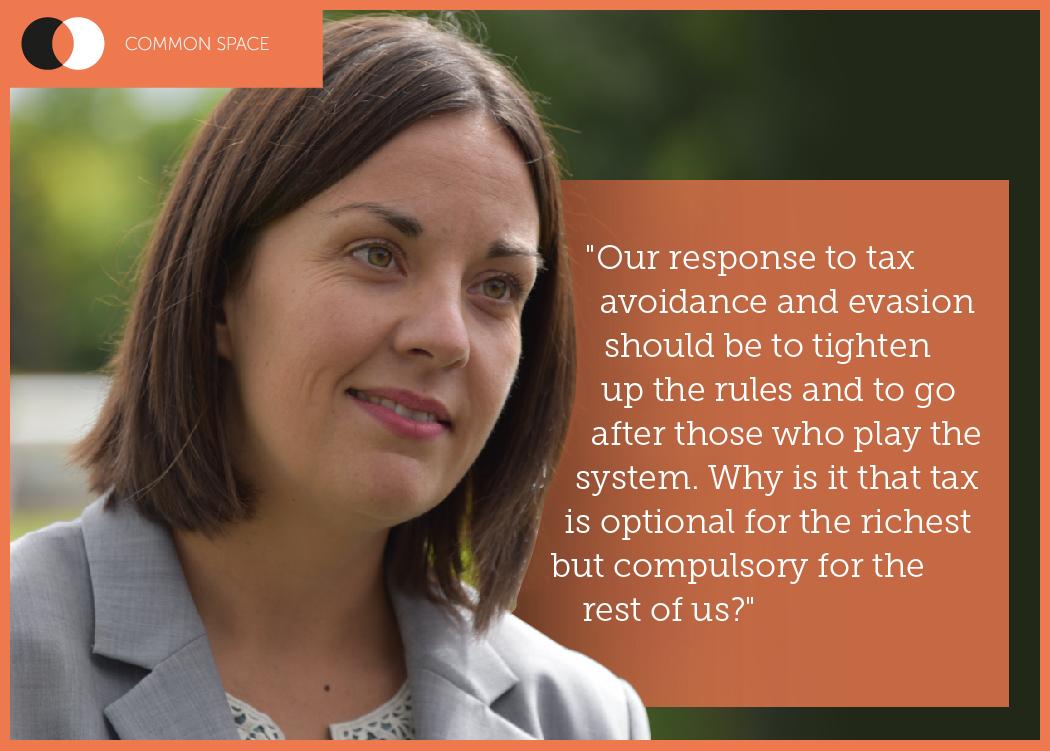 WHEN the vast majority of people read about the Panama Papers my sense is that their first reaction is anger. People are rightly angry that the rich and powerful are hiding their wealth in tax havens. Angry at one rule for them and another for the rest.

That was certainly my reaction. I thought about the injustice of massive cuts in public spending we are facing as a nation. The last few days have made me even more determined to ensure that the top one per cent pay more so that we stop the cuts and invest in the future of our economy.

Our response to tax avoidance and evasion should be to tighten up the rules and to go after those who play the system.

Our response to tax avoidance and evasion should be to tighten up the rules and to go after those who play the system.

We’re having the same debate in Scotland. Last year the SNP supported bringing back the 50p top rate of tax, reversing the tax cut George Osborne gave to the top one per cent. Nicola Sturgeon said she supported it across the UK, and supported using the new tax powers of the parliament. She said it would raise billions for public services.

Now, when the power to bring in a 50p top rate has come to Scotland, she is against it. Where once she argued that it would raise billions she now says it would cost millions. While she once argued the rich should pay their fair share, she now says it’s not worth trying because they’ll just try to avoid paying.

Why is it that tax is optional for the richest but compulsory for the rest of us?

When the rich try to cheat the taxpayer we shouldn’t just treat it as an inevitability, we should hold them to the same standards as we do anyone else in society. Does the government shrug its shoulders in the face of a benefits cheat? Does it write off small tax underpayments for ordinary workers? It doesn’t, and it shouldn’t.

The proportion of income going to the top one per cent has been increasing all of my life. How much longer are we going to tolerate growing inequality on the basis of the richest writing their own rules?

When the rich try to cheat the taxpayer we shouldn’t just treat it as an inevitability, we should hold them to the same standards as we do anyone else in society.

The similarities between George Osborne’s arguments when he abolished the 50p tax rate and the document published by Nicola Sturgeon to justify her U-turn are striking. In many places the excuses offered by the SNP are nearly word for word the same as those the Tories make. They are also just as wrong.

We hear that the rich will flee to other developed economies with lower taxes. Flee from Scotland and flee from the UK. But even basic research shows that raising the top rate of tax over 45p would not make us an outlier on taxation. Of the OECD club of 34 developed nations 20 have top rates of tax over 45 per cent. Twelve have rates of 50 per cent or over. These include the nations whose economies and societies the SNP told us they wanted Scotland to emulate: Sweden, Denmark, Finland.

What is remarkable from nationalists is that there is no judgement made of those who, assuming they believe their argument is true, would abandon their country rather than contribute to its success. Where has the moral argument for fair taxes gone?

Just as Labour across the UK is making the case for taking on the tax havens, a Labour Scottish Government would make sure the richest are held to the same standard as the rest.

I think the SNP underestimates Scottish voters by imagining that we would never vote for progressive taxes where we all have a stake but the richest pay the biggest share.

We’d reverse George Osborne’s tax cut for the wealthiest few and restore a 50p top rate of tax on earnings over PS150,000 a year. As part of our broader tax plan, we would use that money to stop the cuts and invest directly in our schools. To grow our economy and give our people the skills they need to compete for the jobs of the future we must invest in education.

It is incredible that the SNP, who complained so loudly about austerity, now argue for a tax plan that would not see anyone pay a penny more in income tax and which would actually see higher earners pay less.

I think they underestimate Scottish voters by imagining that we would never vote for progressive taxes where we all have a stake but the richest pay the biggest share. I also think they are underestimating popular anger at the unequal standards that apply to the richest compared to the rest of us.

Those who want to use their first and second votes to ensure that we use the tax powers of the Scottish Parliament to do things differently can use those votes for Scottish Labour.