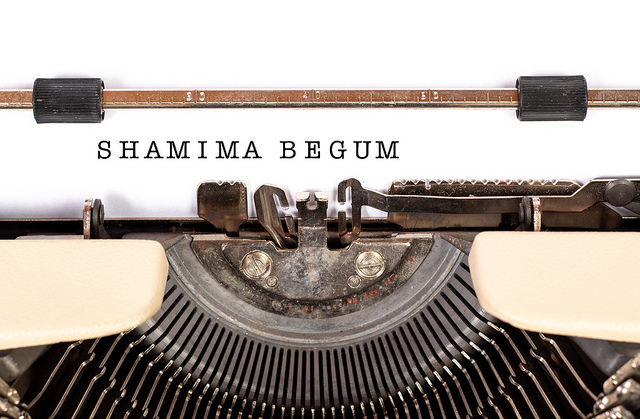 Writer Kezia Kinder says that the actions of the British state towards Shamima Begum and her now deceased son Jarrah are callous and cowardly, and say something profound about Britain as a country

HE DIED aged just 18 days. Reports indicate that he turned blue and cold, and passed away in the early afternoon of 8 March 2019.

His name was Jarrah.

Jarrah was the third child of Shamima Begum.

Begum has said that when she left the UK, she was looking for a stable family life where she could practice her Islamic beliefs freely. ISIS promised her a family; a husband, a home, and a place she could raise her future children according to her religious beliefs.

That future was a fantasy – ISIS lost its territory, and Begum has been left living in a refugee camp, trying to survive.

Begum is now caught between the disintegration of her fantasy and the brutality of British state revenge: stripped of British citizenship, she has nowhere to go.

The result is a triple tragedy. The two children born to Begum whilst living in ISIS territory died of illness and malnutrition. Neither made it to the age of even three. Her third baby, born just days before Begum was stripped of UK citizenship, died last week, aged just 18 days old.

At the age of 19, Begum is now stateless, homeless, grieving and almost completely alone.

The actions of the UK Government, seemingly fuelled more by a desire to score political points and appease a frothing-at-the-mouth tabloid press, of the past four weeks have been nothing short of callous, and their cowardice utterly deplorable.

While Begum should have been repatriated, de-radicalised and integrated back into UK society, she has been scapegoated by a headline-seeking government intent on making her an example.

READ MORE: Jonathon Shafi: Here’s what Katie Hopkins and Isis have in common

Scores of would-be jihadists have already returned to the UK from Syria and Iraq; as single males they can travel alone and use multiple different points of entry to the UK. Indeed, if Begum had not been heavily pregnant, she would most likely have been able to return the UK as many men have done already.

Instead she made the monumental mistake of speaking to the press in a desperate attempt to return to the UK for the sake of her health and that of her then-unborn babies.

It isn’t just Begum; hundreds of foreign women and children remain trapped in refugee camps in Syria and Iraq, unable to leave the camps and return to their countries of origin. France, Belgium, the UK, the Netherlands – all have refused to repatriate or otherwise assist these women and children to return home.

Abandoning citizens – particularly children – has never and will never be the mark of a civilised society, irrespective of what they or their parents may have done.

Instead of seeking to appease the Daily Mail, the UK Government need to be looking at why so many young people travelled to Syria and Iraq to join ISIS in the first place. The first step towards achieving this is surely to speak to those who have made the journey, and to listen to them instead of judging.

“It sends a message to those from ethnic minority backgrounds across the UK; ‘you don’t really belong here, you belong in the country your grandparents grew up in’.”

Would a happy, settled young person with a real sense of belonging in the UK really travel half way around the world to a warzone? It’s doubtful. People like Shamima Begum could shed more light on the radicalisation of young people than any academic study will.

Instead, the UK Government, by stripping citizenship from ethnic minorities who left for Syria and Iraq, are telling them that they don’t belong in the UK.

This doesn’t just send a message to the scores of UK citizens in Iraq and Syria, it sends a message to those from ethnic minority backgrounds across the UK; ‘you don’t really belong here, you belong in the country your grandparents grew up in’. It tells you that you’re British by a technicality, and that it could easily be taken away.

After a lifetime of alienation and discrimination, this could easily be the tipping point for already marginalised young people to become radicalised.

Shamima Begum could still be de-radicalised. The UK could give the chance of a productive life to a battle-scarred young woman, who has experienced so much pain and loss.

Yes, this woman has made monumental mistakes, but the mark of a decent society is to give her the opportunity to put right these mistakes.

We have already let down baby Jarrah; we cannot make the same mistake again with his mother.