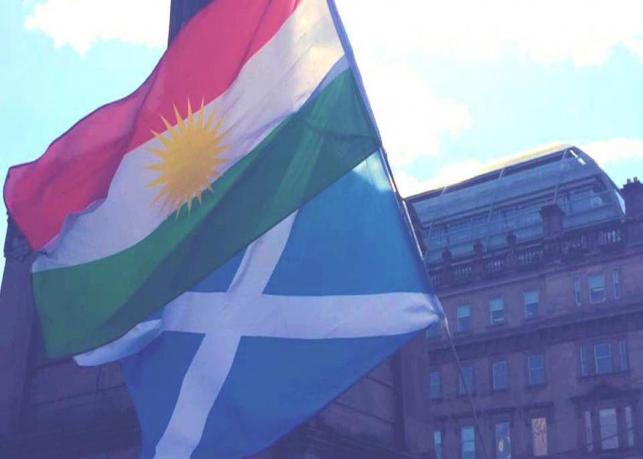 THE Kurdish Community Centre and a number of Kurdish families in Edinburgh experienced raids by plain clothes police officers in the early hours of Wednesday (30 August) morning.

Scottish Solidarity with Kurdistan and the Kurdish Community Centre condemned the raids as “an open form of racism” and have said that they believe that pressure from the Turkish consulate is behind the raids.

Police confirmed that searches were carried out as part of an ongoing investigation into possible support or fundraising for the PKK, or Kurdistan Workers’ Party, which is classified as a terrorist organisaton.

The events form part of a politically fraught situation, as a decades-long conflict in Turkey continues.

A statement from the Kurdish Community Centre said: “Families were woken from bed by six plain clothes police officers citing terrorism laws and waving a document that accuses a member of the family of participating in a terrorism activity on 26 March 2017.

“This so called terrorist activity was in fact a celebration of Newroz (the Kurdish New Year). Later, a forced entry was used to raid the Kurdish Community Centre in Wester Hailes, Edinburgh, despite the police being told that the key holder would be there in 20 minutes.

“Families were left upset and scared and children prevented from going to school.” Kurdish Community Centre

“As with similar raids last year, no arrests were made and no evidence of connection with terrorism was discovered. Families were left upset and scared and children prevented from going to school.”

The Turkish government has been condemned by the European Court of Human Rights for numerous human rights abuses of Kurdish civilians, including torture and forced displacements, and systematic arrests of political dissenters.

The PKK has been in an armed conflict with the Turkish state for over 30 years, with the initial intention of creating a seperate state of Kurdistan, and now with the aim of bringing about equal rights for Kurdish people in Turkey.

At present the PKK is classed by the EU as a terrorist organisation, although it is not classed as such by the UN and debate around the designation continues.

A police spokesperson said: “On Wednesday 30th August, Police Scotland executed search warrants at a number of addresses in the Edinburgh area in connection with an ongoing investigation.

“We understand local communities may have concerns as a result of this activity but would like to reassure people that this activity was intelligence led and not in relation to any immediate threat or risk.

“No one was arrested or charged as a result of these searches and enquiries are continuing. As this is now a live investigation, Police Scotland is unable to comment further at this time.

“Since 2001, the PKK has been a proscribed terrorist organisation in the UK. This means that membership of the PKK is a criminal offence within the UK, as is any attempt to support or fundraise on behalf of the PKK.

“If any member of the public has information in respect of this, or indeed any other terrorist activity, we would encourage them to report this to the police.”

The community members claim, however, that they have no links to any organisations, that their connections are to each other as a community, and that they are “a community that, above all, wants peace”.

Some in the community believe that they are being targeted simply because they are Kurdish, and because authorities are unfairly viewing Kurdish identity and community under the banner of terrorism, thereby limiting their ability to gather and to celebrate their Kurdish heritage.

Representatives of the community centre explained that the community had always felt included and welcomed in Scotland and that their relationship with the police in Scotland was relatively positive until the Turkish consulate opened.

The Kurdish Community Centre said: “Since the Turkish Consulate has been established in Edinburgh, they have put in every effort and energy to intimidate our community by criminalising both us and our centre.

READ MORE: Sarah Glynn: More than ever we need to show our support for Kurds and others under threat around the world

“This is the second time we have been labelled, targeted and questioned by the police. We therefore believe the police are under the pressure and influence of the Turkish consulate who are bringing the intimidation tactics of the Turkish Government to Scotland.

“This is an open form of racism. It is against our most basic human rights. We are a migrant community and have already suffered many years of injustice. We no longer want to face policies of denial and discrimination.”

The raids come at a time when the community centre is still recovering from numerous attacks of vandalism- the centre’s shed was recently burned down- which they believe has been targeted against them due to racism.

The Kurdish Community Centre and Scottish Solidarity with Kurdistan have called on MSPs to support them as a migrant community and protect their human rights in Scotland.